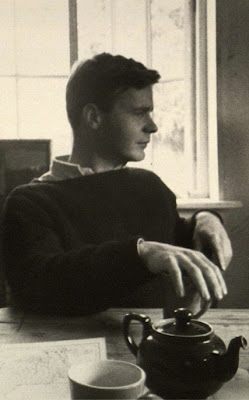 Whole orchards, boughs knotted
with fruits of coral & gold—to be eaten, Thoreau believed,
in the wind.

Whose ‘bloom’ rubs off in pockets


Neither orchards of the east, in lichened
walls, or west
hedged in eucalyptus—

bounded only by slopes of oak
& of maple,
the woods-apple comes sweet from the hills, both spring

& tint
of ‘apple
color’
—but wild may brindle

And Thoreau, out of “Wild Apples”:

I have seen no account of these among the “Fruits and Fruit-Trees of America,” though they are more memorable to my taste than the grafted kinds; more racy and wild American flavors do they possess, when October and November, when December and January, and perhaps February and March even, have assuaged them somewhat. An old farmer in my neighborhood, who always selects the right word, says that “they have a kind of bow-arrow tang.”

The Saunterer’s* Apple not even the saunterer can eat in the house. The palate rejects it there, as it does haws and acorns, and demands a tamed one; for there you miss the November air, which is the sauce it is to be eaten with. . . .
These apples have hung in the wind and frost and rain till they have absorbed the qualities of the weather or season, and thus are highly seasoned, and they pierce and sting and permeate us with their spirit. They must be eaten in season, accordingly,—that is, out-of-doors.
To appreciate the wild and sharp flavors of these October fruits, it is necessary that you be breathing the sharp October or November air. The outdoor air and exercise which the walker gets give a different tone to his palate, and he craves a fruit which the sedentary would call harsh and crabbed. They must be eaten in the fields . . . What is sour in the house a bracing walk makes sweet. Some of these apples might be labelled, “To be eaten in the wind.”

And, under Thoreau’s rubric “Their Beauty”:

. . . some a uniform clear bright yellow, or red, or crimson, as if their spheres had regularly revolved, and enjoyed the influence of the sun on all sides alike,—some with the faintest pink blush imaginable,—some brindled with deep red streaks like a cow, or with hundreds of fine blood-red rays running regularly from the stem-dimple to the blossom-end, like meridional lines, on a straw-colored ground,—some touched with a greenish rust, like a fine lichen, here and there, with crimson blotches or eyes more or less confluent and fiery when wet,—and others gnarly, and freckled or peppered all over on the stem side with fine crimson spots on a white ground . . .

The mysteriousness of Johnson’s “rust like / rock” somewhat dispelled by Thoreau’s making that rust lichenaceous. The sense of something indubitably Hopkinsesque about Johnson’s “brindle” goes, though, un-dislodged by seeing its source in Thoreau: is it because Hopkins’s line “skies of couple-colour as a brindled cow” (“Pied Beauty”) seems to provide Johnson with the lovely “tint / of ‘apple / color’,” too (‘apple color’ unfound in Thoreau)? A final gleaning of Thoreau (found whilst looking for a trigger to Johnson’s sequence “Whose ‘bloom’ rubs off in pockets // like wild horses / broken in . . .”):

I explore amid the bare alders and the huckleberry-bushes and the withered sedge, and in the crevices of the rocks, which are full of leaves, and pry under the fallen and decaying ferns, which, with apple and alder leaves, thickly strew the ground. For I know that they lie concealed, fallen into hollows long since and covered up by the leaves of the tree itself,—a proper kind of packing. From these lurking-places, anywhere within the circumference of the tree, I draw forth the fruit, all wet and glossy, maybe nibbled by rabbits and hollowed out by crickets and perhaps with a leaf or two cemented to it (as Curzon an old manuscript from a monastery’s mouldy cellar**), but still with a rich bloom on it, and at least as ripe and well kept, if not better than those in barrels, more crisp and lively than they. If these resources fail to yield anything, I have learned to look between the bases of the suckers which spring thickly from some horizontal limb, for now and then one lodges there, or in the very midst of an alder-clump, where they are covered by leaves, safe from cows which may have smelled them out. If I am sharp-set, for I do not refuse the Blue-Pearmain, I fill my pockets on each side; and as I retrace my steps in the frosty eve, being perhaps four or five miles from home, I eat one first from this side, and then from that, to keep my balance.

Thoreau’s wry humor, a “harnessed” humor. Too, there’s Thoreau’s sense of natural intransigence: “When I see a particularly mean man carrying a load of fair and fragrant early apples to market, I seem to see a contest going on between him and his horse, on the one side, and the apples on the other, and, to my mind, the apples always gain it.” Possible source of the horse.


* Like Johnson constructing something new out of some stray “gripples” of Thoreau (see: “the custom of grippling, which may be called apple-gleaning, is, or was formerly, practiced in Herefordshire. It consists in leaving a few apples, which are called the gripples, on every tree, after the general gathering, for the boys, who go with climbing-poles and bags to collect them”), in “Walking” Thoreau offers a found (see Guy Davenport’s insistence, writing of Johnson, that “Invention . . . means finding”) definition of sauntering:

. . . which word is beautifully derived “from idle people who roved about the country, in the middle ages, and asked charity, under pretence of going à la sainte terre”— to the holy land, till the children exclaimed, “There goes a sainte-terrer”, a saunterer—a holy-lander. They who never go to the holy land in their walks, as they pretend, are indeed mere idlers and vagabonds, but they who do go there are saunterers in the good sense, such as I mean. Some, however, would derive the word from sans terre, without land or a home, which, therefore, in the good sense, will mean, having no particular home, but equally at home everywhere. For this is the secret of successful sauntering. He who sits still in a house all the time may be the greatest vagrant of all, but the Saunterer, in the good sense, is no more vagrant than the meandering river, which is all the while sedulously seeking the shortest course to the sea.

Out of the 1827 edition of the Encyclopaedia Londinensis:

To SAUNTER, v. n.   [aller à la sainte terre, from idle people who roved about the country, in the middle ages, and asked charity under pretence of going, à la sainte terre, to the holy land; or sans terre, as having no settled home.]   To wander about idly; to loiter, to linger.—The cormorant is still sauntering by the sea-side to see if he can find any of his brass cast up. L’Estrange.

** Wild apple-seeking made kin to manuscript hunting (Davenport, of Johnson: “The knowledge he likes to teach us is indeed knowledge all but lost . . .”). Curzon: Thoreau owned a copy of A Visit to Monasteries in the Levant (1849), by the English traveler, diplomat and manuscript collector Robert Curzon (1810-1873). In the “oil-cellar” of the monastery of Souriani, Curzon reports fossicking through “a small closet vaulted with stone which was filled to the depth of two feet or more with the loose leaves of . . . Syriac manuscripts:

Here I remained for some time turning over the leaves and digging into the mass of loose vellum pages; by which exertions I raised such a cloud of fine pungent dust that the monks relieved each other in holding our only candle at the door, while the dust made us sneeze incessantly as we turned over the scattered leaves of vellum. I had extracted four books, the only ones I could find which seemed to be tolerably perfect, when two monks who were struggling in the corner pulled out a great big manuscript of a brown and musty appearance and of prodigious weight, which was tied together with a cord . . .