Nothing is certain. A high barrier of cumulus floccus clots up big: white curds in the sky. Marking off the intertidal zone: hundreds of common periwinkles anneal’d to the rocks. Water-color’d shrimp in the pot-sized pools, water’s own flagellant. The aimless lethargy of the vacant masses invariably disappoints the theorist, goodbye. Goodbye to radical doubt, its spooky un-registering look of the single heart-scourging predicament, the look of the blind. Goodbye to the aerial ways of earthly release, the moto perpetuo of the God-smithy’d millions, smote with regal forbearance to smite in its turn, sand-bagging up a laugh in Kandahar. Goodbye to the God-damn’d hounds. A stunt’d black juniper skews out like an incisor, ocean-pointing. Up where the creamy vestiges of sun drench the yellow expanse of lawn, a three-prong’d sprinkler flings out its own lazy ropes of water.

High cirrus tails irremeably smutch the colossal blue. Down here: three crows up to no good. Raucous caws of the lookout. The dog points, dangles a paw brokenly, at the ready. Feign’d nonchalance breech-load’d for the flush. Kafka, in a meager 1917 letter to Felix Weltsch, talks of ‘the clandestine labor of an oppressed proletarian race to whom the night belongs.’ Some appalling comedy of mice in the woodwork, it turns out. Night’s persistent latency, its dogma. (See Erasmus’s 1534 pun against the cynics: ‘wonte to defende their dogmies styfly with tothe and nayle.’) Whence the sketch-leniency of morning’s pre-arrival light? Refused acquittal against charges of contempt, you go incessant, and industrious, against the day. Hazarding the noisy buckshot obdurato of a fowling piece, its recoil under the tender white media of noon. Dogged to the end. 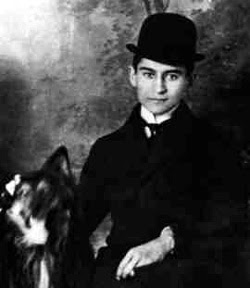