Neo-polar. Out of Jean Echenoz’s “Nine Notes on Fatale”: “What is a roman noir? . . . the term originally referred to what were also called Gothic novels, a genre initiated in the eighteenth century. Eventually it came to apply only to the type of literature known as crime fiction, a form whose invention, as Walter Benjamin pointed out, coincided with the advent of photography, which meant the end of anonymity in that it made it possible, notably for the purposes of oppression, to identify individuals.” Thinking that, with the “advent” of the unmitigated and unapologetic surveillance state, so cavalierly ignored, one’d see a new genre, something determined to snarl the circuitry, expose the incipient brutishness of any total system.


And (Echenoz), noting how deftly Manchette avoids the (ever-continuing) nineteenth c. stink of psychological realism, “confining himself to the most concrete indications of posture, attitude, or tone of voice. The personality and thoughts of the protagonist must be deduced only from their physical relationship to the world, their material interaction with objects.” Très Dashiell Hammett, that. One thinks of Hammett’s “Personville”—pronounced “Poisonville”—in Red Harvest precisely at the point of reading the name of the setting “Bléville” (“literally, Wheatville, but blé in a slang sense means money. The town’s name is thus something like Doughville”—according to a note by the translator.) Of killer “Aimée Joubert” (“We see her roles and social attitudes proliferate even though we are never offered the slightest psychological interpretation”), Echenoz writes: “she switches the brand of her cigarettes—Celtiques, Dunhills, mentholated Virginia—almost as readily as she does her surname.”


The Baron Jules, inhabitant of “a kind of manor”—totally rundown, unkempt and neglect’d—“a tiny manor burdened down with Lilliputian pepper-pot and pinnacle turrets” with one enormous room “crowded with sideboards, tables, cupboards, seats, sofas, knickknacks, and large cardboard boxes bearing such legends as BLACK AND WHITE and HÉNAFF LUNCHEON MEAT—JACK TAR’S TREAT” (and other rooms piled with cases of whiskey and cartons of English cigarettes), the Baron (whom Aimée initially meets after wandering off at a party chez Bléville’s major industrialist: the Baron is busy peeing against the industrialist’s wall (“The urine could be heard continuously battering the wallpaper. A dark puddle was forming on the bronze-green carpet between the two booted legs of this interloper.”) The Baron, it the manor fill’d with lift’d SNCF hand towels, and “glasses bearing Mobil and Martini logos,” partial to ramblings like: “When I break this decanter of mine . . . I’ll replace it with one with advertising on it . . . I am very interested in promotional items and free gifts . . . Also in trash. I have no income, you see, and a man with no income is bound to take a great interest in free gifts and trash . . . Given the present state of the world . . . with the increase of constant capital as compared with variable capital, a whole stratum of the poor is bound to be unemployed and live off free gifts and trash, and occasionally off various government subsidies . . .” Or, later: “So just fight bravely on, most gracious master of capital! . . . you shall be allowed to rule for a short time. You shall be allowed to dictate your laws, to bask in the rays of the majesty you have created, to spread your banquets in the halls of kings, and to take the beautiful princess to wife—but do not forget that ‘Before the door stands the headsman!’”


The socialist Manchette’s late disillusion with any nuanced political solution. One of Bléville’s community “stalwarts” (dispatch’d with at the end) is a journalist for one of the two local newspapers (“one of them championed a left-capitalist ideology; the other championed a left-capitalist ideology”). Political efficacy reduced to seizing the dough. Echenoz: “There is a sense in which the project of the heroine, Aimée Joubert, is a political one. A project of the most stripped-down form imaginable: to take money where it is to be found. It is the rich that interest Aimée; she goes only where there is money. In appropriating that money by taking advantage of the contradictions of its possessors, whom she eliminates in the process, she applies a radical and brutal logic which puts the death of the wealthy to profitable use.” (Or, as Aimée puts it to the baron: “The real assholes can be killed.”) 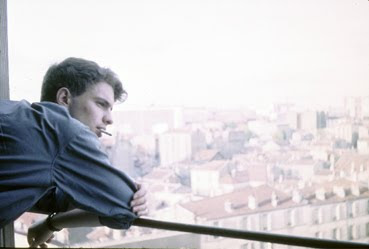