Finish’d another roman noir by Jean-Patrick Manchette, the Donald Nicholson-Smith translated Three to Kill (City Lights, 2002). (Originally: Petit bleu de la côte ouest, 1976.) At the beginning of the novel one Georges Gerfaut (name means “gyrfalcon”), who’s down’d several glasses of Four Roses bourbon and “two capsules of a powerful barbiturate” (“The combined effect on him has not been drowsiness but a tense euphoria that threatens at any moment to change into anger or else into a kind of vaguely Chekhovian and essentially bitter melancholy, not a very valiant or interesting feeling”) is speeding along Paris’s outer périphérique extérieur in a “steel-gray Mercedes” with “Rube Bloom and Ted Koehler’s “Truckin’” . . . playing, as recorded by the Bob Brookmeyer Quintet.” Manchette:

The reason why Georges is barreling along the outer ring road, with diminished reflexes, listening to this particular music, must be sought first and foremost in the position occupied by Georges in the social relations of production. The fact that Georges has killed at least two men in the course of the last year is not germane. What is happening now used to happen from time to time in the past.

Manchette’s fierce lack of deceit and clarity of means. He’s written (in “Five Remarks on How I Earn My Living,” translated by Mitchell Abidor) about the difference between what he calls “the mystery detective novel” and “the roman noir.” In the former, “crime disturbs the order of the law, which it is crucial must be restored by the discovery of the guilty party and his elimination from the social field. The investigation might well reveal the evil desires of almost every character, but these desires are inherent to human nature . . . The private (and preferably amateur) detective is a more appropriate hero than the official police, who are a public enterprise . . . The investigator . . . will also occasionally consume cocaine or cassoulets, and will play chess or perhaps the violin, in this way being able to bear eternal evil and (demonstrating his own humanity) sacrificing to it.” In the latter:

. . . the order of the law is not good; it is transitory and in contradiction with itself. Phrased differently, evil dominates historically. Evil’s domination is social and political. Social and political power is exercised by bastards. More precisely, by unscrupulous capitalists, allies of or identical to gangsters brought together in organizations, having in their pay politicians, journalists, and other ideologues, as well as justice, the police, and other henchmen. And this throughout the land where these people, divided into clans, fight among themselves by all means possible to gain control of markets and profits. We can recognize here a more or less analogous image of capitalist society in general to the one we find in revolutionary critiques. This is obvious.

However, “less obviously and yet surely”: “the roman noir is characterized by the absence or weakness of the class struggle and its replacement by individual action (which is, incidentally, hopeless). While the bastards and the exploiters in fact hold social and political power, the others—the exploited, the masses of people—are no longer the subject of history, and in any case only appear in the roman noir in minor roles, more or less socially marginalized . . .” Taxi drivers, “déclassé intellectuals,” &c. Manchette’s rather bitter humor (amidst alienation.” The poster in the office of Gerfaut’s boss Charançon (the name means “beetle”: “he wore a tiny Lions Club de France badge . . . and Pierre Cardin suspenders”) with “pretty painted pink flowers and the English words HOME SWEET HOME inscribed in large, pale, pink frilly letters.” A poster superimposed with text by ITT Corp. president Harold "Hal" Sydney Geneen:

In different locations around the world, almost anywhere on the globe, rather more than two hundred workdays each year are given over to executive meetings at different levels of our organization. It is during these meetings, be they in New York, Brussels, Hong Kong, or Buenos Aires, that decisions are taken based on logic, on a business logic that leads to choices that are almost inevitable, for the simple reason that we are in possession of almost all the basic elements needed to arrive at decisions. Just like our planning, our periodic meetings are designed to clarify the logic of things and expose that logic to the light of day, where its value and necessity will be apparent to all. This logic is immune to all state laws and regulations. It is a part of a natural process.

Follow’d by Manchette’s remark: “There was no way of telling whether the presence of this poster . . . testified to a discreet sense of humor or to a terminal state of alienation.”(Think, too, of the typical policier’s reliance on logic, and “immunity.”) Early in Manchette’s Journal (Gallimard released the enormous initial volume, dated “1966-1974” in 2008—one wonders if it might eventually be consider’d Manchette’s magnum opus), he begins a habit of noting the day’s news items big and small. Commentary by selection and juxtaposition. Thus, in Three to Kill, Georges Gerfaut scans France-Soir (“to clarify the logic of things”?):

The paper’s suggested lottery numbers were three, seven, and twelve. Tanks and air power had been deployed against six thousand rebellious Bolivian peasants. An Eskimo had been shot and killed while trying to divert a Boeing 747 to North Korea. A Breton trawler had gone missing with its eleven-man crew. A woman had celebrated her hundred birthday and announced her intention of voting for the left. Extraterrestrials had abducted a dog in full view of its master, a crossing guard in the department of Bas-Rhin. And, in emulation of a recent fad on American’s West Coast, a couple had tried to fornicate in public on a French Mediterranean beach, only to be restrained and arrested by the local police.

Whence Manchette’s Gerfaut glances at “the funnies” and tosses the thing away. 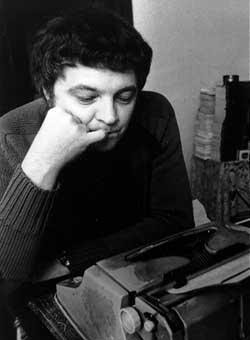 Isn’t it simply that such royally insipid outmodedness of ‘stance’ at the ramparts is bound to be trounced by one’s own brooding and obfuscatory remorse? Sovereignty’s own jealously-assigned etude-binge of the rapt skeptic’s insouciance thus goes defamatory and resolute. And the usual facticious batting at the dying earthly airs stirs up no relief, no sop, no dismay whilst its proxy sidereal demesne, the moon, famously engorges itself with borrowed light. I muff the protocol. I wad up and shoot. I apply my inconsiderable promo-enthusiasms to the works of madmen. My naïveté refuses to respond to anything beyond the general filthiness of the machine. There’s no merit to hindsight: the rotted bungee cords, the morally-questionable booster with untold millions to spend, the larks, the spurs. In the retro-modernist rehash, its frivolity of means, its sure ‘purchase,’ the twenty-first century’s goaded into a capital state. Minimal dignity is refusal.