He’s ‘fatt’d the kites with offal’—thus concludes the amass’d jury, dun-scarf’d against identity. Like a Kafka germ, ‘it smels of mortalitie.’ Tired of the allegory of the word, its unavoidable soilure and ruin oppugn’d by the supposèd avoirdupois of pristine use: if the road unimpeded arrives at the vaunt’d weathercock, why, go. And go with no onus of going, for vasty and indifferent the lingo be. Such profuse and tender renewals of the pocky albeits innumerable. So: a singular morning, daftly accommodating the sun’s regalia, eases up out of the slate-color’d ocean with the massy bulge of a landlubber. The marina’s boats shine white and bob, filigree’d stickpins of the washy expanse. Guilty of the trick’d out aggrandizement of the ne’er-do-well, the meretricious mess of the ‘egregiously deceived.’ Say melancholia made me a dynamo. Say a jackdaw’s a certain sign of excess. End with the deadpan recital of a bagatelle. ‘All be yt he coulde not saye naye.’

Fabulist reveries. Loss of focus. Nights slowly reading Marguerite Young’s Miss MacIntosh, My Darling with its swirls of hallucinatory detritus, the immiscible certainties utterly sunk by the sheer wanton pressure of reverie itself, “embarrassing collusions of the phantom and the fact, fugitive coordinations,” “realities always outdistancing verifications”—“There were many first editions of poets, some in the dead languages, a gramophone with Edison’s first record, water lilies in a crystal bowl of which the waters had not been changed for years, an ebony writing desk inlaid with mother-of-pearl where she had started to write a letter yesterday or years before, her portrait in a ruby-colored riding habit, her falconer’s gloves embroidered with mystical birds which should be laid upon a gate-leg table lighted by a beaded lamp, her white parasols of which she had so many and alike, the latest magazine which he might care to read L’Illustration of a decade ago, for example, opened at the seventh page and covered with dust.” Astonishing that Scribner’s print’d the whole enormous difficult thing in 1965. It is apt to reconvene my arguments against minimalism, though it’s hard to avoid the argument of Roberto Calasso in K. (2005): how Kafka “sensed” that:

. . . only the minimum number of elements of the surrounding world ought to be named. He plunged the sharpest Ockham’s razor into the substance of the novel. To name the bare minimum, and in its pure literality. And why so? Because the world was turning back into a primeval forest, too fraught with strange noises and apparitions. Everything had too much power. Thus it became necessary to limit oneself to what lay closest at hand, to circumscribe the zone of the nameable. Then all that power, otherwise diffuse, would be channeled there, and whatever was named—an inn, a file, an office, a room—would fill with unprecedented energy.

Which so precisely fits with my sense recently of the world’s cumbrance . . . I am dragging “back” a pack-mule’s worth of books, trying to cease my constant impractical “textual surveillance” that renders half-ass’d and “mimsy” all reportage. (The end to the “O, what a rogue and peasant slave am I!” school of quotidian writing: “distraction in's aspect, / A broken voice . . .”) “To circumscribe the zone,” that was the first heave. (Calasso: “Kafka’s intolerance for big words. If uttered by a young woman, breathlessly, he had the impression that they emerged ‘like fat mice from her little mouth.’”) Spare parsimony against the lovely ostent of parsimoniousness, the word, its prodigality number’d in its own vocables. Don’t, as they say, count on it. (‘All be yt he coulde not saye naye.’) 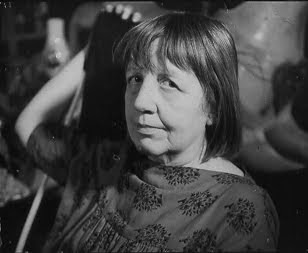