Eliot represented a high sophistication, as Noel Coward represented a low sophistication for those who were not serious-minded. He gave a histrionic remove. The poem suffered in its very success. It had been cut and reorganized to succeed, and had lost in its conscious form whatever unconscious form had made for the confusion of sequence, the “miscellaneous pieces” that did not seem to fit. “These fragments I have shored against my ruins.” Out of whatever real ruin that threatened, Pound and Eliot had agreed finally upon the monumental artifice of a ruin, a ruin with an outline. “Complimenti, you bitch,” Pound writes Eliot: “I am wracked by the seven jealousies, and cogitating an excuse for always exuding my deformative secretions in my own stuff, and never getting an outline. I go into nacre and objets d’art.”

Duncan faulting the “ruin with an outline” (incompatible with organic form, lacking the authenticity of “unconscious form”), the nacreous bauble. Pound faulting the way, without an outline—like the one he provided Eliot by constructing The Waste Land out of Eliot’s own “miscellaneous pieces”—one’s own “deformative secretions” go to pearl-making, objet d’art-ism, a truc “not serious-minded.” (Though Duncan sees Pound—contra Eliot—as “a serious character.”) (Regarding objet d’art-ism: somewhere Duncan admits approvingly how Williams—in Paterson (“the summation of the work of a personal artist as a thing in itself”)—“is revealed as no connoisseur of the poem as art object in itself but as a visionary, reawakening in poetry once more transcendent themes and implications”—two statements caught in a crossfire, too.) Frankly, it’s hard to see if it’s Eliot’s “histrionic remove” or The Waste Land’s “very success” or the way the poem provided a template “literary needs of new young men . . . climbing in culture” that disturbs Duncan. How read Duncan’s concern about “sophistication” (“low” or “high”—isn’t it modernism’s task to mix the two? Duncan: “The heart of the poem was the unbearable mixing of things”) against remarks like: “The footnotes may have done the damage, as Eliot believed later. They sent readers to look up the sources, not to find the fountain of feeling back of the poem, but to add to their know-all. For a new class in America that now fill our departments of English, bent upon self-improvement, anxious about what was the right book to refer to, Eliot, having his own like proprieties, became a mentor.” It’s as if Eliot’s own rampant anxiety about class is being reconfigured by Duncan: the mere democratic “know-all” unequal to the “fountain” (“sources” versus source), one detects the sneer in “self-improvement,” the snide diminuendo in “mentor.” (Sounds that become routine in the self-serving exordia—a word that means “snotty remark”—of the “post-avant” crowd against any “merely” populist draw.)


Duncan so decidedly for “origins” (against “originalities”)—recall how Thom Gunn, in “Adventurous Song: Robert Duncan as Romantic Modernist,” puts it up front: “Robert Duncan was proud to call himself a derivative poet.” Duncan deploring the ga-ga temptation—

To tie fancy knots and to contrive a greater show of our abilities. But all these original knottings are mistaken, are ‘hey-ding-ding’—‘lead nowhere’ the common sense is—if they are all novelty, things of 1920, not lasting forces. The knots that are flames are not originalities, but origins.
“I think you have the ‘spark’,” H.D. writes in her letter to Williams, “and when you speak direct are a poet.” The spark lies in, is, the word wherever it is spoken direct, directs what we are then, for we involve ourselves in what is said. Direct.

And pulls style itself out of the “the work of the other, the poet":

The interesting effects, the devices that give personality, are part of it; but they are not the work of the other, the poet, whose urgency it is to speak regardless of this person. In poetry we strive to make things real by working with every word as coming direct from an inner voice, as the immediate condition of or presence of the poem itself.
For the knots of the net are actual suns; are in poetry, as in dreams, directives in the imagination between actual events and man’s self, are terms of the real, are when-wheres that co-existing in the word and in the world make actual events real.

The poet writes the poem in spite of the constrictings and / or gussyings-up of the damnably arrogant (or merely meddlesome) self. Dodging the stultifying moi and its primal “knows-best-ism”—that’s the task of the poet. Purely Romantic. (See Duncan’s note in Fictive Certainties wherein he talks of how “the intellectual adventure of not knowing” returns “with the Romantic movement.” Rimbaud’s “long, immense et raisonné dérèglement de tous les sens” becomes nothing but one’s necessary means of sidelining the beseechings of the self and getting to the “direct.”

“Invention presupposed imagination,” Stravinsky says in his Poetics of Music, “but should not be confused with it. For the act of invention implies the necessity of a lucky find and of achieving full realization of this find. What we imagine does not necessarily take on a concrete form and may remain in a state of virtuality, whereas invention is not conceivable apart from its actual being worked out. Thus, what concerns us here is not imagination in itself, but rather creative imagination: the faculty that helps us to pass from the level of conception to the level of realization.”
I must have come across the definition before, that poetry, from the verb poiein, meant to make, but it was in Stravinsky’s book that the statement got across, and that poetics is “the study of work to be done.” To make things happen. And my idea of melody I found most clearly expressed there too in 1948, that “Melody, Mélôdia in Greek, is the intonation of the melos, which signifies a fragment, a part of a phrase” . . .

How succinctly that jibes with a note out of Friedrich Schlegel’s 1797 “Critical Fragments”: “There is so much poetry and yet there is nothing more rare than a poem! This is due to the vast quantity of poetical sketches, studies, fragments,
tendencies, ruins, and raw materials.” Bankruptcy of imagination without invention. (Somewhere there’s Blake, too, saying: “Nor can an Original Invention Exist without Execution Organized & minutely Delineated & Articulated Either by God or Man. I do not mean smoothd up & Niggled . . .”) 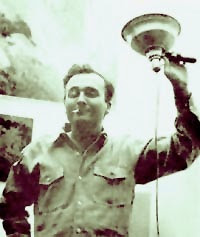