Stonecutter: A Journal of Art and Literature, No. 1 (Spring / Summer 2011), edited by Katie Raissian, with Ava Lehrer, Anna Della Subin, and Zara Katz

A new journal, defiantly “of the world,” avoiding the usual parochialism of these shores. Impeccably present’d: cover with found cuts of celestial events (“Jets near Sun’s Limb, Oct. 5, 1871” one reads). Editor Katie Raissian offers a tale of a “traveler on a road in 8th century China” who finds a poem “carved into a stone”: “A millennia of voices and experience flooded to him.” She writes: “Stonecutter, become a mountain. Do not try to become the sun.” And: “Look out to the stars. Look to the stone for language. Birthstone, bloodstone, copestone, inkstone, thunderstone . . .”

XI
Linnaeus coins Cryptogamia:
plants that conceal their
reproductive parts. These are
the softest, moistest classes:
mosses, algae, fungi, ferns.
They are the ones he most
likes to touch. Wet blankets
and deeply known surfaces.

XII
Linnaeus thinks he will draw a
goat in pencil.

He draws the nose first, then
one horn, the foot, rum;

It looks nice taped to the
window with its organs not
showing, not shining through.

XXI
Handwriting becomes smaller
as the purpose of work
becomes less clear. Linnaeus
signals that which he doesn’t
know with “. . .” and wishes
that his . . . wasn’t so bountiful.

XXIV
Two stamens cross each other
at a point which is called . . .

. . . is drastically different from
the vanilla bean shell,
particularly in areas where . . .
a. faint line b. small joints
c. is called open capsule.

Eliot Weinberger (“Islands in the Sea”), a story—beginning “in Ireland in the 8th century”—of one Mael Duin, son of “a man of war named Ailill of the Edge of Battle,” setting out in a “three-skin boat” attempting to avenge father’s death (trapped and burn’d “in the church of Dubcluain”):

Three days and nights they drifted, and then heard the sound of waves breaking on a shore. As they were about to land, a swarm of ants, each the size of a colt, came down the beach toward them, and swam out after them as the men furiously rowed away.

They rowed and came to an island that was all terraced, with trees growing on every level, and countless birds in the trees. No one was there. They caught, and cooked, and ravenously ate the birds.

They came to a large and flat island, and found an enormous mowed lawn with the hoof-prints of horses on it. Each hoof-print was the length of a ship’s mast. Scattered on the green were the shells of huge nuts and piles of plunder. The men fled, and when they were out to sea again, the heard the sound of a horse race and the roar of a vast crowd cheering.

They came to an island that seemed delightful, with many animals like horses. But the animals were tearing pieces out of each other’s sides with their teeth, and carrying off the skin and flesh. Blood streamed from their sides; the ground was covered with it. The men fled hastily and grew sad, wondering where they were going in the world.

(Secret, secretus, separate, hidden, rare, a work learned by heart that one will never recite?)

Me—they say ‘world’ comes from the Latin ‘mundus,’ a box, a hut; thus each of us hides an adornment, an ornament, and the world is simply the reflection of what we dare to give.

(World: we find the Etruscan goddess Munthukh, whose role was to gild and adorn, represented in mirrors—the goddess frames the mirror and I do not look at myself to remember myself. I look at myself to understand what I have to give because the image of the self does not protect from the weaknesses of the world.)

She—“we always imagine the heart shaped like a round spot in the middle of the body. But how deep is a spot?

An ocellus is a round spot on the plumage of a bird, on a mammal’s fur. Ocellus, little eye—the soul digs a desire into the body and then covers it over with its own skin.”

(The world is sad because there are not enough secrets; most people give only what is asked of them.)

Jocelyn Spaar (“In a Trance of Stealth: The Troubled and Translated Lives of Alix Roubaud”):

The project of reading Alix’s Journal might very well require its reader (or voyeur) never to leave one’s bedsheets, instead building for oneself a referential fortress, an Oulipian structure of almost every famous person’s diary, flanked by teetering book-towers of aesthetic theory, architecture, ordinary language philosophy, logical positivism, autobiography and self-portraiture. This fortress ought to be encircled in a diaphanous shroud of gauzy, wine-stained curtains, with a rich brocade of sleeping pills, mirror shards, billet-doux, and a million tissues stitched into the transparent toile. So interior and subjective is the experience of reading the collage-like diaries, which take place primarily inside of Alix’s room and head, that one scarcely believes that exterior worlds could exist, except in fleeting glimpses.

the metaphysic
of commodity exchange: to never know
with whom we’re connected

But as soon as it emerges as a commodity,
it changes into a thing which transcends sensuousness.
It not only stands with its feet on the ground, but,
in relation to all other commodities, it stands on its head,
and evolves out of its wooden brain grotesque ideas
far more wonderful than if it began dancing of its own
free will

After the rain, we went out in pairs
to hunt the caps that budded at night:
wet handfuls of waxtips and widows,
a double-ringed yellow, two lawyer’s wigs.

We shook them out onto gridded sheets,
the girls more careful than the boys,
penciled notes on their size and shape
then levelled a wood-press over their heads.

Overnight, they dropped scatter patterns
in dot-and-dash, spindles and asterisks
that stained the page with smoky rings,
blush and blot, coal dust blooms.

In the slow black snow of spores
I saw a woodcut winter cart and horse
careen off course, a dull explosion
of iron and ash, the wheels unravelling.

All day, a smell of loam hung overhead.
We bent like true clairvoyants at our desks
trying to divine whatever message was left
in all those little deaths, the dark, childless stars. 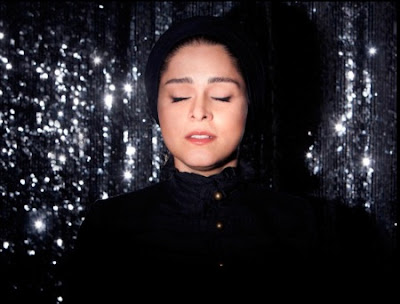 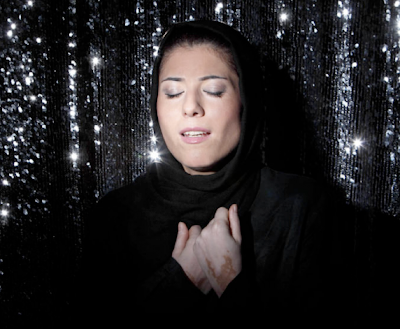 Two of Newsha Tavakolian’s photographs of Iranian women, out of a series call’d “Listen.” (In photographer Abbas Kowsari’s words—in Stonecutter #1—“Eyes closed, mouths open, as if in a dream. Standing facing us with their backs to the darkness, they sing, soundless. They have been standing here, singing for themselves for a long time, imagining us, hearing. Standing, facing days of tedium, facing a world that has adorned them with a false crown.”)

Thus personal worth is bid ‘up’ by one’s own rank robotic thing-amassment, and thing-stinginess drowns each heavenly piety and earthly idyll of man’s slumbering unsunder’d with lazy dogs and clover-sweet cows and impetuous roosters, submerges it ‘in the icy water of egotistical calculation,’ its callous nexus of cash and dash. Dash, meaning ‘To knock, hurl, or thrust violently,’ ‘to break by striking,’ ‘a sudden onset, rush, or attempt’ and ‘conspicuous display.’ So, an enlisted Kyrgyz in a guard tower in Guantánamo, thunder booming down out of the hills. So, the inverted anvil shape of an enormous black cloud scooting its way across the prairies, bending the grass to unloose a skew’d squad of fireflies, the color of phosphorous, green, ascendant. So, in Frankfurt am Main, the Poelzig-Bau, former Konzernzentrale of the chemical giant IG Farben, manufacturer of the pesticide Zyklon B (used in the gas chambers), now houses the untidy offices of professors of theology and philosophy.