Beginning to ascertain what the euphemism-fraught memoranda must say, with caddish witticisms abounding, ‘critical indifference factoids’ and ‘faux mannerist amiability’ big amongst them. I doubt you even register’d my lack of singularity, how I squander’d my one monumental heart two dim sum joints back, or three. Like the twelfth c. monk Siagyō says: ‘where the trail crosses the cliffs, I look only at the scaffolding’s planks, and shun the onlookers.’ The Chinese master of the present blessedness Wallace Stevens put it thus: ‘The Good Man Has No Shape.’ A Baltimore oriole up in a maple disgorges a burr of noise. A series of cascading ineluctables ends with select’d dahlias annul’d by the heat. I think of Blake grabbing a long-handled shovel to join the mob at Newgate Prison. As if they knew.

Ramón Doll, in Policía Intelectual (1933), attacking Borges’s 1932 Discusión and accusing Borges of being a “literary parasite” (quoted in Enrique Vila-Matas’s Montano’s Malady): “These essays, bibliographical in their intention or content, belong to that genre of parasitic literature that involves repeating badly things others have said well; or in pretending Don Quixote and Martín Fierro were never published, and printing entire pages lifted from these works; or in making out that one is interested in elucidating some point and with a candid air incorporating the opinions of others, to be seen not to be one-sided, but to have respect for all ideas (and in that way the essay gets written).” Vila-Matas is, in turn, quoting Alan Pauls’s El factor Borges (2000):

Pauls remarks that Borges, contrary to the policeman Doll’s expectations, very probably did not disapprove of the critic’s words, but quite the opposite: “With the shrewdness and sense of economy of great misfits, who recycle the enemy’s blows to strengthen their own, Borges does not reject Doll’s condemnation, rather he converts it—reverts it—into his own artistic program. Borges’ work is teeming with such secondary, slightly obscure characters, who like shadows follow the trail of a more luminous work or character. Translators, exegetes, annotators of sacred texts, interpreters, librarians, even lackeys of beautiful people and brawlers: Borges defines the true ethic of subordination in this gallery of anonymous creatures . . .”

Sense of impending hiatus indéfini . . . (Rehandling that totemic line here in my worn scrubs, Nick’s to Marjorie in Hemingway’s “The End of Something”: “It isn’t fun any more. Not any of it.”) 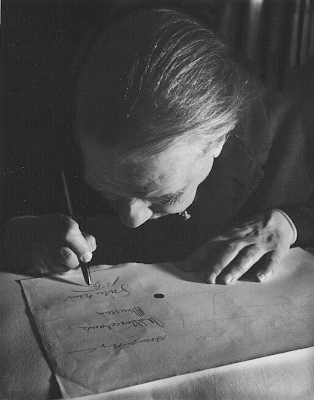