XXVI
What affinity with the bright
square yard surround’d by fencing,
its circular scrawls of razor-
wire entangling the border between
light and night? It is
piled up with tires, or
junk’d cars and a stocky
Mexican man is hammering up
under the cantilever’d door of
the garage. The place is
cordon’d off by two expressway
ramps and several ailanthus trees
shoot up out of apparent
rubbish along one embankment, the
only half-green in evidence.
Involuntary stimuli in its disequilibrium.

Eight below zero and the crows clumping meanly up, too cold for the usual dispersal out into the hinterlands. Listlessness of a weekend, “feeling stems out of awkward necessity,” and / or trying to finish “off” William Gaddis’s J R vacillant between its own dyspepticks of vigor. “Invention was eliminating the very possibility of failure as a condition for success precisely in the God damned arts”—that’s what mechanical toys do—like the player piano that keeps playing its loony parsimonious niceties long after the piano player’s slump’d to the beer-slosh’d floor, nape-pierced with a small-caliber hole. To fail precisely on one’s own two-hand’d terms, all “got up” in one’s own frippery, not part of some job lot of “invention” (or some groupuscule)—that’s the way. Gaddis’s epigone dilemma (twenty years between books):

—Ten years late staggers out God damned pianist already shot God damned sunshine everybody step right over him God damned hurry go noplace nobody give a God damn book everything’s happened book about everybody knows hate it!
—Man like that’s what people want’s books that tell them what they already know, I mean that’s why they’re all such bullshit . . .

Which may explain the popularity of the poo-poo crowd, the recycling of minable materia minima: “Your Argument is so sillie, as that not some exquisite Sophister, but any punie Sophumer may at first sight discover the feebleness of it.” It’s one (but beautiful) thing to find oneself in terror and awe at the source of one’s “material,” at the unabideable ways it burns “forth”—“neon in daylight”; it’s another (lazy, failure-eliminating—and that’s not a ca-ca-joke!) to root standoffishly around (with a stick, with Google) in world-garbage (like a “punie Sophumer,” like a dead piano player, or a player piano) to drag out for one’s inspect what everybody know’d they’d find. More dumbisms. Think of Thelonious Monk who “played the piano as though he’d never seen one before”:

Came at it from all angles, using his elbows, taking chops at it, rippling through the keys like they were a deck of cards, fingers jabbing at them like they were hot to the touch or tottering around them like a woman in heels—playing it all wrong . . .
He played each note as though astonished by the previous one, as though every touch of his fingers on the keyboard was correcting an error and this touch in turn became an error to be corrected and so the tune never quite ended up the way it was meant to. Sometimes the song seemed to have turned inside out or to have been constructed entirely from mistakes . . . he was always wrong-fingering himself. . . . Listening to him was like watching someone fidget, you felt uncomfortable until you started doing it too.

(Geoff Dyer, in But Beautiful: A Book about Jazz) Think, though, of some mechanical Monk, or a man mechanically train’d to fidget. Or record a fidget. I see—I could bewail in a long pitoyable dog-howl my lack of a home “connect”—that I miss’d a slew (or a sluice) of Flarf feistiness (well, what passes itself off as such, riddled with Anonymous gibberish the level of a reasonably intelligent hellbender). What I see, mostly, within such self-diadem’d (and self-proclaim’d “hilarious”) groupuscular démarche, is a serious failure to engage. Flarfists and Language boys, même chose. (In something over fifty pieces of writing about The Grand Piano, one writer—Tom Mandel—had anything to reply, and that, privately.) (Flarf, of course, positions itself flatulently beyond the shit-pail of the dirty’d circle of human discourse—what’s to engage when there’s another idiocy about squid to let fly? Which is reason enough, for me, to let the bumptious cowards go off pummeling one another and heaving out choked hilarities, staggeringly narcissistic, off into the gloaming . . .) (I did, though, recall seeing a Greek boy haul in a squid and proceed to scrub it around against the pier—“to get the ink out.” Left it looking something like a four-day old sock. I could do that.) 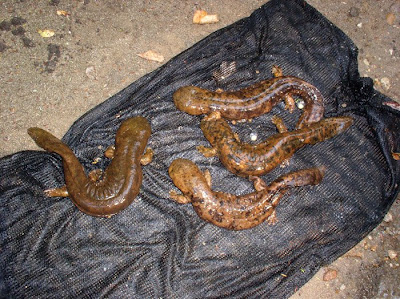