XXIX
Impasse at the washout, the
brusque manœuvres in the jeep.

Books piling up and no
end to the snails I

lift out of the window-
box with the penknife’s blade.

Categorical innocence of autumn: trees
stripping down, the geranium bolt’d.

The third issue of The Sienese Shredder, an impeccable and gorgeous sumptuary of a magazine (of, according to cover copy, “art, design, literature, poetry, music, culture”) arrived. Edited by Brice Brown and Trevor Winkfield, it is proving adept at disgorging minor incroyables—items one unabashedly gasps at—with alarming regularity. One is only troubled by the exorbitance of its riches—how work one’s way through it all, nearly sated by examination of a single page, say, that photograph entitled “Yippee” by Tim Davis—the word itself labelmaker’d and attach’d to a (shower?) wall of vaguely gingko-shaped leaves, nail-holed, mildew’d, worn—one of eight Davis C-prints reproduced. (Considering the contracting economy and the poor niggardly poet half of me—exacerbated by my stingy Scottish forebears—I do do a little flummox-frownery attempting to comprehend how the “item,” nigh three hundred pages in a largish format, design’d at The Grenfell Press and print’d in Verona, Italy at Trifolio, with innumerable color plates and a pocket’d CD of music by Eric Moe, sells at $30—totally happy though I be, I mean, dang, that scrubby Grand Piano booklet cost’d me, what, better’n a third of that?)

Some select’d notes (what strikes a fancy). There’s a notable two dozen epigraphs collect’d by English oddball William Beckford (author of Vathek),“found in the cemetery of a considerable town on the high road from London to Bristol . . . probably the production of the same goose-quill; but whether wielded by the sexton, clerk, or even parson of the Parish, I could not learn . . . apparently enough before the dawn of our present most wonderful poetical Æra” (so Beckford report’d in Bath, in 1822). Here’s one:

I went and listed in the Tenth Hussars,
And gallopped with them to the bloody wars—
“Die for your sovereign,—for your country die!”
To earn such glory feeling rather shy,
Snug I slipped home; but Death soon sent me off,
After a struggle with the Hooping cough.

There’s a 1946 watercolor and ink by Denton Welch (the Maiden Voyage and In Youth Is Pleasure author). Call’d The Coffin House (and accompany’d by a photograph of the original, rather half hexagonal-looking structure in Kent), the painting unmistakably recalls the work of Samuel Palmer, that “lit within” visionary fastidiousness, replete with a natural world (a large hare nibbles away at a red-capped toadstool in the foreground) that is more robust than anything human (two figures appear to crouch under an umbrella behind an overgrown stone wall in the middle distance). Astounding to learn Welch paint’d.

There’s a clutch of poems by Michael Gizzi that recall somehow little collections of Glen Baxter captions, with lines like “The father in exile stripped of his sundial borrows the equator for a belt,” and “One branch of the family is antiseptic, another a lecture on prickers.” Here’s one call’d “Translation”:

A shadow sneezes on the stridulating ghosts of grasshoppers.

With a wave of a wand, the oaks rush to shadow the son of an old librarian and six white cantos in pants.

It’s good to spruce up your journey with a comma, a toenail from infancy.

No pedigree but riffraff endowed with pure Cistercian flesh.

A pale eye the color of a few words.

A kind of surrealism with loud materialist alarums pinned to the words—the precise efficiency of “Deer parse privet,” the way it makes one mouth to parse.

There’s a grip of artworks by Elsa Von Freytag-Loringhoven, the Baroness, work’d to the extreme and (mostly) worded. One is a “gouache on foil” (1923-24) of a furl’d umbrella leaning against what could be an overflowing wash basin, with a large shoe’d foot and bright-color’d trouser leg stepping emphatically out of the tableau left. Indistinguishable objects cover the floor in the foreground—books, pocketbooks? Blockprint’d (in violet): “FORGOTTEN—LIKE THIS PARAPLUIE / AM I BY YOU / FAITHLESS / BERNICE,” though parapluie looks as if it’s spell’d parapluice. Another page appears to be a draft of two poems, with doodles. One piece, “Equinox,” begins:

Evidence of the period disease of Joycean double-epithets, though I am fond of “slatekites,” presumably roofing tiles.

There’s a fine interview by (mostly) Mark Polizzotti with “novelist, composer, musicologist” Maurice Roche, author of “eight of the most challenging novels ever written”—Polizzotti himself translated Compact (Dalkey Archive, 1988)—who, too, mentions Joyce (Roche is responding to a suggestion that Roche’s own play with language in French inevitably recalls Rabelais):

Joyce was nothing if not a huge fan of Rabelais. Of course the translation comes across like Rabelais! But it comes across as flat Rabelais. No, listen, there’s the story, if you want to talk about foreign languages in a novel, when Pantagruel meets Panurge “whom he loved his whole life long,” etc., etc. He begins by asking him a question, and the other answers in—he goes through everything, made-up languages, Hebrew, Danish, Pig Latin, until they finally get to, “Ah! You speak French too! But that’s marvelous, why didn’t you say so…!” The point is that the use of foreign languages in literature is a commonplace. And when you talk about Joyce, of course Joyce was inspired by all that, by Rabelais’s invented languages, the words he made up from bits of Greek, student lingo, medical terms . . .

Miles Champion offers a portfolio of nine poets, including the mysterious (some say “neglected”) Iliassa Sequin:

Two Variations of Poem I

alas ‘clickity clack’ art’s infinitude
how does it do it

oh dear, a reality of illusions
a bum steer
it is dogged as does it

as a rose being forged
she bled

2
alas, clickity clack art’s spite
how does it do it

oh dear, an overawed rebellion
a counter-claim
thrown to the dogs

assumably
beneath a glaring error
what a sucker

Which sizzles like a sparkler, sending out off lights. Each act of “making strange” seeming to echo / provide under-song to a familiar (“it is dogged as does it” singing through “easy does it,” “dog eat dog,” “nobody dog me around”—a plethora of “humours” spouting up.) Too, Champion offers several of Tim Atkins’s terrific re-workings of Petrarch’s canzoniere. Here’s Atkins’s “Petrarch 199” (“O bella man che mi distringi ’l core,” the one Sir Thomas Wyatt’s “O goodely Hand” itself reworks):

(Medieval music. It is dusk. In the woods above Avignon, Petrarch and his brother are walking. In the middle of the path, they come upon an enormous glove.)

BROTHER:       Look at those pearls: they appear to be of oriental hue.

(He tries to lift it) It is as heavy as a great ball!

PETRARCH:     Hush! (He appears to be listening) Dear glove that covers polished ivory and fresh roses:

Who on earth ever saw such a thing?

PETRARCH:     And yet . . . I recall the necessity of her astonishing fingers.

Every night they squeezed my heart tight.

(He sighs) It is late and we are cold. (Yawning) Let us sleep in this.

PETRARCH:     Would that I had as much of her as the thought of her—now—naked fingers.

PETRARCH:     (He weeps) But this is theft, and must be taken back.

Quenching. (Typing away, and with one eye peel’d off to the Wyatt, I am thinking how satisfying such reworkings be, put up against the (mostly) lamentable results of “homophonic translation.”)

If there’s a “gist and pith” to the overall editing approach in The Sienese Shredder, I’d say it’s a tendency toward the unabash’d jack-of-all-trades “cross-disciplinary” sort of thing that says, why not print Larry Rivers’s poems (or Denton Welch’s paintings)? So Melissa Meyer, with several primary-color’d watercolors (all titled Muse Cubi, Bogliasco, 2005), offers, too, a page of quotes. (I prefer: Joan Mitchell’s “I carry my landscapes around with me” and Nicholas Ray’s “Sometimes telling the truth is very dull.”) 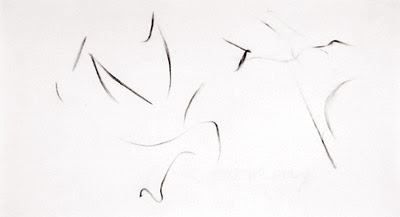