Tom Mandel’s latest squib (in The Grand Piano 7) rustles dry and wintry with a (mostly) endearing melancholy. Seemingly a more “relax’d” jaunt compared with some of the earlier outings. One isn’t put off by the buzz of import, dynamo hum of “ain’t I something” here. Mandel captures the odd disconcerting fever-spell of the earliest years of AIDS (and its casualties) in a sweet recalling of filmmaker Warren Sonbert and partner, Ray Larsen: “I found my friend Ray Larsen somewhat hobbled, having, he said, injured his leg. By September, unaccountably, he was dead.” (Fitting precisely with a kid I knew in Ithaca, New York, a man who made a minor splash designing clothes—I think I probably had exactly one direct conversation with him: at a dinner he remark’d how he’d never seen anybody smoke so many cigarettes so quickly. Encounter’d on a street looking entirely, gut-churningly skinny. A month later, unaccountably . . .) The difference: Mandel’s recalling 1992. I think of the fleet incoherencies of the disease occurring earlier and am a little shock’d by the apparent silences / dissembling of Sonbert and Larsen. It’s no matter: Mandel’s writing into the strains (musical or not) of mortality is moving.

Out of that (a set piece) Mandel moves to consider music (largely radio, growing up) in a kind of clumsy opposition to “music” (defining it, “ideas, pictures of and out of the past, memories, names and the people they named, stories, and more.”) So that: in a short sprint of memories—Uptown Chicago, late ’forties—what comes through is predominantly visual (“mother in profile, pregnant, wearing a dark dress with small white polka dots”). And oddly iconic—as if a sense of mortality, once instill’d, sweeps off the brash different-insistences of youth. Mandel says of a furniture-sized radio: “Such a device must be an iconic memory for many of my generation, both for what it was and for the way over the years that it shrank, assumed arbitrary forms, then vanished into other devices . . .” And, more alarmingly, if one’s accustom’d to thinking of Language writers as (somehow, or, self-proclaim’d) iconoclasts, Mandel reports (of a somewhat jaunty mortal goodbye, a “nice knowing you” en route to the hospital):

That’s normal in a good sense, not Ozzie and Harriet, not I Love Lucy, but the films of Howard Hawks, where there is a norm to aspire to in action—nothing objectified, not even named but rather referred to in passing while being made (made true) in process, natura naturans, like an L-system which from the iteration of simple rules allows something complex to emerge, in Hawks’s comedies an iteration of confusion, misapprehension, costume, all leading to love, in the more serious films to death, with love along the way.

And Mandel adds, “all that is made, natura naturata, must die so that if you enlarge the frame of the comedies, they too lead to death.” No doubt. Enlarge any human frame and what’s there is death, inevitably. (Lindenmayer systems, busy generating self-similar fractals, wouldn’t seem the most obvious vehicle to attach that idea to, though it may just do it by sprouting up an “iteration of confusion” in some minds.) The curio here is how simple Mandel’s “norm” finally is: “love” and (follow’d by) “death,” the old human, too human standbys.

Toward the end, Mandel kudos up a book about John Donne by one Arthur Marotti, one “unmasking a completely different poet from the one whose name was made by the New Criticism.” Mandel’s seemingly startled recognition that “the work itself . . . can have no stable character”—“The work takes its existence from the ‘prospectives’ . . . and processes of its writing, and because each experience of the work redeploys them, there can be no stable nature to which the general terms ‘literature’ and ‘writing’ seem to refer”—well, certainement. Mais quoi d’autre encore? Isn’t that a rather minimal (read, obvious) thing? Every new reader remaking a piece, and every new reading (by a single reader) remaking it, and every new groupuscule (kowtowing or defiant) remaking it (or unmaking it) . . . 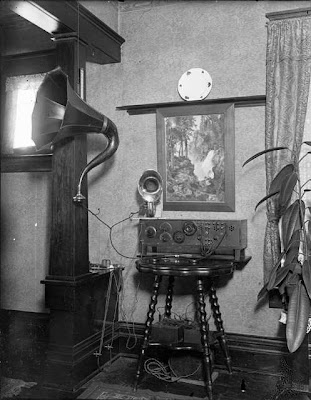 Radio Icon
(Five mornings a week, from 1932 to 1942, Allen Prescott, host of the program Wife Saver, greeted his faithful audience of housewives with a cheery, “Hello, girls.” Prescott, who sometimes received as many as five hundred letters a week from women all over the country, solved some of life’s more mundane problems by offering such homey advice and household tips as how to get meat out of the can, where to store hats, and how to make new silk stockings last longer. Prescott’s signature sign-off, “Mrs. Housewife, I hope there’s nothing burning,” typifies his droll delivery.)

XXVII
The stall’d moment prior
to the musical cut,
the bow tensing its
horse-hairs to barely
and rather prepossessedly singe
the bent arc of
the saw, is incongruous,
undeignedly conveyant, intemperate, full
(oh yeah) of all
that art intends without
becoming it. Or all
it portends. That moment
spurns all that that
is uncountable, all that
that arrives somewhere unaccountably
unperceived, all that that
draws up a contract
without end, a mainstay
against the unending harness’d
turbulence of its quiver,
its noise tat-tatting
like a drill. Art’s
lawless cutpurse precedents—I
keep trying to withhold
something, fit the equi-
poise of indifference to
the unleash’d stride of
grubbing desire, snatch a
mitt of coinage, put
doubloons in a sock,
gain mastery out of
mystery, and how completely
I am scathed by
my unsheathing, incapable of
exercising restraint at that
unabating bid for some-
thing indicative to start.