75
The clock “strains at” six and a tawdry yellow
Light stains the trees. Black crow-shaped cutouts unfold
And gust aimlessly toward town, impertinent
And straggly refuse.

Now one is inclined to herd the evening
Home, Hesperus with a bramble switch, a dog,
And a comfortable fib, working the edge
Against dispersal.

1 Girl: Like the highest honey-color’d quince way up
In the tree, hard-bit by frost, it’s out of reach:
No long quince-thief’s pole jabbing “at” it’s going
To knock it down, nope.

2 Girl: Think of a hyacinthine blush, merest trace
Of rose-madder in the mountains, bruise and smudge
Of tiniest slip and petal where the ploughboys
And shepherds trudged: yup.

Who’s that white-trash Republican all deck’d out
In high water pants and suspenders I see
You rubbing up against? What a hick! Artless!
How’s he get it up?

End of day throws an enormous tarpaulin,
Shiny and black, atop what it salvages,
Straps it down against any consummate breeze
With one thousand ropes.

Autumnal trafficking in Sapphics (thank you, August Kleinzahler). The second stanza a reworking of Sappho’s fragment 16. The third and fourth of 34, what Mary Barnard calls “Lament for a maidenhead.” Fifth stanza a happy butchering of 74. Final two up out of my own misprisionings.

In a fine outburst one Basil Valentine, late in The Recognitions, after a general thrashing and pooh-poohing of any notion of the exceptionalism of the past (“Vulgarity, cupidity, and power. . . . Is that all you see around you, and you think it was different then? Flanders in the fifteenth century, do you think it was all like the Adoration of the Mystic Lamb? What about the paintings we’ve never seen? the trash that’s disappeared? Just because we have a few masterpieces left, do you think they were all masterpieces? What about the pictures we’ve never seen, and never will see? that were as bad as anything that’s ever been done . . .”)—concluding that “vulgar ostentation”’ll “stifle beauty everywhere . . . the way it’s doing today,” whoring away genius, glorifying the rich, wasting one’s talents, at the mercy of those one holds in contempt. Next: a grim refutation of the “God-tetch’d” lines I quoted some weeks back about how the immaculate detail in each painting “reflects . . . God’s concern with the most insignificant objects in life, with everything,” what Valentine calls an “insane upside-down apology for these pictures, every figure and every object with its own presence, its own consciousness because it was being looked at by God!”

Do you know what it was? What it really was? that everything was so afraid, so uncertain God saw it, that it insisted on its vanity in His eyes? Fear, fear, pessimism and fear and depression everywhere, the way it is today, that’s why your pictures are so cluttered with detail, this terror of emptiness, this absolute terror of space. Because maybe God isn’t watching. Maybe he doesn’t see. . . . Separation . . . all of it cluttered with separation, everything in its own vain shell, everything separate, withdrawn from everything else. Being looked at by God! Is there separation in God?

I like that “upside-down apology”—how it predicts some of David Hockney’s arguments, in Secret Knowledge: Rediscovering the Lost Techniques of the Old Masters, that optically-assisted painting, using combinations of the camera obscura, the camera lucida, and mirrors (a concave mirror’s got the optical quality of a lens and is capable of projecting an image—upside down—onto a flat surface) begins in the early fifteenth century in “the Low Countries.” Hence the era’s “rich & strange” sea-change in verisimilitude.

And us? today? pissing away one’s abilities? filling the monstrous reaches of (cyber)-space with verbal drivel and ostentation, so uncertain that God (or anybody) sees us? Well, yeah, there’s some of that around. Difference between the continuum of night and the separate (distinct) anxieties (objects) of day. One dwells in the interstice call’d the real, tossing Zeno of Elea out on ’s ear—though, certes he’d never actually land because, as Aristotle puts the paradox: There is no motion because that which is moved must arrive at the middle of its course before it arrives at the end. That’s the kind of thing makes me enormously tired. We do what we do, we attend and keep eyes wide. A fine Gaddis-delineated dawn:

In the daylight’s embrace, objects reared to assert their separate identities, as the rising sun rescued villages from the throbbing harmony of night, and laid the world out where they could get their hands on it to assail it once more on reasonable terms. Shapes recovered proper distance from one another, becoming distinct in color and extension, withdrawn and self-sufficient, each an entity because it was not, and with daylight could not be confused with, or be a part of, anything else. Eyes were opened, things looked at, and, in short, propriety was restored. 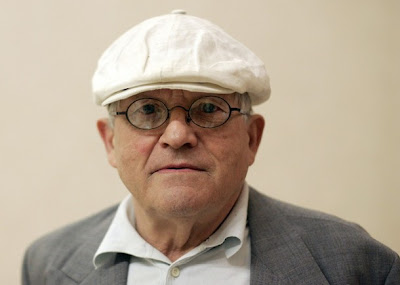