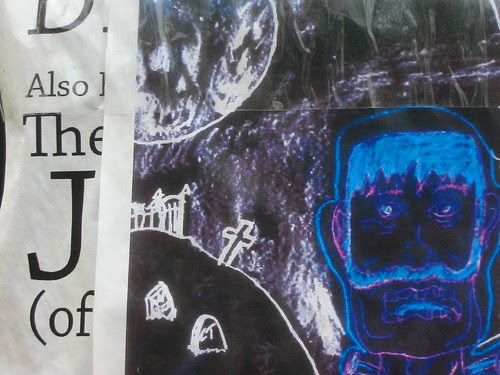 A Wall (J and Cross)

81
The last of summer is
The light deter’d by no
Untoward inadmissible prospect, a ratiocinatory
Causeway uninterrupt’d, pure jarring endlessness—
Like a kite going up
And up into a zone
Undetermined but by the tug
Of a string tied to
A finger, a way of
Recalling it. One is full of
Doubts about the feasibility of
Such tactile conventions, connecting with
Anybody is so fraught with
Hazards and disappointments in these
Gloaming late-empire days and
Besides, there is now empirical
Proof: the mail system sucks.
Delight isn’t talk’d about much
Any longer—it wars with
The deadpan irony that’s become
The physiognomickal default setting, duh.
And besides, it sounds hokey.
“Delight’d was I / with my
Ample pie.” Sounds like a
Lobbyist. Or something one’d spout
Up in the celestial mall
To an anarcho-syndicalist electrical
Co-worker, a union bloke,
The both of you trying
To hang a nativity scene
Up “amongst” the stars, a
Poor earth-temper’d retrospect on
Some helluva thing. Audacious, it
Is, a complete knockout, though
Nameless and unreveal’d be the
Artists who walk under it.

Re-directing some words and phrases of Emily Dickinson’s:

To meet it—nameless as it is—
Without celestial Mail—
Audacious as without a knock
To walk within the Vail.

Even with previously knowing the dim outline of Jack Spicer’s “stance” regarding the “circulation” of poetry in the world—the strictly San Francisco-area J magazine and all that—I am wholly “took” by the line quoted here (out of a letter to Robert Duncan, and regarding, apparently, a late détente in Spicer’s ornery refusal to allow any willy-nilly poetic dispersal—like letting Lawrence Ferlinghetti sell Spicer books at City Lights): “I still think I was right and poets don’t really need a middleman and a middleman fucks up poetry.” The line recalls Frank O’Hara’s cheekier—though arguably equally serious, O’Hara’s nonchalance about publishing (he stall’d Ferlinghetti’s call for Lunch Poems with a sly “Still cooking”) is attest’d un peu partout—lines in “Personism” about using the telephone instead of writing: “It puts the poem squarely between the poet and the person, Lucky Pierre style, and the poem is correspondingly gratified. The poem is at last between two persons instead of two pages.” Making of the poem a thing ephemeral, direct, uncontaminated by commerce. See, too, the Rimbaud of the late-writ “Solde” (“For Sale”) for the vehemence of the disgust point’d directly to the fact that there exist precisely zero “things that will never be sold”—including, bien sûr, poetry:

For sale: anarchy for the masses; irrepressible satisfaction for superior amateurs; atrocious deaths for disciples and lovers!

For sale: habitations and migrations, sports, spectaculars and perfect comforts, and the noise, the movement and the future they make!

For sale: bodies, voices, the immense unquestionable opulence, things that will never be sold . . .

Which sent me off to re-read Spicer’s “A Fake Novel about the Life of Arthur Rimbaud,” looking for what exactly? Frankly, the thing is a mess—vacillating between crabbed surrealistic flourishes that bump against the ground, too-ballast’d (“Apollinaire used to play golf while other people were shooting machine guns. Big butterflies tried to liberate him from the liberal mineded. But Rimbaud crawled to the page that lifted him up from his nephews.”) and obscure homiletics (“‘Surrealism is a coat of many colors,’ Rimbaud is supposed to have remarked long after everything was over. To love is not to continue with the Zanzibar slave trade. To continue with the Zanzibar slave trade is not to love. It is similar.”) (The alcoholic in Spicer is both obsessively reiterative (“the tiresome drunk”) and always going off somewhere else, hard to “follow” (“the ‘incoherent’ drunk”). Try tracing the local meanings of “the Dead Letter Office” through Spicer’s novel of Rimbaud—of course it’s full of inconsistencies. (As Spicer says in Chapter I of Book III, “An Ontological Proof Of The Existence Of Rimbaud”: “This is called Occam’s Law or Davy Jones’ Locker. // If they call him up into being by their logic he does not exist.” Which is not unlike Escoffier’s maxim “Faites simple”—“Keep it simple,” ratiocinatory mayhem (“Reason”)’s got no truck in matters of faith.) That’s Spicer the “blind” drunk. (Akin to, of course, O’Hara’s “You just go on your nerve.” And to Rimbaud’s “un long, immense et raisonné dérèglement de tous les sens,” inexplicitly, and with a pull’d punch—that “raisonné”—a call for “faith.”) On some level though, the Dead Letter Office is simply a “blank check,” useless as currency (though, too, of huge use in an economy of faith, where fraudulence rests within), tabula rasa to a ghostly legion (a “host”) of poets. Spicer’s Chapter II of Book III, titled “The Dead Letter Office”:

Sentiment is not to the point. A dead letter is there because it has no longer real addresses.

If President Buchanan sent a letter to Cordell Hull (also dead) it would remain there. No thanks to the spirit of things. A dead letter is exactly as if someone received it.

What Rimbaud knew or someone else knew is no incidental. Sentiment is not to the point. These dead poets knew what was coming to them.

There was a blank book where the ghosts or the ages of them kept listening. Or what the others said. As in the gold in an earring.

Or what the others said. President Buchanan pledged his truth when he died.

James Buchanan, 1791-1868; Cordell Hull, 1871-1955. And somewhere in the dingy corridors of the brainbox, I recall Bill Bathurst’s heart-breaking “How to Continue” that I put down here at Hotel Point, that big red structure unfading. Is Bathurst echoing Spicer in its defiant opening lines? “Don’t sell anything inside yourself for money or whatever it controls; remember legal tender only affords temporal control of material goods & treat it like dogshit you scrape off your shoe . . .” Which recalls Rimbaud’s lines in “Nocturne vulgaire”:

—And, whipped through the splashing of waters and spilled drinks, send us rolling around on the barking of dogs . . .
—One breath blows away the boundaries of the hearth. 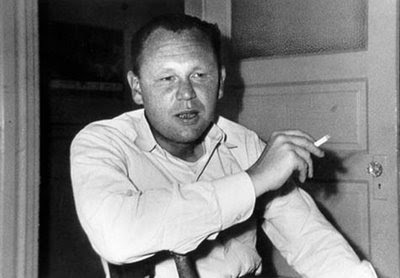