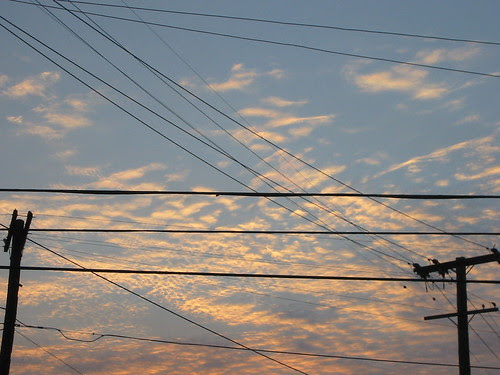 Word is, the inestimable and fiercely independent Henry Gould’s written a fine review of my book, Breeze, and the inestimable and poetically polyglot John Tranter’s published it in Jacket. Gould makes me out a flagrantly smarter and astonishingly better reader than I am, quotes lines out of my poems wisely and generously, and deftly inserts my work into a tradition—just about everything one could possibly ask of a review. So—a public thanks, Henry. Trouble is, in my own “personal pantheon,” I put both Stevens and Whitman on somewhat lower pedestals—indeed, regarding the former, I wholly and abashedly doubt I have ever made my acquaintance with all of Stevens’s lines. However, it occurs to me: if one were to rub the two sticks, Stevens and Whitman, together rather strenuously, one’d likely stir up a conflagration not unlike that of A. R. Ammons. Those dozen or so years in Ithaca—maybe more of the Old Peanut-head’s wild synthesizing rubbed off on me than I knew (and here I thought I was studiously avoiding that particular influence), something “in the air,” like the ’flu.

Out of Edmund White’s My Lives:

Like all key words in my vocabulary, love puzzles me so much I can scarcely say whether I think it’s good or bad. It’s good (and bad) because passion-love, unlike esteeem-love, is transformative, obsessional, impractical. It can’t be fitted in with a job, errands, homework. It pushes friendship aside and upstages family attachments. It crowds out every mild or disinterested pleasure; in fact it has little to do with pleasure of any sort except at the very beginning of its trajectory when the poor lover still imagines he might live happily ever after with the beloved.

Love requires incomprehension. We can love only the people who are opaque to us. Or rather opacity is only another aspect of the divine. We don’t understand the gods but we can love them, especially when they appear in human form.

The story of “the gloomy Romanian aphorist Cioran eating periwinkles with a straight pin in a Paris café.”

The possible apocryphal story of Jean Genet high on plenty of Nembutal, dancing for the Black Panthers in a pink negligee.

Reading Javier Marías’s short novel, The Man of Feeling (El hombre sentimental, translated by Margaret Jull Costa). Monologue of an opera singer. “I have never seen the point of talking about music, it has always struck me as either exhausting and arid or frustrating and stupid. Either you talk about the technical aspects, which is exhausting and arid, or you talk in sentimental terms, which is just frustrating and stupid, mere chatter.”

The uncertainty of the dream narrative versus memory’s narrative. (Somehow I think of Jean Eustache’s little movie called Une Sale Histoire—“A Dirty Story”—with its two narrators—only one an “actor”—each relating the same story of discovering a peephole between the men’s and women’s toilettes in a Parisian restaurant.) Marías:

I do not know why the selective memory of dreams is so different from that of our conscious senses, but I cannot believe in those vengeful explanations according to which the things that the latter suppresses resurface, in various guises, in the former. Such a belief, I feel, contains an excessively religious element, a vague idea of reparation in which I cannot help but see traces of such things as the presence of evil, turning a blind eye, the oppression of the just, the struggle between opposites, the truth waiting to be revealed and the idea that there is a part of us which is in closer contact with the divinities than our own direct perceptions. And that is why I am more inclined to believe that the frequent slowing down of time in dreams provides a civilized, conventional breathing space of a dramatic or narrative or rhythmic nature, like the end of a chapter or an interval in a play, like a post-prandial cigarette. Or the minutes spent leafing through the newspaper before getting down to work, the pause before reading a long-feared letter or that last glance in the mirror before going out for the night.

Marías’s is an indulgent prose, refulgent, dedicated to its languors and ellipses. Often reminiscent of W. G. Sebald. “Proustian” is the commonest epithet.

The story of the opera singer’s throat-clearing gargle with the clear white of an egg.

Javier Marías’s “Epilogue: Something Unfulfilled”: how the novel started with two images. One—unused, “it served only as a stimulus, it was—to use Nabokov’s expression—its first throb”—belonging “not so much to the real world as to an illustrated edition of Wuthering Heights: “a man and a woman standing in a rural landscape and separated by a fence.” The other of a (real world) woman encountered on the Milan-Venice train: “She was wearing an anachronistic pearl necklace; she was wearing a red stole around her neck; she was wearing a double silver ring on her middle finger.” And: “Her head was back, but her face was covered by her straight, brown hair, deliberately thrown forward, perhaps to protect her shallow train-bound sleep from the light, perhaps, too, so as not to offer up, gratis, the image of intimacy and abandon of which she herself would be unaware, her sleeping, lifeless image.” Two images and the opening sentence: “I don’t know whether I should tell you my dreams.”

Marías: “I don’t know, but I do believe that love is based in large measure on its anticipation and on its recollection.” And: “. . . as the narrator of The Man of Feeling seems to acknowledge: ‘For, as I well know,’ he says, ‘the most effective and lasting subjugations are based on pretence or, indeed, on something that has never existed.’”

Marías: “. . . a man writing can begin to understand what he is writing from one chance phrase that tells him—not suddenly, but slowly—why all the other phrases were as they were, why the were written in that way (which he will see now as having nothing to do with either intention or chance), when he thought he was just feeling his way forward, merely playing with paper and ink to pass the time, because he has been asked to do so or out of the sense of duty felt by all those who have no duty.” (Reminding me of the Kurt Schwitters remark: “A door may happen to fall shut, but this is not by chance. It is a conscious experience of the door, the door, the door, the door.”)

Somehow, in Marías’s writing—or my reading of that writing, here, lazy, pert, amidst rare spells of irrefragable attention—what I “apply” all statement to, is writing. If a character admits (through “a mouthful of unexhaled smoke”) that “It’s hard to know whom one favors by an action or by an omission, but one can also tire of having no preferences at all,” I relate it not to a sudden alliance between lovers—or a deft sundering—but to the way one occasionally must push against one’s own “natural” writing, tinge it with an alterity it “normally” relinquishes. The squish of defiance. The high brassy prospect of tomfoolery. The comatose whims of denial. Etc.

William “Seven Types of Ambiguity” Empson’s vouchsafe of disagreement. To disagree adds something (if only a wronged voice) to the available arguments—a refutation where none previously existed. It is to come down on the Medusa-spiked head of variety. It is to seize a dogma by the single horn of its fallacy, hoo! Too: the most “morally disreputable” thing a writer is (capable of being) culpable of: suppressing the conflicts that trigger the intellect, that fire off one’s own intellect.” (You rooters for a placid playground, look out!)