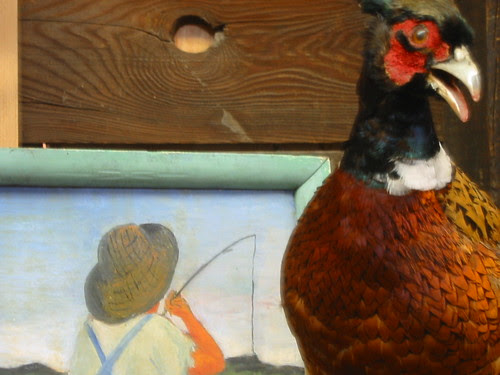 Out, hoofing the dusk. What’s up in the air is a circling of nighthawks, near kettle-forming. Not the sort of behavior I associate with nighthawks. Usually, downtown, they sail out singly between buildings: one knows they’re around by the nasal beeep, “catarrhy,” I’ve called it, possibly thrice in my (meagerly-associable) outer consciousness, my “work.” So I look. The kettle drifts vaguely south, amiable, loose, with individual gymnastic maneuvres (“thieving the air of its insects”). I figure I can see the white wing-patches (undersides), though I cannot. Nighthawks are not hawks, they are goatsuckers (Caprimulgidae). Peterson says “ample tailed nocturnal birds with small bills and weak, tiny feet.” (Tempting me to repeat the perfectly gaseous remark of Wyndham Lewis: “Many small-nosed men have big feet.”) Related to the whip-poor-will, and chuck-will’s-widow. The other notable tidbit of Peterson: “In courtship the male folds his wings and drops earthward like a dive-bomber, zooming up sharply at the end of the drop with a sudden deep whir that sounds like the well-known ‘Bronx cheer.’”

Odd to fossick the files of one’s own familiar machine and find things one cannot recollect. And note how impossibly long ago one writ such lordly “gunk.” Look, here’s one called “Libra,” dated 22 February 1998:

To delimit the field, uproot the lanes of memory and pursue
Byzantine the writing of beeves.

Diverse strategies: the weight of Germany, the Boston crater, the hard
Necessity of whatever tints the milieu.

One catalyst is the storm full throttle, conducive
To the notion that a narrative self threatens integrity.

Lashing out at the pandemic, “law so lordliche and loth,” or going about
Collecting Cuba in its juices.

Ain’t that something? I fully intend to dismantle that thing, so here’s the last you’ll see of it. Goo’bye!

Though (musky with yesteryear’s scent) I cannot forego one more, a twin, scribed just the preceding day (21 February 1998). It is called “Historia de la Eternidad,” and it is, as Philip Levine would say, a motherfucker:

O contraband! Distant loins of salt!
The balustrade spurns the use of
Risk. A liquid columnar shimmering!

Papier Arches with different sound-textures scribbled on it.
My jacket shed at the reading.
Copperplate. Potential for “deep storage.”

Brunt of a cruel prank
Borne by the circular kind
Of story: intuitional lock-up.

Tense, or deadpan in mutuality’s
Barrio, its glossy refrain. There
Is no night that attains morning.

To the chopper with it!

How easily I amuse myself.