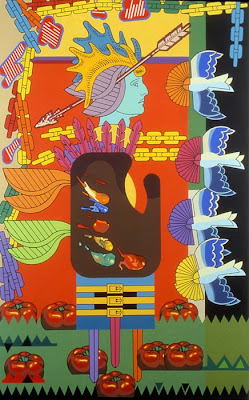 Popping the top-knot up (briefly) to record some of Trevor Winkfield’s iconoclastic brilliance. Out of a piece called “From a Friend of Gerald Murphy”—collected in the indispensable George Braque and Others: The Selected Art Writings of Trevor Winkfield (1990-2009) (The Song Cave, 2014):

To the question “Who or what has been blocking our view of Gerald Murphy and his ilk?” we need do no more than point our finger at Abstract Expressionism. For, like some garrulous uncle whose bulky form hogs both fireplace and conversation, the Abstract Expressionists have been accorded a reverential deference which, to some of us, now seems a mite slavish, if not downright unhealthy. As a group, they’re not that important, and should perhaps be given a status akin to that of the French Fauves, as a transitory phenomenon and not the be-all and end-all of a national aesthetic. However unwittingly, the movement (as opposed to individual members) now acts as a monolith diverting attention from those American artists who came before and those who came after, blurring what seems to me the cardinal virtue of American art: its championing of individuals rather than movements (which, in a nutshell, is the cornerstone of American civics itself). Dispensing with the monolithic viewpoint to treat Abstract Expressionism as an aberration might involve resurrecting the hackneyed comparison of American art to a “various field.” So be it, though we have to admit it’s a very unruly field, one in which a hodge-podge of ornery oddballs, disrespectful deadbeats and willful eccentrics demand equality with the giants planted among them. (In sweet revenge, several outsiders—Murphy included—have themselves gained giant stature, albeit posthumously.)
Rambling through Western art—the only territory where I don’t have to flourish my learner’s license—I’ve not stumbled across a more idiosyncratic or a more persistent bunch than the Americans (though Italian Primitives of the thirteenth to fifteenth centuries run Americans a close second in terms of bewildering variety and dogged determination). An unbroken chain spanning a century and a half, individualism is obviously the American tradition.
To those who can’t put faces to names, tabulating some of American art’s wilder blooms might seem a futile exercise, on a par with affixing Latin tags to the daisy family. And though one could argue the livelong day the exact point of American art’s genesis, let’s imagine this florid cavalcade starting around 1850 with John Quidor, then wend our way via Albert Pinkham Ryder and John Peto to Louis Eilshemius, John Covert, Marsden Hartley and Charles Burchfield. Then past Florine Stettheimer, Patrick Henry Bruce and John Graham, pausing to admire our very own Gerald Murphy, then Charles Demuth, Ivan Albright and Arshile Gorky. No sooner have we left Walter Murch, George Ault, Alice Neel and Alfred Jensen, than Bruce Conner, Albert York and Jess hove into view. And that’s only one row, on one side of one path. A whole flotilla of substitutes could be made without lowering the temperature. With a little imaginative juggling even major painters can be slotted into the autodidact mold: Jackson Pollock, the drunk who dribbled paint! Jasper Johns, the man who fabricated flags from molten wax! Seemingly self-taught, coming out of nowhere, they’re all of a piece, and all more or less presented themselves as outsiders . . .

And, out of the wonderfully lively and astute exchanges recorded in How I Became a Painter: Trevor Winkfield in Conversation with Miles Champion (Pressed Wafer, 2014):

. . . I must mention jigsaws, which taught me about collage, how to manipulate pieces to construct a narrative. In a literal sense, I learned how to put together a picture by finishing jigsaws. Another lesson they taught me was how to look at pictures closely, and how abstract—almost incomprehensible—large areas would often remain until the final two or three pieces were found and slotted into position. I had one jigsaw that reproduced a Constable landscape in which sky and cloud formed a large empty area at the top. I eventually figured out which way the brushstrokes flowed by examining the pieces closely, which gave me clues as to the optimum way in which I should line up the clouds. It took very careful looking, looking intently with my nose close to the puzzle’s surface, which is how I still like to look at paintings. Years later, much later, this slotting together of fragments, seeing things out of context supplied me with another idea as to how to really get to know a painting, particularly those paintings that cover large areas of canvas. It’s a device almost worth patenting! The first time I used it was in the Louvre, standing in front of my favorite painting, Jean Malouel’s The Last Communion and Martyrdom of Saint Denis, which he painted around 1415 for his patron, the Duke of Burgundy. Endlessly fascinating.
Every summer when I visited Paris I’d go look at it—intently, or so I thought. But it dawned on me, after my second or third visit, that my eyes had been automatically focusing on what they’d been trained to focus on, the obvious targets: faces, hands, feet and costumes—all the shapes I felt visually comfortable with. To overcome this, on a subsequent visit I brought along my camera and, without looking where I was pointing it, I went over the entire surface, taking random snaps, using up the whole roll of film. When I got the photographs back from developing, their fragmentation, the random angles they’d been shot from, looking at some upside down—all this exposed an incredible number of details and interior structures that I’d previously been unaware of. Chopped up, it became a totally different painting from the one I thought I knew so well.

The quality of the attending. Refusing to be swayed (or assuaged) by the interfering static of the “surround”—be it pictorial or “social.” Observations worth applying to the literary field. Note, too, Miles Champion’s deft limning of a poetics of Winkfieldian drawing and painting:

. . . The first drawing of yours I saw was your contribution to the anthology for Schuyler, That Various Field, and I remember being struck by the fact that, while it clearly was a drawing, it didn’t look like one—its creator had clearly found an elegant solution to Duchamp’s “tyranny of the hand” while somehow retaining a sense of touch. I think flatness has a great deal to do with it: my first introductions to art were, like yours, all via reproductions in books and on postcards, and the first poems to really excite me were also decidedly flat, and cut with bland, non-poetic elements . . .
Your Schuyler drawing seemed to share a quality with much of the poetry I was reading soon after—and as a result of—reading John [Ashbery]’s work: Ted Berrigan’s Sonnets, Clark Coolidge (especially the run of books from Flag Flutter & U. S. Electric through Own Face), Larry Eigner—poetry that seemed more built than written, the words as building blocks, each flatly displayed in natural light, with no shadows or recesses in which the author as ego could grow monstrous. These word-bricks seemed to have little halos of space around them, negatives of the black outlines around the acorns, pipes and pea pods in your cover designs . . . 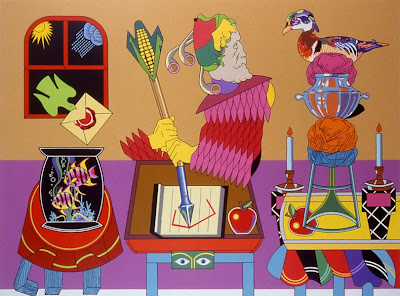 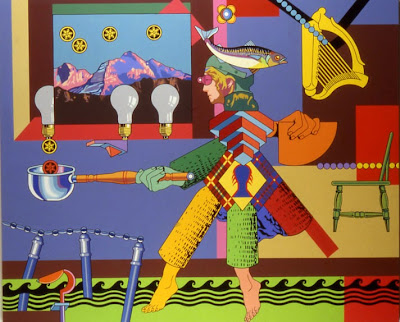 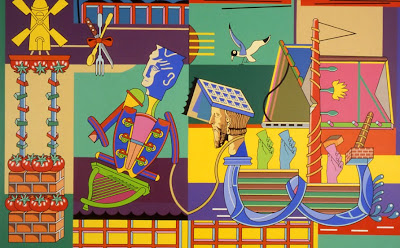 Trevor Winkfield, “Voyager II,” 1998
(John Ashbery: “. . . its effect is the same one a musical score offers a person with some ability for reading music—‘sight-reading.’ Each element in the painting has its precise pitch, its duration. . . . What's clear is that there is no verbal equivalent for taking in the picture, just as there is none for assimilating a piece of music, which is as it should be.”)