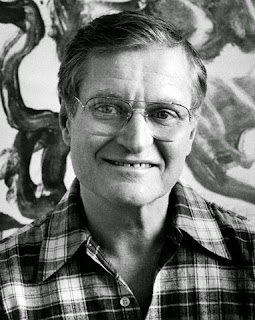 The formalist method: suitable for those ignorant of, or indifferent to, history. This, surely, is part of its appeal now. One doesn’t need to be “learned” to understand a literary text or a painting, only intelligent. One doesn’t need more than the work itself.*

But What Is the Reader To Make of This?

A lake of pain, an absence
Leading to a flowering sea? Give it a quarter-turn
And watch the centuries begin to collapse
Through each other, like floors in a burning building,
Until we get to this afternoon.

Those delicious few words spread around like jam
Don’t matter, nor does the shadow.
We have lived blasphemously in history
And nothing has hurt us or can.
But beware of the monstrous tenderness, for out of it
The same blunt archives loom. Facts seize hold of the web
And leave it ash. Still, it is the personal,
Interior life that gives us something to think about.
The rest is only drama.

Meanwhile the combinations of every extendable circumstance
In our lives continue to blow against it like new leaves
At the edge of the forest a battle rages in and out of
For a whole day. It’s not the background, we’re the background,
On the outside looking out. The surprises history has
For us are nothing compared to the shock we get
From each other, though time still wears
The colors of meanness and melancholy, and the general life
Is still many sizes too big, yet
Has style, woven of things that never happened
With those that did, so that a mood survives
Where life and death never could. Make it sweet again!

Whatever the artist does is in (usually conscious) alignment with something else already done, producing a compulsion to be continually rechecking his situation, his own stance with those of his predecessors and contemporaries. To compensate for this ignominious enslavement to history, the artist exalts himself with the dream of a wholly ahistorical, and therefore unalienated, art.

Art that is “silent” constitutes one approach to this visionary, ahistorical condition.
Consider the difference between looking and staring. A look is voluntary; it is also mobile, rising and falling in intensity as its foci of interest are taken up and then exhausted. A stare has, essentially, the character of a compulsion; it is steady, unmodulated, “fixed.”
Traditional art invites a look. Art that is silent engenders a stare. Silent art allows—at least in principle—no release from attention, because there has never, in principle, been any soliciting of it. A stare is perhaps as far from history, as close to eternity, as contemporary art can get.