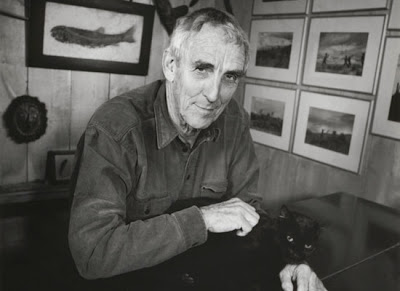 Three contiguous movements out of Peter Matthiessen’s Far Tortuga (1975). With praise for its unmitigably spare weathers, its ferocious lovely banter:

The Eden’s course is south by east, 165 degrees, down the Main Cape Channel. Off to windward is the line of reefs: Half Moon Cay, Bobel, Hall Rocks, Cock Rocks, Edinburgh Reef, Cayo Muerto, known to turtlers as Dead Man Bar.


. . . forward of de cobberknife it tapers off. Dass where you shoot him, on de fall, just over de edge of his jalousies. One bullet dere kill a shark dead; eitherwise he don’t pay much attention. So dis tiger took dat bullet and head straight down and bury his head so deep in dat sand dat he were standin straight up, and his tail stickin out de water so you could snare it without ever thinkin about gettin wet. And dis were in ten feet of water.

Now dem big sharks dat you seen dere at Edinburgh Reef, dat is de turtle enemy. Big turtle now, shark got to bite him right to get him, and de turtle is very fast, so de shark try to dismantle him so he can go to work on him. Take a fin off or go for de head. But I seen many times dat when de shark bite de head off of de turtle, he give up den and go away. And dat is cause in my opinion dat turtle head is still openin and closin inside of de shark, de way de turtle do when you chop his head off.

Make him uneasy, and he abondon dat turtle.

Byrum best remember dat on de day dat big shark come for him. Just keep dat big mouth workin when he bite your head off, Byrum, and maybe he leave de rest of you alone.

No, dat not a sprat bird—dat is a egg bird! Look something like a nightingale! De sprat bird has yellow bill and yellow feet!

You thinkin about de bos’n bird!

The northeasterly trades continue, bearing away heat and humidity in a hard breeze; as the day wears on, the wind increases.


See dat? Comin back at us again! I hoped dat wind were done with us, but when I seen dat star, I knew dat it were not!

The men stare somberly at the green seas and the white sky of spring. The world is empty.

. . . I was fascinated by the problems of how to present that tropical world, the hazed sunlight, the strong trade winds, the old ship, the sea, the almost Chaucerian language of those turtlemen, unchanged for centuries. I wanted to experiment with silences and space—I mean quite literally the extent of white space on the page between incidents, monologues, songs, wind gusts, squabbles, the shudder of the hull in the rough weather, everything. More than anything I’ve done, perhaps, Far Tortuga was influenced by Zen training. The grit and feel of this present moment, moment after moment, opening out into the oceanic wonder of the sea and sky. When you fix each moment in all its astonishing detail, see its miracle in a fresh light, no similes, no images are needed. They become “literary,” superfluous. Aesthetic clutter.

And, out of an earlier conversation with George Plimpton:

Far Tortuga is based on a sea turtle fishing voyage off Nicaragua: tortuga is the Spanish word for sea turtle, and sometimes refers to a cay where green turtles are found. . . . I was moved by the stark quality of that voyage, everything worn bare by wind and sea—the reefs, the faded schooner, the turtle men themselves—everything so pared down and so simple that metaphors, stream-of-consciousness, even such ordinary conventions of the novel as “he said” or “he thought,” seemed intrusive, even offensive, and a great impediment, besides. So from the start I was feeling my way toward a spare form, with more air around the words, more space: I wanted the descriptions to be very clear and flat, to find such poetry as they might attain in their very directness and simplicity. In fact, I can only recall one simile in the whole book. And eventually, I attempted using white space to achieve resonance, to make the reader receive things intuitively, hear the silence in the wind, for instance, that is a constant presence in the book.
In Japanese sumi painting, in a drawing of a bamboo stalk, the brush moves upward, leaving a white space between strokes to suggest the nodes of the bamboo that separate sections of the stem; it’s the emptiness that brings the rest to life. Similarly, the emptiness and silence represented by white spaces set up reverberations in what is written. . . .