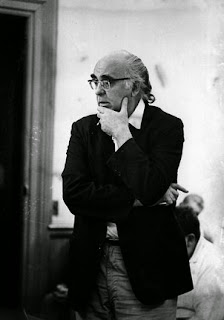 Intent of the offertory: a benign osculatory (or oscillatory) mayhem, knowledge made up out of a effervescence of gatherings (“haunte floures by cause of gadrynge of hony”). A gestural sup.

Charles Olson, out of the 1963 conversation with Harriet Gratwick, collected under the title “Under the Mushroom” in the Ralph Maud-edited Muthologos: Lectures and Interviews (2010), asserting “a belief that etymology is even behind mythology as the secret of the universe”:

Etymology. And there’s only two forms of knowing that I can figure out exist. One is GNA and the other is VID, and VID is seeing and GNA is prajna and is apprehension that I think you can only call oral, in the sense of sounds, therefore language. Yes, therefore language, therefore eyes, and that’s all. There’s a double—there’s a staple or two of the agents, the division: one is the eye and the other is a knowing which is, well, I would even say oral but I don’t want to press the point. It is GNA, though. Leave it just in the g-n-a-, which is the basic root of “knowing.” K-n-o is g-n-a, actually, simply slipped. Kna, kno. And VID, because we all use the word—again this is where the vocabulary matters, because we all use the word “vision.”

Cf. Olson’s primordial (or archetypal) lines “whatever you have to say, leave / the roots on, let them / dangle / / And the dirt / / Just to make clear / where they come from”

And (out of the Gratwick interview):

. . . you could talk archetext at the point that you talk archetype. And that I’m convinced of myself, being a Tantrist; I utterly believe that you can talk language, literally, human language as recorded from text. Literally, from text. God’s a bookman, as well as the other things He is. Or the subject is a condition of the universe, and that “this original text is perception itself.” Which gets us really home if you talk poetry.

I take SPACE to be the central fact to man born in America, from Folsom cave to now. I spell it large because it comes large here. Large, and without mercy.
It is geography at bottom, a hell of wide land from the beginning. . . .

And there’s William Carlos Williams, out of In the American Grain (1925), the chapter titled “Descent” with its terrifying (and defiant) talk of “sinking” and “ground” (in the figure of Sam Houston who, in sumptuous recoil against loss, “took the descent once more, to the ground”). Turning to American writers:

. . . Poe can be understood only in a knowledge of his deep roots. The quality of the flower will then be seen to be normal, in all its tortured spirituosity and paleness, a desert flower with roots under the sand of his day.
Whitman had to come from under. All have to come from under and through a dead layer.
But this primitive ordeal, created by a peculiar condition of destiny (the implantation of an already partly cultured race on a wild continent) has a plant in its purpose, in its lusts’ eye, as gorgeous as Montezuma’s gardens of birds, wild beasts and albino natives in wooden cages.
But he who will grow from that basis must sink first.
If he goes to France, it is not to learn a do re mi fa sol. He goes to see a strange New World.
If not definitely a culture new in every part, at least a satisfaction. He wants to have the feet of his understanding on the ground, his ground, the ground, the only ground that he knows, that which is under his feet. I speak of aesthetic satisfaction. This want, in America, can only be filled by knowledge, a poetic knowledge, of that ground. Since this is difficult, due to the hardships which beset the emergence of a poet: A poet is one related to a basis of aesthetic, spiritual, hypothetical, abnormal—satisfaction, . . . since this is so, the want goes for the most part unsatisfied in America or is satisfied by a fillgap. The predominant picture of America is a land aesthetically satisfied by temporary fillgaps . . .

And, damningly (and hearteningly):

It is imperative that we sink. But from a low position it is impossible to answer those who know all the Latin and some of the Sanskrit names, much French and perhaps one or two other literatures. Their riposte is: Knownothingism. But we cannot climb every tree in that world of birds. But where foreign values are held to be a desideratum, he who is buried and speaks thickly—is lost.
There is nothing for a man but genius or despair. We cannot answer in the smart language, certainly it would be a bastardization of our own talents to waste time to learn the language they use. I would rather sneak off and die like a sick dog than be a well known literary person in America—and no doubt I’ll do it in the end.