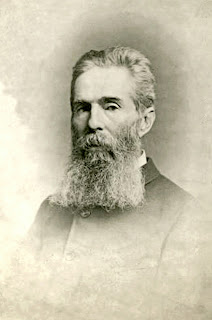 Out of Melville’s marginalia scrawled across the pages of Emerson’s “The Poet.” At Emerson’s lines—

Every new relation is a new word. Also, we use defects and deformities to a sacred purpose, so expressing our sense that the evils of the world are such only to the evil eye. In the old mythology, mythologists observe, defects are ascribed to divine natures, as lameness to Vulcan, blindness to Cupid, and the like, to signify exuberances.

Written in contempt or approbation? Marking Emerson’s line “the evils of the world are such only to the evil eye” with a bold X, Melville asks:

What does the man mean? If Mr
Emerson travelling in Egypt should
find the plague-spot come out on
him—would he consider that
an evil sight or not? And if evil,
would his eye be evil because it
seemed evil to his eye, or, rather, to
his sense using the eye for instrument?

For, as it is dislocation and detachment from the life of God, that makes things ugly, the poet, who re-attaches things to nature and the Whole,—re-attaching even artificial things, and violations of nature, to nature, by a deeper insight,—disposes very easily of the most disagreeable facts.

—Melville underlines “disposes very easily of the most disagreeable facts” and pencils in the margin, drily, and rather sassily:

Language is fossil poetry. As the limestone of the continent consists of infinite masses of the shells of animalcules, so language is made up of images, or tropes, which now, in their secondary use, have long ceased to remind us of their poetic origin. But the poet names the thing because he sees it, or comes one step nearer to it than any other.

Melville, writing across the bottoms of two pages and up the margin of another:

This is admirable, as many other
thoughts of Mr. Emerson’s are. His gross
and astonishing errors & illusions
spring from a self-conceit so
intensely intellectual and calm that at
first one hesitates to call it by its right
name. Another species of Mr Emerson’s
errors, or rather, blindness, proceeds from a defect in
the region of the heart.

Out of The Confidence Man: His Masquerade (1857), Melville’s portrait of “Mark Winsome,” a character largely conceded to be modeled on Emerson:

. . . a blue-eyed man, sandy-haired, and Saxon-looking; perhaps five and forty; tall, and, but for a certain angularity, well made; little touch of the drawing-room about him, but a look of plain propriety of a Puritan sort, with a kind of farmer dignity. His age seemed betokened more by his brow, placidly thoughtful, than by his general aspect, which had that look of youthfulness in maturity, peculiar sometimes to habitual health of body, the original gift of nature, or in part the effect or reward of steady temperance of the passions, kept so, perhaps, by constitution as much as morality. A neat, comely, almost ruddy cheek, coolly fresh, like a red clover-blossom at coolish dawn—the color of warmth preserved by the virtue of chill. Toning the whole man, was one-knows-not-what of shrewdness and mythiness, strangely jumbled; in that way, he seemed a kind of cross between a Yankee peddler and a Tartar priest, though it seemed as if, at a pinch, the first would not in all probability play second fiddle to the last.

Nay, I do not oscillate in Emerson’s rainbow, but prefer rather to hang myself in mine own halter than swing in any other man’s swing. Yet I think Emerson is more than a brilliant fellow. Be his stuff begged, borrowed, or stolen, or of his own domestic manufacture he is an uncommon man. Swear he is a humbug—then is he no common humbug. Lay it down that had not Sir Thomas Browne lived, Emerson would not have mystified—I will answer, that had not Old Zack’s father begot him, old Zack would never have been the hero of Palo Alto. The truth is that we are all sons, grandsons, or nephews or great-nephews of those who go before us. No one is his own sire.—I was very agreeably disappointed in Mr Emerson. I had heard of him as full of transcendentalisms, myths & oracular gibberish; I had only glanced at a book of his once in Putnam’s store—that was all I knew of him, till I heard him lecture.—To my surprise, I found him quite intelligible, tho’ to say truth, they told me that that night he was unusually plain.—Now, there is a something about every man elevated above mediocrity, which is, for the most part, instinctuly perceptible. This I see in Mr Emerson. And, frankly, for the sake of the argument, let us call him a fool;—then had I rather be a fool than a wise man.—I love all men who dive. Any fish can swim near the surface, but it takes a great whale to go down stairs five miles or more; & if he dont attain the bottom, why, all the lead in Galena can’t fashion the plumet that will. I’m not talking of Mr Emerson now—but of the whole corps of thought-divers, that have been diving & coming up again with bloodshot eyes since the world began.
I could readily see in Emerson, notwithstanding his merit, a gaping flaw. It was, the insinuation, that had he lived in those days when the world was made, he might have offered some valuable suggestions. These men are all cracked right across the brow. And never will the pullers-down be able to cope with the builders-up. And this pulling down is easy enough—a keg of powder blew up Block’s Monument—but the man who applied the match, could not, alone, build such a pile to save his soul from the shark-maw of the Devil. But enough of this Plato who talks thro’ his nose.

We are always reasoning from the seen to the unseen. Hence the perfect intelligence that subsists between wise men of remote ages. A man cannot bury his meanings so deep in his book, but time and like-minded men will find them. Plato had a secret doctrine, had he? What secret can he conceal from the eyes of Bacon? of Montaigne? of Kant? Therefore, Aristotle said of his works, “They are published and not published.”