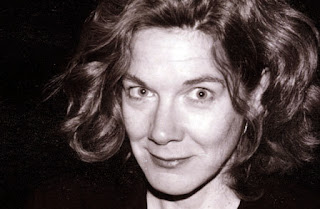 Thumbing through Mary Ruefle’s Madness, Rack, and Honey: Collected Lectures (Wave Books, 2012), I read (out of “I Remember, I Remember”):

I remember my first Ashbery reading . . . Ashbery was reading from his new book, Three Poems, and he said that it was a lot like watching TV—you could open the book anywhere and begin reading, and flip around the book as much as you wanted to. I remember hating him for saying this. I remember the word sacrilege came to mind. I remember not liking that reading.

I remember, two years later, reading Three Poems on a grassy slope while across the road three men put a new roof on an old house, and I was in love with one of them. I could watch the men working as I read. I remember that everything I was reading was everything that was happening across the way—I would read a little, then look up, read a little, then look up, and I was blown apart by the feeling this little book was about my life at that moment, exactly as I was living it. I remember loving the book . . .

“A lot like watching TV”: and I recall Ashbery’s remark in The Paris Review interview (c. 1983): “I feel that poetry is going on all the time inside, an underground stream. One can let down one’s bucket and bring the poem back up. . . . It will be not dissimilar to what I have produced before because it is coming from the same source, but it will be dissimilar because of the different circumstances of the particular moment.” Or, pushing into recall’s never-ending reaches and hinterlands, I hunt up V. N. Vološinov’s Marxism and the Philosophy of Language (written in the late 1920s, published in English translation in 1973) in order to re-read the formula:

Language cannot properly be said to be handed down—it endures but it endures as a continuous process of becoming. Individuals do not receive a ready-made language at all, rather, they enter upon the stream of verbal communication; indeed, only in this stream does their consciousness first begin to operate.

Perfect moment, therefore, to dip randomly into Three Poems (1972) in a humor of sortes Ashberianae, to verify and release the moment’s becoming. Here (out of “The New Spirit”):

. . . I am afraid that you will never see your way clear through the velleities of the excursion to that other shore, eternal despite its finite nature, of acquisitions, suggestions and hints, useful, irregular: the exposed living that is going on, and of which you are a part, so that it could be said to exist only for you. You are too close to this happy state for it to matter for you. But meanwhile I am to include everything: the furniture of this room, everyday expressions, as well as my rarest thoughts and dreams, so that you may never become aware of the scattered nature of it, and meanwhile you are it all, and my efforts are really directed toward keeping myself attached, however dimly, to it as it rolls from view, like a river which is never really there because of moving on someplace. And so the denser moments of awareness are yours, not the firm outline I believe to be mine and which is probably a hoax as well: it contains nothing after all, only a few notions of how life should be lived that are unusable because too general.

Or here (turning a few pages):

. . . it dawned on him all of a sudden that there was another way, that this horrible vision of the completed Tower of Babel, flushed in the sunset as the last ceramic brick was triumphantly fitted into place, perfect in its vulgarity, an eternal remainder of the advantages of industry and cleverness—that terror could be shut out—really shut out—simply by turning one’s back on it. As soon as it was not looked at it ceased to exist.

The “firm outline” a “hoax” and the “terror” of a “completed Tower of Babel”—both suggesting the ongoing refusal of language’s “finish.”