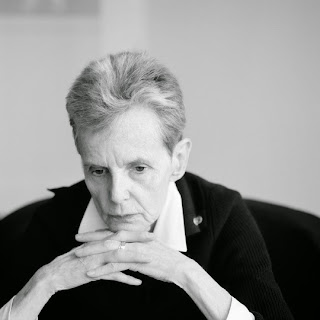 Foundering in aimlessness, seemingly in vacuo, seemingly in perpetuo. Distracted, irresolute, skittish—though hardly worse than suffering under, say, “A cloak of somnolence, heavy and sticky as moonlight” (Ashbery). One chaunts the mysteriously soothing and anonymous Elizabethan lyric William Byrd put to music in 1588 (here out of the Petyt manuscript):

My mynde to me a kingdome is,
such perfect ioye therin I finde
That it excels all other blisse,
that world affordes or growes by kinde
Though muche I wante which most men have
yet still my mynde forbids to crave . . .

A mouse, gray-colored patch of grace abounding, dashes across the table where I sit, skitters through a jumble of coaxial cables. (No attempt to read the vestigial dei off that page of the Book of Nature.) Or there’s Susan Howe (the solace of stray lines out of “Thorow”):

The track of Desire

Must see and not see

Must not see nothing

Burrow and so burrow

Eating nothing but hominy

See only the tracks of rabbit

In “Narrative in Non-Narrative,” a succinct prefatory intensity (or “integrity”: I think suddenly of Buckminster Fuller’s coinage “tensegrity”—tensional integrity—and long to see in Howe’s Xerox’d fields of lines a like balance of forces, individual components held in momentary abeyance and interlock in a poise of pure tension) to “Thorow,” Howe writes (after quoting Deleuze and Guattari: “The proper name is the instantaneous apprehension of a multiplicity. The proper name is the subject of a pure infinitive comprehended as such in a field of intensity”):

Thoreau once wrote to a friend: “am glad to see that you have studied out the ponds, got the Indian names straightened out—which means made more crooked—&c. &c.”
Sir Humfrey Gilbert wrote in A New Passage to Cataia: “To prove that the Indians aforenamed came not by the Northeast, and that there is no thorow passage navigable that way.”
. . .
Work penetrated by the edge of author, traverse multiplicities, light letters exploding apprehension suppose when individual hearing
Every name driven will be as another rivet in the machine of a universe flux

(Howe, recording the writing of “Thorow” in a rented cabin near the town of Lake George, New York: “After I learned to keep out of town, and after the first pain of dislocation had subsided, I moved into the weather’s fluctuation.”) Out of Howe’s The Difficulties interview,* of “Lake George where I wrote “Thorow”: “If there is a Spirit of Place that Spirit had me in thrall. Day after day I watched the lake and how weather and light changed it.” One gainsay against aimlessness. Out of “Thorow”:

all covered with ise


as surveyor of the Wood

* A terrific movement out of that interview (I think of “traverse multiplicities, light letters exploding apprehension” or “Scattering As Behavior Toward Risk”—such “merveils of divagatinge”):

Sometimes I think my poetry is only a search by an investigator for the point where the crime began. What is the unforgivable crime? Will I ever capture it in words?
I can’t get away from New England. It’s in my heart and practice. The older I get the more Calvinist I grow. In spite of all the pettiness and dour formalism of the Puritans, as we have learned to think of them, and it is all certainly there, and more—I am at home with them.
Hidden under the rigid exterior of a Cotton Mather, under the anger of Mary Rowlandson, under the austerity of Jonathan Edwards, is an idea of grace as part of an infinite mystery in us but beyond us. What we try to do in life is a calling. Carpentry, teaching, mothering, farming, writing, is never an end in itself but is in the service of something out of the world—God or the Word, a supreme Fiction. This central mystery—this huge Imagination of one form is both a lyric thing and a great “secresie,” on an unbeaten way; the only unbeaten way left. A poet tries to sound every part.
Sound is part of the mystery. But sounds are only the echoes of a place of first love. The Puritans or Calvinists knew that what we see is as nothing to the unseen. I know that if something in a word, or in a line in a poem or in any piece of writing doesn’t sound true then I must change it. I am part of one Imagination and the justice of Its ways may seem arbitrary but I have to follow Its voice. Sound is a key to the untranslatable hidden cause. It is the cause. Othello said that. “Othello is uneasy, but then Othellos always are, they hold such mighty stakes,” wrote Dickinson. In the same letter she added “The brow is that of Deity—the eyes, those of the lost, but the power lies in the throat—pleading, sovereign, savage—the panther and the dove!”