CCCXLI
My unyielding receipt
of the pith-
privy notebook, its
prim savagery, its
unnaturally haughty story
of diminishment, filth
and pall. A
black cap of
weather’d basalt plunges
down through aspen-
yellow’d hay meadows
skirt’d with mature
deciduous patches lit
within by dogwoods
and redbuds, understory
froth- and color-
workers. Down with
the clayey creeks,
out where fields
sluice nutrients into
ranges and relent,
the placid tail-
twitching Herefords moony,
red and sculptural.
Down to where
the Venus fly-
trap and honeydew
bogs—tympanums of
earth—bounce muffled
and hummock’d, out
across mudflats to
anchor in ten
fathoms of brackish
water, the whole
descent mimicking a
viscous interior magma
retort to all
fervency, its earnest
dogma of ascent.
Oh, my paint-
fleck’d coevals, don’t
the thunderously august
transports of unreckon’d-
for human hatreds
place their bedung’d
hooves against your
shoulders too, like
giant cows, unresilient
and wayward with
the sudden terrible
knowledge of their
incipient and fungible
turn to lunchmeat?

Gassing off into the pshaw-talker’s idiocy—on effect of speed, its clarify’d demand. How imbecile (one thinks) to write to a tempo—its non-stop weathering. Sensing now that my next writing ought somehow inhabit space—a pre-declared ooze-acre to fill with no daily quota. A thing made coup de foudre’dly evident by my perusal of Paul Metcalf’s Apalache (Turtle Island Foundation, 1976), uncover’d in my weekend “hunt,” in a piece call’d “The Feare in Ye Buttocks”:

Many have trauayled to ſearch
the coaſt of the lande of Labrador,

aſwell to th intente to knowe
how farre or whyther it reachethe,

A highly victual’d book—meaning one’s supped hearty and lengthily “on” a feast of texts in its weaning (for that single piece Metcalf lists thirty or so, mostly voyage and discovery narratives, Hakluyt, Purchas, Parkman, &c.) To make a thing durably, a thing requiring “not speaking words as they changeably fall from the mouth, but peyzing each sillable of each word by just proportion according to the dignity of the subject” (Sidney), which is to say a slowing against rabbitty-clabber’d things of the clock.

The tranquil and patient or reluctant and languid murmur . . . of words that slip by gently or indolently, without the obstacle of the alert reader, or of vehemence, and which are then absorbed passively, as if they were a gift, and which resemble something easy and incalculable that bring no advantage. Like the words carried along or left behind by rivers in the middle of a feverish night, when the fever has abated; and that is one of the times when anything can be believed, even the craziest, most unlikely things, even a nonexistent drop of blood, just as one believes in the books that speak to you then, to your weariness and your somnambulism, to your fever, to your dreams, even if you are or believe yourself to be wide awake, and books can persuade us of anything then, even that they’re a connecting thread between the living and the dead, that they are in us and we are in them, and that they understand us.

The unavoidable somnifacient that reading mostly is? Interruptible by what, the precisely cut word? (Metcalf quoting the Magnalia Christi Americana, regarding Roger Williams: “the fierceness of his talking in publick and the starchtness of his living in private.”) And the original comparing Williams to a windmill:

In the year 1654, a certain Windmill in the Low Countries, whirling round with extraordinary violence, by reason of a violent storm then blowing; the stone at length by its rapid motion became so intensly hot, as to fire the mill, from whence the flames, being dispersed by the high winds, did set a whole town on fire. . . . about twenty years before this, there was a whole country in America like to be set on fire by the rapid motion of a windmill, in the head on one particular man.

Why, now (I am speeding, evidently, out along a spur track, my slowing faltering) do I think of J. H. Prynne’s assessment of F. R. Leavis’s analysis of metaphor (most particularly Shelly’s “tangled boughs of Heaven and Ocean,” in “Ode to the West Wind”):

. . . in the sequence of overt or implied metaphor or simile the initial ground for comparison from which the figure rises often has less primacy in the direction of later development than the new areas of reference introduced by the figure: and that this induces confusion and exemplifies a damaging, central weakness of mind.

And isn’t that sheer breakaway uncontrollable flightiness (“the figure rises”) precisely the beauty of metaphor, that it clambers up as replacement? (Clearly I am having a rather unconvincing conversation with myself. What’d be less painstaking and durably-made than a series of divergent “flights” harum-scarum off the space of this world?) Weekends do that—stretch’d by tenterhooks across three states, diving into too various a chorus of books. Or plunging out into the physical word, a burgeoning junk heap along the Huron, examining defunct industrial crud for its formal properties. What if language only diminishes the world—“tree” delimiting that magnificent red oak there, skinny’d down to its sparse clay-color’d leafage—, isn’t that reason enough to eschew it? This, out of David Batchelor’s Chromophobia, keeps palpably nudging. He’s talking about Aldous Huxley’s “peyote-induced hallucination” of “‘fragments of stained glass’ and ‘huge precious stones’, both of which ‘seemed to possess an interior light’”—along with a raft of similar visions (see Ezekiel) as recount’d in Huxley’s Heaven and Hell:

For Huxley, it was not in itself the rarity of these stones that explained their place in the literature of paradise; it was, again, their colour. For this colour—intense, heightened, pure, unqualified—offered a glimpse of the ‘Other World’, a world beyond Nature and the Law, a world undimmed by language, concepts, meanings and uses. In a way, Huxley’s other world may be as much an Oz as it is an Eden—at least there is very little he says about this realm that doesn’t sound a bit like Dorothy’s ‘somewhere’-that-is-no-longer-Kansas. In Huxley’s writing, mescaline or LSD take you to the ‘antipodes of the mind’, a largely unexplored continent populated by exceedingly improbable’ metaphorical mammal and marsupials—about as improbable as the inhabitant of Dorothy’s vision. One the near side of the rainbow, in the land of the laws and orders of consciousness, there are also similarities between Huxley’s and Dorothy’s pictures. Dorothy’s Kansas, as we know, is grey; Huxley’s Kansas is language, as language greys the world around us. ‘Colour turns out to be a kind of touchstone of reality. That which is given is coloured’, he says, but the intellect, the conceptual structures and the symbol systems we impose on the world are in themselves abstract and colourless. And they in turn drain our perceptions of the colour that is around us.

“Language greys the world around us.” Is it for that that one fires the cotton of language itself, gussying it up, making it rip like a muhfuh? 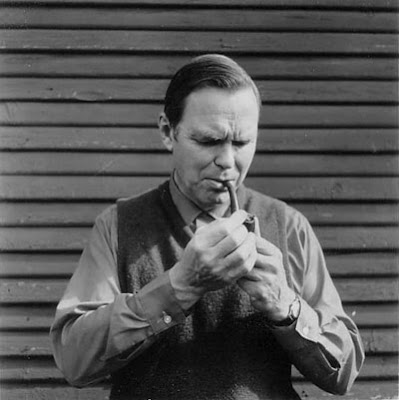