CCCXLIX
The job is to cull
contumely out of the hinterland’s
skittishness, dull down its ‘cloacal
obstynances’ and fix’d risible urges
to a mean stoic acquittal,
a sloughing off of desire’s
inspecificity. Modern electronica is a
big help: techno or trance.
That recidivist hammering roar’s like
an ‘oceanic cypher’—it noteth
a place, and no thing
availeth—a way to bump
up a figure or make
a hieroglyph of a clerk.
Behind the smelting works, scrap-
iron and toss’d off dross.
Black crows sail up against
the yellow sky’s sulfurous stench,
humdrum concomitance of the post-
roost fly-by and dispersal.
Slag under the weeping willow.
Every area’s a staging area.

Struck, reading Charles Bernstein’s “Hearing Voices,” in the Marjorie Perloff and Craig Dworkin-edit’d The Sound of Poetry / The Poetry of Sound (University of Chicago Press, 2009), just how completely the New Criticism fissures that’ve long run (mostly undetect’d) through the writings of some of the Language writing crowd, surface there. “Close listening” straight out of “close reading.” Think of, say, the way I. A. Richards’s Practical Criticism (1929) descends less out of any coherent theoretical concern than a practical (read pedagogical) one, or of R. P. Blackmur’s insistence on the critic’s “job of work,” and compare it to Bernstein’s answer to the self-posed questions: “why this focus on the poet’s performance?” and “Isn’t this just another way of fetishizing the author and the author’s voice?” He writes:

The facts on the ground [note the inappropriate pedagogue as soldier metaphor] are these: the archive of recordings, as well as the live performance, of contemporary poems is almost exclusively composed of poets giving voice to their own work; in the first instance, the claim for the significance of performance is less theoretical than an acknowledgment of actually existing poetic practice.

Think of New Criticism’s making the poem a self-sufficient verbal artifact, and a privileged site for transmitting and disseminating whatever specific aesthetic thing makes a poem a poem. Bernstein writes:

I do fetishize the acoustic inscription of the poet’s voice, or at least I take it as aesthetically significant—partly because doing so returns voice from sometimes idealized projections of self in the style of a poem to its social materiality, to voicing and voices. In that sense, though, any performance of a poem is an exemplary interpretation, that is, one that imagines itself as rehearsal rather than as a finalization.
The alphabet, with its thirty or so marks, offers a remarkably agile technology for noting speech sounds, which, in our digital environment, makes it remarkably easy to cut, paste, and transmit. [Hunh? Is that the “Flarf—it’s the result of the alphabet” defense? Some drop’d logickal connctif, theah . . .] In contrast to alphabetic writing, the grammaphonic inscription offers an immensely thicker description of the voice, making explicit many vocal features that need to be interpolated when a poem is read from an alphabetic script.

Think of the imply’d scientism of Bernstein’s earnest list of “vocal gestures” perceptible in recordings (kin to Richards’s aim to a comprehensive system in Principles of Literary Criticism (1924) with its scorn of the “chaos” of “random aperçues” and “brilliant guesses” that’d defined literary study previously, a revival of the recurrent academic reverie of bringing “literary study to a condition rivaling that of science”):

There are four features, or vocal gestures, that are available on tape but not page that are of special significance for poetry: the cluster of rhythm and tempo (including word duration), the cluster of pitch and intonation (including amplitude), timbre, and accent. The first two of these features can be visually plotted with waveforms; the gestalt of these features contributes to tone.

My slide-rule hangs off my belt, my French curve clutch’d au poing. Bernstein enlists Reuven Tsur, author of “Kubla Khan”—Poetic Structure, Hypnotic Quality, and Cognitive Style (2006), to supply the terms. In doing so, he borrows, too, “two cognitive modes of literary criticism”—and it is here that the recycling of New Critical tenets rallies. Tsur apparently contrasts “Negative Capability” and “Quest for Certainty” and Bernstein’s parsing of it leans hard up against the prime New Critical concept of “ambiguity”:

For Tsur, critics who tend toward a Quest for Certainty display an intolerance of ambiguity, uncertainty, and multiple interpretative possibilities; a resistance to symbolism in favor of allegory; a perceptual dependence on the concrete and an inability to process multiple abstractions; a tendency to reduce a poem’s meaning to a single level (a form of what I call frame lock); a propensity for “extreme” and “polarized evaluations, namely, good-bad, right-wrong, black-white” [“Quietist”-“post-avant”?]; “a greater insensitivity to subtle and minimal cues and hence a greater susceptibility to false but obtrusive clues.” Ambiguity intolerance is also associated with a desensitization to the nonthematized emotional dynamics of a poem, the very kinds of dynamics that are intensified in performance. Tsur notes that his categories are related to psychological studies of dogmatism and the authoritative personality. I would add that they resonate with Wittgenstein’s analysis of “aspect blindness” and George Lakoff’s distinction between the cognitive framework of the “strict father” and that of the “nurturing parent.”

Which “turn to psychology” is a way of returning to one of New Criticism’s founding loci: I. A. Richards’d originally borrow’d Freud’s term “overdetermined” to refer to the presence of a multiplicity of simultaneous meanings in language.

At the end of “Hearing Voices” Bernstein focuses on “accent” in a move to upend the currently construct’d lineage of high modernism. Here he claims

. . . accent is a technical feature that can be used to perform and deform social distinctions and variations. For the modernist poetics of the Americas, the artifice of accent is the New Wilderness of poetry performance, that which marks our poetries with the inflection of our particular trajectories within our spoken languages.
While script permits the poet to elide, if not to say disguise, accent, performance is an open wound of accentual difference from which no poet escapes. This is not the accent of stress but accents of distressed language, words scarred by their social origins and aspirations.

One suspects Bernstein’s jeu de mot propensity flummox’d him here. Is accent a mark of authenticity (“no poet escapes”) or an “artifice,” a “technical feature”? If accent is associated with “distressed language, words scarred,” &c., is there a normative unstress’d and unscarred language? And whose is that? Bernstein makes a case for Zukofsky’s piece “A foin lass bodders,” a “translation of Guido Cavalcanti’s thirteenth-century poem ‘Donna mi prega’ into Brooklynese (itself a foil for Yiddish dialect)” being a kind of trumping of Pound’s 1928 “traduction” of the poem: “The burden of modernist composition was to articulate the range of sounds in complex patterns, not purify the language.” Bernstein quotes the Pound (“Because a lady asks me, I would tell / Of an affect that comes often and is fell / And is so overweening: Love by name . . .”) and argues that “While Pound’s traduction makes Cavalcanti come alive in quasi-idiomatic English rhythms that play to, while transforming, historically mediated standards of high lyric sonorousness [note the disparaging terms: quasi-, English, play to, mediated, there’s something half-ass’d about Pound], ‘A foin lass bodders’ is obtrusively anti-assimilationist, not to say dissident, anti-absorptive both cultural and poetically . . .”:

Mmm. Bernstein calls it “noisy, disruptive, brilliant, and unacceptable all rolled into one.” Peut-être. Though what’d be the verdict if it’d been writ by, say, Boston Brahmin Isabella Gardner? Or by Ezra Pound himself? Or by Joel “De ole bee make de honey-comb” Chandler Harris? Is Pound’s “Hep Cat Chung, don’t jump my wall”—or “Ole Brer Rabbit watchin’ his feet, / Rabbit net ’s got the pheasant beat”—out of the Confucian Shih-ching—a sign of authentic “dissident, anti-absorptive” practice or a species of vaudeville minstrelsy, appropriating, blackface? And isn’t Zukofsky’s “A foin lass bodders” mostly a feat of carnivalesque orthographickal impertinence (something I’d soitainly endorse, stooge and butt of that circus I be)? Where’s the “waveforms” in that? I recall high modernist Mark Twain’s “Explanatory” note insert’d at the beginning of The Adventures of Huckleberry Finn (1884), its gentle mockery of the art of transcribing dialect in order to feign authenticity. Twain:

In this book a number of dialects are used, to wit: the Missouri negro dialect; the extremest form of the backwoods Southwestern dialect; the ordinary “Pike County” dialect; and four modified varieties of this last. The shadings have not been done in a haphazard fashion, or by guesswork; but painstakingly, and with the trustworthy guidance and support of personal familiarity with these several forms of speech.
I make this explanation for the reason that without it many readers would suppose that all these characters were trying to talk alike and not succeeding. 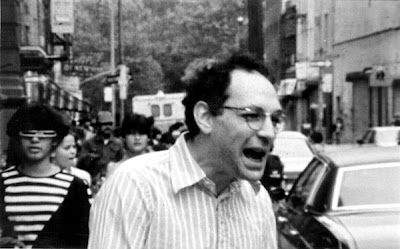