CCCXLII
My sulky gaps
and verges, my
pshaw-talker’s routine,
speed and its
unclarify’d demands. How
imbecilic to write
to a tempo
of days, weathering
it out. Exemplary
gradient for sub-
intelligibility domain hacks
into the heorte,
my minna, my
burthen, simply shclichtweg
I find it.
Durst I recall
green fiery days
trembling and big
with the mute
shouldering earth, its
impatient ordinary hurl
of death-fecund
love and omen?
A barn swallow
cut inscrutable lines
in the air
behind the mower
and my upturn’d
mouth pour’d out
my amass’d love-
scraps and borrow’d
curses, fodder for
the noise of
a small gas
engine. I cannot
make it cohere
the way days
select’d knock-kneed
and awkward out
of that era
cohere, with my
lines out of
books making what
I said bookish,
mistook for ambivalent.
I loved you
like a Brahmin,
like a patsy,
like a cloak.

Certes. The odd noise outs. Remy de Gourmont writes: “Le fond engendre la forme comme la tortue ou l’huître l’écaille et la nacre de sa carapace ou de sa coquille.” I find that in Alice Steiner Amdur’s 1936 book, The Poetry of Ezra Pound. She’s saying T. E. Hulme, who “knew Gourmont thoroughly,” likely (early, pre-1912, when Pound “started to read the modern French writers . . . with strictly practical intentions”) provided Pound with the fond of the thing, so that he mimicks it in the Cavalcanti (“the rhythm of any poetic line corresponds to emotion. It is the poet’s business that this correspondence be exact, i.e. that it be the emotion which surrounds the thought expressed”—like the shell of a turtle, supposedly.) A little farfetch’d: to make the burst wienie (to ditch the zoological metaphor) of thinking be cosset’d by the bun of feeling—that “system”—derive out of what is an argument for form’s being engender’d by what I’d call “content” (le fond: ground, fundament, stock, &c.) (There is, too, a French jeu de mot—“le fond et la forme”—that makes style itself substance.) (I drill myself noticeably deeper.) What perk’d me up in reading the de Gourmont: how it is (avant la lettre) Creeley’s “Form is never more than an extension of content” that Olson made such hoopla about. Rife the idea pre-Creeley, isn’t it? Why the hoopla?

Alice Steiner Amdur’s book preceded Hugh Kenner’s The Poetry of Ezra Pound by fifteen years. Print’d by Harvard University Press (edition of three hundred), part of a series of “Radcliffe Honors Theses in English.” (In the parallel “Harvard Honors Theses in English” one notes Meyer H. Abrams’s The Milk of Paradise.) Amdur writes that Pound “first appealed to me as a challenge”: “I could not reconcile the apparent confusion and meaninglessness of the Cantos [only A Draft of XXX Cantos and Eleven New Cantos, XXXI-XLI had appear’d] with the fact that it is impossible to keep Pound’s name out of any discussion of modern poetry.” (Chalk one up for boisterous beyond-poetical rabble-rousing and self-advertisement.) Amdur, in a somewhat uncanny (unintend’d) prognosticatory maneuvre, writes: “Surprised at first by the disparity between his exquisite early lyrics and the turbulent cantos, I now feel that they do cohere.” Too, she foresees a counter-strain in Pound criticism, marking the Pound’s “story” as that of “a man with an extraordinary flair for language and music who, after achieving mastery in a certain type of lyric and translation, deserted the field of pure art to campaign for a variety of other causes, and . . . buried his poetry beneath an ever growing mass of propaganda.”

Pound apparently read the book, enough to write a scathing reply to William Carlos Williams (who’d sent him a copy):

Thanks for Amdur’s (or Ham dure’s) thesis volumet, which ought to be entitled
“Old Ez carried into Jerusalem on the Foal of an ass.”
“The custom now is” said Dr Johnson “to use colt for a young horse and foal
for a young mare.”
Booklet illustrates
American time lag /
conceit and snobism of Am/ Universities.
fixed ideas instilled into jejune stewddents, snobish omission of all
ref / to W. C. Williams
AND bloody distortion and misrepresentation of London LIFE 1908 to 1914.
Hell, Yeats for symbolism; Hueffer for CLARITY / half dozen drawing rooms
wherein no whisper of one cenacle arrived.
The main injustice is to Ford / 2nd is to you.
But if they must blither about Flint / Tancred and Stroer it is is unjust to
OMIT Ernest Rhys, Newbolt, Hewlett, Robt. Bridges
who at any rate WROTE something now and again, and however much one
disagreed with ’em, one was at least disagreeing with something.
Nuissance to know whether one ought to publish rectification.
Using steam roller on monkey nut?
job MIGHT be done by reviewers or by some other PH D of Amdur’s own size.
Usual time lag / ANYTHING new is wrong / anything the professoriate hasn’t.
yet learned is considered foolish.
There is ONE bit of real criticism / wonder if it is author’s own or a current bit
of collegiate class room opinion / also two useful quotes from I forget whom.
Than Q fer sending it.
fillet of filly, ces jeunes filles or as Natalie sez: feminine of ecrivain: ecrivisse.

Frightening how quick the paranoid’s ”they” enters in (“if they must blither”). Oddly enough, Pound did do a “rectification” of sorts in the form of a six-page letter to Amdur herself. It is dated one day before the letter to Williams, and print’d in Paideuma (21: 1 & 2). A sprinkling: “Flint is and was an ASS.” “As to Flint / do realize that WHEN people understand NOTHING that is said to them one does NOT contribute to their mental growth. Besides he is a soreheaded pup who didn’t make the grade.” “Hulme’s scattered notes were PRINTED post mortem. He was not an ass, but neither did he predominate etc / etc / there were other [rooms] and in particular ONE other room where men even then spoke of WRITING. Unless you and yr / unspeakable beanery are interested in FACT, I will leave you to find out WHERE.” (Hints, here too, amidst all the turf-claiming, of the “power-silence,” a way to fortify one against any perceived as being beyond the ken.) Amdur seems to’ve work’d as an editor for MIT Press for a number of years, and died in the late ’eighties. 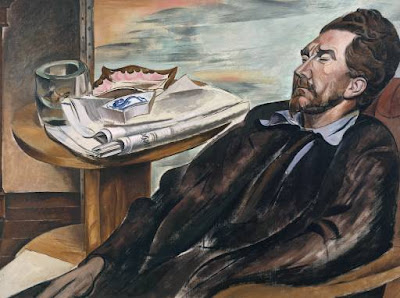