CCCXLV
The sentence is one of
several necessary and heterogeneous vehicles
of a peculiar means of
thinking oneself into regions heretofore
abscond’d by wit, look’d at
asquint by syntax, or declined by
the plotz’d evidential roisterers of
the physical world. Its periodic
momentum abjures rhythm and regularity
and bolsters, clausal or adjectival,
plump’d up under its skinny
length get add’d at whim,
or subtract’d in a misconstrued
fit of convenience and regimen,
some word needing a propping
up somewhere down the line.
The dog’s barking is likely
a sign of an unspecify’d
desire, though it sounds like
“owph, owph, owph” carrying through
the Plexiglas storm door. It
is the helve and blade
of the unrearranged order of
things that the sentence attempts
both to eruct and accommodate
like a prairie warbler up
in a scrubby early-growth
pine plugging the variously pitch’d
holes it’s made by singing
with the unslung pierce-cheeriness
of its dub-modicum song.

Paw’d through a copy of James Wright’s Collected Prose and found a piece he’d written about the “inadvertently neglected” David Schubert—apparently (he writes to Theodore Weiss) the piece “served as the introduction to [Wright’s] reading of a number of” Schubert poems. Wright quotes the full (and heartbreaking) statement Schubert wrote to introduce the 1941 collection The Simple Scale (included in a New Directions volume call’d Five Young American Poets with poets Paul Goodman, Jeanne McGahey, Clark Mills, and Karl Shapiro). Schubert:

A poet who observes his own poetry ends up, in spite of it, by finding nothing to observe, just as a man who pays too much attention to the way he walks, finds his legs walking off from under him. Nevertheless, poets must sometimes look at themselves in order to remember what they are risking. What I see as poetry is a sample of the human scene, its incurable acute melancholia redeemed only by affection. This sample of endurance is innocent and gay: the music of the vowel and consonant is the happy-go-lucky echo of time itself. Without this music there is simply no poem. It borrows further gayety by contrast with the burden it carries—for this exquisite lilt, this dance of sound, must be married to a responsible intelligence before there can occur the poem. Naturally, they are one: meanings and music, metaphor and thought. In the course of poetry’s career, perhaps new awarenesses are discovered, really new awarenesses and not verbal combinations brought together in any old way. This rather unimportant novelty is sometimes a play of possibility and sometimes a genuinely new insight: like Tristram Shandy, they add something to this Fragment of Life.

“A sample of the human scene, its incurable acute melancholia redeemed only by affection”—how rare that impulse today! (I love that “sample of the human,” seemingly a rebuttal avant la lettre of the know-nothing crass futility of today’s sampling.) Wright wrote the piece about Schubert in 1978. At that moment, only Five Young American Poets and Schubert’s book call’d Initial A (Macmillan, 1961—publish’d in a series edit’d by M. L. Rosenthal, he who term’d Lowell “confessional”) exist’d. Theodore and Renée Weiss, unsung heroes of the eclectic Quarterly Review of Literature print’d Schubert’s Works and Days, a kind of chrestomathy of Schubertiana, with poems and translations (Baudelaire), snippets of letters and recollectings interspliced into what’s label’d a “multi-auto-biography,” and critical pieces, in 1983. (Schubert, born in 1913, died in 1946 of tuberculosis.)

What “took” me in reading the Wright piece—I recall’d that John Ashbery, he, too, ’d touted Schubert. (The final chapter in Other Traditions is titled “David Schubert ‘This Is the Book That No One Knows’” and I sought to recall some earlier, shorter statement.) Here, too, evidence of a commingling of traditions, of a détente in what some (repeatedly) perceive as endless lineage-warring—if only over the poor deceased body of David Schubert. Turns out the Ashbery statement (located in the Selected Prose) is writ in 1983 for the Works and Days collection. Ashbery notes how he “first encountered David Schubert’s work in the early 1940s, when I was in high school and trying to find out as much as I could about contemporary poetry. This included reading the annual Oscar Williams anthologies and as many little magazines as I could lay my hands on in rural upstate New York.” Of Initial A (odd, that echo of Zukofsky, though apparently Weiss, not Schubert, supply’d the title), Ashbery, recounting how he “picked up a paperback copy . . . marked down to 75 cents from its original price of $1.50” in the ’sixties, says:

For me it’s one of those books that poets keep for themselves, to remind them of what poetry can be when the writing isn’t going well and one feels out of touch with the possibilities of poetry. To sit down for a little while and reread some of Schubert’s rare and poignant verse is like opening a window in a room that had become stuffy without one’s realizing it.

(In Other Traditions Ashbery reports how he subsequently “writing about Schubert, almost by chance . . . came across a letter from William Carlos Williams to Theodore Weiss which was not included in the Schubert memorial volume [Works and Days]. Williams wrote,

Many thanks for the Schubert poems, they are first rate—more than that, far more. They are among the few poems I read that belong in the new anthology—where neither Eliot nor, I am afraid, Pound belong. I wish I could get up that anthology where the rails are polished silver they are so clear in the sunlight I should provide. There is, you know, a physically new poetry which almost no one as yet has sensed. Schubert is a nova in that sky. I hope I am not using hyperbole to excess. You know how it is when someone opens a window on a stuffy room.

Amazing. Later—a lovely thing—Ashbery’s tender fret about the fugitive and tenuous (“It shores up my feeling that the poets . . . who become known and are remembered and put in anthologies are there as much from happenstance as intrinsic merit”) nature of a poet’s work:

. . . poetry is a somewhat neglected art to begin with; it has trouble making its way in the best of circumstances, and there are not too many judges monitoring the situation to make sure each one gets what he or she deserves. Poems get lost more easily than paintings do; even their authors tend to forget them in drawers or sometimes destroy them in a fit of rage, as Schubert in fact did with a large body of his work, including a novel whose first sentence alone survives: “Outside it was Tuesday.”

(Rather like the Guatamalan Augusto Monterroso’s notoriously short story call’d “El Dinosaurio.” It reads in its entirety: Cuando despertó, el dinosaurio todavía estaba allí. “When he awoke, the dinosaur was still there.”) Here’s a Schubert:

Farewell, O zinnias, tall as teetotalers,
And thou, proud petunias, pastel windows of joy,
Also to you, noble tree trunks, by name
Elm, with your dark bark in the dark rain, couchant
Like comfortable elephants. And you
Mailbox colored robin’s egg blue on the poor
House, shy, set back (a poor gentleman but
Irreproachable), with your shutters robin’s egg
Green. You, street, striated with rain like a new penny,
And houses planted by arbor-vitae trees,
By miniature pines that lean against you for
Support—Hail and farewell!

And I, outside in the rain, look inside
These elms whose branches tip and touch
The slant roof, slain by the four fireplaces
Where life, slowly, life is conventional
In a sheer seersucker dress, with blue eyes,
A red ribbon in her pale hair, eats a sundae,
Glances at the young man.

O city whose lives
Gather their accumulation of days
Carefully as well-kept lawns.

Past the proud apartment
Houses, fat as a fat money bag. I wish that I
Might stay in this pleasant, conventional
City, as I study a sturdy clover
Bent back by a dewdrop of rain. But then
From the corner of a mood like Les Sylphides,
Impossible, romantic as certain moons
In certain atmospheres, then you called me
From the corner of the street. And,
Like buttercups, like invitations: I

“Best of all—an aviator on a fire net.”
I am Gabriel (dressed in corduroy) am
not listed in the Manhattan phone directory
but am in Edwin Denby’s New York cycle
of poems
we live here in the falling
plaster and get this way that way
going to Gorky shows and looking at
“ink and chalk forms” all the time it is
simpler to be by the sea or in a boat
then you can jump
in
I miss you
but I never knew you anyway so there
you are or do I know you better than I
would have at 42nd Street and 8th Avenue

All a messy (and highly incompleat) way of saying (particularly to the purveyors of simplify’d and simple-mind’d) “history” made of categorical toots, it ain’t so simple. (O’Hara’s “round” in the final stanza one a better, complicatedly apt, sunning out of how lineage “goes,” and knightly.) 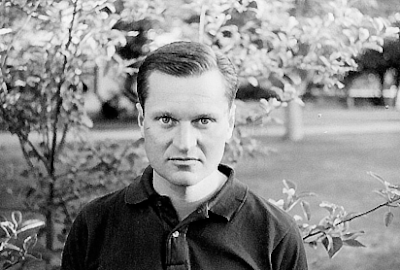