CCCLV
Fatal is my uncanny
engine like that of
any of the slow-
draw super-apes who
form copulatory swarms high
up in the air,
and go at it
with antic haywire irregularity
up to the point
of the new-sprout’d
wings dropping off, sailing
effortlessly down to earth
like the petiole-shrivel’d
leaves of any autumnal
sport. Now it is
winter. The large symmetrical
expansions of the body
diminish and commit. Ground’d
ape-tedium exordiums commence
in the formicary fever-
dens. In a shallow
batch of magnify’d pond
water a smallish copepod
spins like something electro-
magnetic, and a hydra,
salt’d by a boy
biologist, explodes into ass-
galaxy nothingness. The north
star dips low behind
a hill and I
walk straight west out
into the acrobatickal protozoan
soup: a way of
keeping the humanoid monotone
down by shouting like
an animalcule, Leeuwenhoek! Leeuwenhoek!

A sloth-weekend, albeit peripatetic. Which’d “fit” the “requirements” (none, beyond a certain instep-crush’d insect sonic militance and “gush”) of an opening line of one a several “missing” numéros of “A Year.” (Figures that at the point of its rip-snorter of a concluding—“thud shut of a Webster’s”—the boîte-cerveau ought be so butter’d and muttering, loathe to engineer the thing compleat.) In the brave stray beams of cold sunlight un-occluded by capital’s apes struck by tyranny-bouts of shopping (boue de la saison), I sang through some of Pound / Williams: Selected Letters of Ezra Pound and William Carlos Williams (New Directions, 1996), edit’d by Hugh Witemeyer. Things to love: lines out of the “Prologue”—whence Silliman’s original opening to “The New Sentence” (Williams: “The sole precedent I can find for the broken style of my prologue is Longinus on the Sublime and that one far-fetched.” Silliman: “The sole precedent I can find for the new sentence is Kora in Hell: Improvisations and that one far-fetched.”) to WCW’s Kora in Hell: Improvisations (1920) against the smug knowing (signpost’d) conventionality of the city, here, Pound’s London: “I praise those who have the wit and courage, and the conventionality to go direct toward their vision of perfection in an objective world where the signposts are clearly marked . . . But confine them in hell for their paretic assumption that there is no alternative but their own groove.” Excellent the diagnosis of city-provincial paralysis with usual attendant symptoms of gawker-style fame-calibrating. What’s of use: the private formal push. WCW to “Liebes Ezrachen” (1922): “Just finished Ulysses. I am satisfied to put it away for the moment. Yes, I’ll risk one comment: It encourages me to champion my own particular form of stupidity—or knowledge or intelligence or lackknowledge. It is the first of the return from the desert.” And later, même feuille: “I have always wanted a book of prose things, some place to appear without the necessity of assenting to the editorial nod of some lunar sheet’s boss.” How Williams ’d’ve “took” to the sweet unattend’d attenuations of blogging, ripping out memos unfetter’d between patients!

Need’d reminders of Pound’s limits in calling “winners” in the form of retrospect-duds like “expatriate American poet”—and Pound protégé—“Ralph Cheever Dunning (1878-1930).” Out of Witemeyer’s notes:

Thirteen poems by Dunning appeared in Poetry for April 1925 under the general title “The Four Winds.” EP’s essay on “Mr. Dunning’s Poetry” was published in Poetry for September 1925, and Dunning was awarded Poetry’s Helen Haire Nevinson Prize. In an undated letter to WCW, EP asks, “Wotcher think of the Dunning that you have seen? And are you ready to look thru whole mss. Pussnly I think that inability to find something in a poem like Cheever’s ‘Shadows’ shows distinct limitation. Inability to get past the language and to the meaning.”

In A Moveable Feast, Hemingway calls Dunning “a poet who smoked opium and forgot to eat.” “When he was smoking too much he could only drink milk and he wrote in terza rima which endeared him to Ezra who also found fine qualities in his poetry.” At one point, prior to Pound’s leaving Paris for Rapallo, he provides Hemingway with a “large cold-cream jar” full of raw opium, and tells him “give it to Dunning only when he needs it”—“Ezra had brought from an Indian chief he said, on the avenue de l’Opéra . . .” And Williams’s nail’d down wry reply:

To me it seems that Dunning has proven, by a route none of the others of us has taken, that it is still impossible to write work of first excellence in a demoded form. We abandoned the form, he used it well. He used it superlatively well and now, by his excellence, proves the failure. He could have proved nothing by sloppy work. After reading him I still find the form he uses so well, intolerable. It accords, however, with his stale content: AN EXCELLENCE.
Thus the quandary increases, for the thing nobody can decide is, what excellence in most excellent. Should he be most admired who adds most to the means of expression with his art or should he be admired who shows that there is no need for additions.

And, noting rather sardonically how Dunning’s is “the old thrill of excellent craftsmanship,” WCW suggests that “here is an excellent fellow with nothing much to say who by dint of fine perception, hard work and great patience has after long hours hit upon the one dead mode which fits him. Doing this over and over he has come at last to the distinction of making something precious which fits all the rules of fine practice in his art without stretching them or caring to know where they may be departed from or amended.” Which is the sopping excellence, too, of “our” truculently know-nothing era with its mimick modernisms, and its pre-decreed readings Poundesque. (Here’s Williams complaining about Pound’s smudging of everything into whatever the current categorical itch be: “All I ever asked, even of you, is that you SEE me and not through glasses guaranteed and specially fabricated to miscolor and distort everything they come against. I do object to that. Look if you have any eyes at all—and forget for a moment what happens to be itching you at the time. It may for a moment permit you to get a little pleasure without aching to make me something that I ain’t.” Williams, out of that “Prologue”:

The imagination goes from one thing to another. Given many things of nearly totally divergent natures but possessing one-thousandth part of a quality in common, provided that be new, distinguished, these things belong in an imaginative category and not in a gross natural array. To me this is the gist of the whole matter. . . . But the thing that stands eternally in the way of really good writing is always one: the virtual impossibility of lifting to the imagination those things which lie under the direct scrutiny of the senses, close to the nose. . . . The senses witnessing what is immediately before them in detail see a finality which they cling to in despair, not knowing which way to turn. Thus the so-called natural or scientific array becomes fixed, the walking devil of modern life. He who even nicks the solidity of this apparition does a piece of work superior to that of Hercules when he cleaned the Augean stables.

My argument is that that going “from one thing to another” is less sequential than relative. Not the surface array of sentence after sentence, detail after detail, but a series of relations (one thing carry’d over by dint of that “one-thousandth part of a quality in common” to the next). 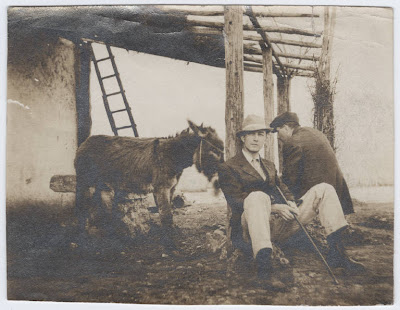