Virgil Thomson and the State of Poetry 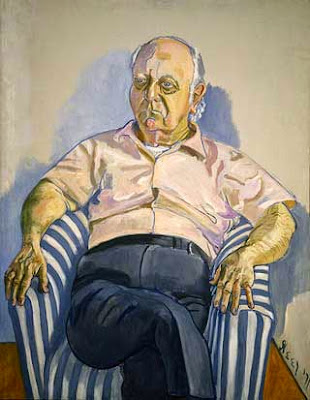 Something to put under the “plus ça change, plus c’est la même chose” rubric. Out of Virgil Thomson’s The State of Music (1939):

Poetry is the oldest of the arts and the most respected. The musical tradition we practice has scarcely a thousand years. Architecture, sculpture, and decorative design have passed since ancient times through so many esthetic revolutions that very little is left in them of any authoritative tradition. Improvisational one-man easel-painting in oil (painting as we know it) dates barely from the seventeenth century.
Poetry, as we know it, goes straight back to the Greeks and to the Hebrew children. There has been no interruption for twenty-five hundred years in the transmission of its technical procedures, no hiatus in the continuity of its comprehension by the literate classes of Europe. It has survived changes in religion, political revolutions, the birth and death of languages. Its classic masters enjoy a prestige scarcely exceeded by that of the Holy Evangelists. By populace and scholars alike they are admired above confessors and martyrs, priests, prophets, historians, psychologists, romancers, and ethical guides, and far above statesmen or soldiers, orators or newshawks. For they and their heirs are the recognized masters of the most puissant of all instruments, the word.
The poetic prestige remains, but the poetic function has contracted. As champions of the arts of love, poets made war for centuries on the Christian Church and won. As analysts of its motivations and as experts of amorous device, they were the undisputed masters of that subject till Sigmund Freud, a nerve doctor, beat them at it in our own day. (Karl Marx, a nineteenth-century economist, had already beaten them at social analysis and at political prophecy.) With love now the specialty (in every aspect) of the medical profession, with government (both past and future) better understood by sectarian political groups and better explained by journalists, with dramaturgy better practiced in Hollywood and Joinville, and story-telling done more convincingly by the writers of police- fiction, what is there left for the poet to do that might even partially justify his hereditary prestige?
He could retreat into “pure” poetry, of course; and he often tries to. Much good may it do him. Because the sorry truth is there is no such refuge. In recent years the poets have talked a good deal about “purity.” I am not sure what they mean by “pure” poetry, unless they mean poetry without a subject-matter; and that means exactly nothing.
Music and painting can exist perfectly well without a subject-matter, at least without any obvious or stated subject-matter. Painting of this kind is called “abstract.” Musicians used to distinguish between “program” music and “absolute” music. The latter term meant music without a literary text or any specific illustrative intention, that is to say, instrumental music of an introspective nature. Neither “abstract” painting nor “absolute” music is any “purer” than any other kind of painting or music, and no painter or musician ever pretends it is. It is merely more obscure. When painters speak of “purity of line,” they mean a complete lack of obscurity. When they speak of a “pure” color, they mean a shade that is unequivocal. Say an artist’s intentions are “pure,” if you must. That means he is not commercial-minded. The word pure cannot possibly have any meaning when applied to the content or structure of literature. Poetry could be pure only if it could be devoid of meaning, which it can’t. You can make nonsense poetry, certainly; you can dissociate and reassociate words. But you cannot take the meanings out of words; you simply can’t. You can only readjust their order. And nobody can or ever does write poetry without a subject.
What subjects, then, are available to the poet today? Practically none. Money, political events, heroism, science, mathematical logic, crime, the libido, the sexual variations, the limits of personality, the theory of revolution: the incidents of all these are more graphically recited by journalists, the principles better explained by specialists. There really isn’t much left for the heirs of Homer and Shakespeare to do but to add their case-histories to the documentation of introspective psychology by the practice of automatic writing. Highly trained in linguistics (though the philologists are not bad at that either) and wearing the mantle of the Great Tradition, admired unreasonably and feared not unreasonably (for they are desperate men), they still have, as poets, no civil status, no social function, no serious job to do, and no income.
They haven’t even any audience to speak of. For some time now they have been depending mainly on one another for applause. Hence the pretentiousness and the high intellectual tone of all they write. I mean that for fifty years poetry has mostly been read by other poets, and that for a good thirty years now has mostly been written to be read by other poets.
The impasse is complete. Contemporary civilization has no place for the poet save one of mere honor. Science, learning, journalism, fiction, religion, magic, and politics, all his ancient bailiwicks, are closed to him formally and completely. He is allowed to render small services to these now and then as a disseminator of existing knowledge. He is always regarded, however, by the specialists as a possible betrayer; and consequently at no time is he allowed to speak of such subjects with any but a temporarily delegated authority.
His lot is a tragic one. Nothing is left him of his art but an epigone’s skill and some hereditary prestige. This last is still large enough to give him face in front of his co-citizens and to keep up the recruiting. It doesn’t pay anything at all, of course. It won’t buy a beer, a bus-fare, or a contraceptive. Nor does it prevent the darkest despair from seizing him when he is alone.