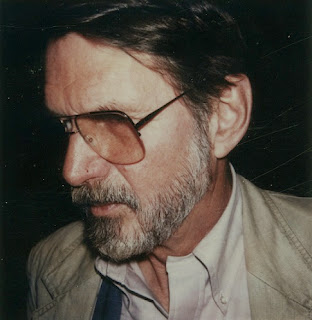 Prompted by Creeley’s ferocity in reacting to Hugh Kenner’s The Poetry of Ezra Pound (1951)—see the “April 18th, 1951” letter addressed to Denise Levertov and Mitchell Goodman in the Selected Letters—

Read Kenner’s damn bk/—THAT is horrible. Christly pompous style he’s got: “When the widow of Ernest Fenollosa perceived that the poet of Lustra was ideally fitted to work into articulated forms, etc., etc., etc.” Very hard to even get THRU that one—incidentally, it continues (on the book-page) for five more lines. Ending, “ . . . of penetrating an utterly alien poetic method from which unworn procedures and formulations might be drawn . . . ” O/ utterly!

—I took a look at the Kenner. Usual Kenneresque fulsome narrativity (recall the masterly opening salvo of The Pound Era, twenty years later: “Toward the evening of a gone world, the light of its last summer pouring into a Chelsea street found and suffused the red waistcoast of Henry James, lord of decorum, en promenade, exposing his Boston niece to the tone of things.” A sentence the impeccable stylist Guy Davenport’d cotton, indubitably, to—indeed, it could well commence a Davenport récit . . .) Here’s Kenner’s opening to the “Cathay” chapter:

When the widow of Ernest Fenollosa perceived that the poet of Lustra was ideally fitted to work into articulated form the notes and cribs on certain early Chinese poems assembled by her husband, Pound for the first time had the opportunity at once of consolidating his new modes of poetic speech and of penetrating an utterly alien poetic method from which unworn procedures and formulations might be drawn. The importance of Fenollosa essay on the Chinese Written Character needs no emphasis. The technical importance of the Cathay translations, in preparing for the Cantos, probably still deserves a page or two.*

“Probably still deserves a page or two.” Out of the “Christly pompous” and into the incidental, the casual, the off the cuff. Creeley seemingly apt to miss the range of the proceedings. I recall here remarks Frank O’Hara makes—talking with Edward Lucie-Smith in a 1965 interview reprinted in Standing Still and Walking in New York. O’Hara’s talking about the range of new American poetries, and puts the pleasures of a kind of maximalist barrage up against a pointedly countering impetus, that of a paring down, and a need for “control”. O’Hara:

It’s, you know, the sort of tumultuous outpouring of images which then get themselves together into being a poem, somehow. But you do have the excitement of seeing whether you’re really going to get it to be a poem or not. You know, or is it just going to be a . . . But of course with the influence of Levertov and Creeley you have another element which is making control practically the subject matter of the poem. That is your control of language, your control of the experiences and your control of your thought. . . . It is amazing that Creeley puts as many vowels in as Levertov, and the amazing thing is that where they’ve pared down the diction so that the experience presumably will come through as strongly as possible, it’s the experience of their paring it down that comes through more strongly and not the experience that is the subject . . .

And isn’t Creeley’s complaint with Kenner one, finally, of diction? “O/ utterly!”

* In The Pound Era Kenner ties Mary Fenollosa’s choosing of Pound for the “notes and cribs” to Pound’s “In a Station of the Metro”:

—two lines, five phases of perception. Later typesetters, thinking this queer, have closed up the spaces. There is no indication that he was thinking of Chinese characters when he grouped sensations that way, but he was clearly ready for the gift Mary Fenollosa made him during that year, prompted, it appears, by the command of idiom displayed in that poem and in 11 others of the Contemporania group in the April 1913 Poetry.

The pages of material, Kenner notes, “demanded not an editor but a poet.” “Fenollosa himself had written that ‘the purpose of poetical translation is the poetry, not the verbal definitions in dictionaries.’”