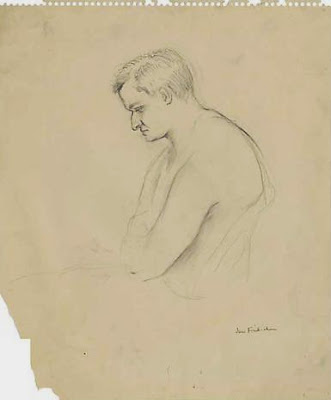 Merely to gather a few things pulled out of readings (“join’d / In soft Assemblage”). All seemingly bucking the astringency of the prepossessed, the way “intent” is a baffle, a check and discomfiture. There’s Jane Freilicher, in an interview: “I might plunk down a number of vases, or some flowers, or some stuff, in a window, and add the window. I sketch around it, not really knowing what’s going to happen. At a certain point, I have an idea, and then I have to resolve it. Sometimes the resolution is bumpy. It’s sort of like moving furniture in a room where you think you have it and then you find it’s all wrong.” And James Schuyler, out of a 1966 essay, “The Painting of Jane Freilicher”: “Structure is an improvisation, composed as painted, not a skeleton to be fleshed out.” (Note, too, Schuyler’s wonderful reference therein to “the unexpectedness of nature, where the right place for a thing is where you find it.”) Too, there’s John Ashbery, in a piece collected in Reported Sightings: Art Chronicles, 1957-1987 (1989), recalling Freilicher’s early paintings: “. . . they seemed to accommodate both geometry and Expressionist surges, and they struck me at first as tentative, a quality I have since come to admire and consider one of her strengths, having concluded that most good things are tentative, or should be if they aren’t.” My love of the interrupted, the unfinished, the barely apprehended.

Out of The Selected Letters of Robert Creeley (2014), in a letter to Mitchell Goodman dated “October 3, 1951” (Creeley’s just quoted Fenollosa’s “The Chinese Written Character as a Medium for Poetry”—“A true noun, an isolated thing, does not exist in nature. Things are only the terminal points, or rather the meeting points, of actions, cross-sections cut through actions, snap-shots. Neither can a pure verb, an abstract motion, be possible in nature. The eye sees noun and verb as one: things in motion, motion in things . . .”):

Novel: all possible digression (I still feel that); all possible sequence from a to b to c. The whole problem of: sequence—is there ever any use in trying to deny anything that does happen in the actual writing, i.e., if one thing does ride in upon another, even though we have intended something else, what can we do by forcing, or what can we do but follow?   Which is the old song, etc.

The thing: to hinge oneself by a ‘plan’, an intention flexible enough to allow oneself growth in the act; i.e., the embarrassment of change, of how one does change, can’t help it, etc.

And yet, can’t write ‘all out doors’, etc. Have to begin, etc. The question seems to continue: how? But only to, begin—i.e., the 1st word, right or wrong, gets that out of the way?

Two problems: 1) to be able to follow the depth, the actual plunge of any perception (any thing coming to find its own character, in yourself), to be able to get down to that depth, somehow, to make it straight dive;

Creeley’s “broken-field running” against Freilicher’s “bumpy” resolution. The tonal differences between the two—each positing an essentially like “stance”—is astounding. Creeley to Larry Eigner (“[undated, 1951]”): “Experience is Extension, is the grip, or so one might hope, on RELATION. The reach of a man’s experience comes to his apprehension of the RELATIONS (the what happens between himself, objects, himself AS object) posited by the ‘happening’ of experience.” One senses something rather antithetically inviolable and unyielding in the clench of Creeley’s commitment to “what happens.” (Oppose, for a moment, marking, mayhap, a difference between Black Mountain and New York School Ashbery’s version of such “mastery”—out of “The System”: “It is with some playfulness that we actually sit down to the business of mastering the many pauses and the abrupt, sharp accretions of regular being in the clotted sphere of today’s activities. As though this were just any old day. There is no need for setting out, to advertise one’s destination. All the facts are here and it remains only to use them in the right combination, but that building will be the size of today, the rooms habitable and leading into one another in a lasting sequence, eternal and of the greatest timeliness. . . .”)
Posted by John Latta at 6:12 AM