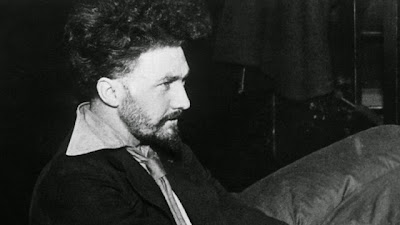 Out, Saturday morning, under irregular sun, to what the county maps call Watkins Lake, a lake bisected (or pierced) by a narrow dirt road: locals call it Thorn Lake. Cold—mid-twenties—with a skiff of snow. Waterfowl (“Water foules haue bytwene theyr toes and clawes as it were a skynne . . .”): hooded mergansers, gadwalls, canvasbacks, and hundreds of ruddy ducks, tails aslant. The usual vociferous Canada geese. Four snow geese tending to the outskirts. Coots un peu partout. Driving out, stopped at the farm pond off Schneider Road: a single American kestrel doing its manœuvres washed by sunlight the color of turpentine. Rust and slate, ineffable rust and slate. Tromped the Leonard Preserve through the increasingly cloud-blotted day: a conniption of eastern bluebirds, a solitary red-headed woodpecker, a broken file of deer moving like spooks through the snow-scrimmed red pines.

Bumping around Pound again, Pound the inexhaustible. Something out of “Mr Housman at Little Bethel,” c. 1934:

I am unqualified to speak of exalted sentiment, but I should say no idea worth carrying in the mind from one year’s end to another, and no story really good enough to make me at least want to tell it, but chafes at the flatness of prose, but suffers from inadequate statement, but leaves me feeling it is but half said, or said in abstraction, defined in terms so elastic that any god’s ape can stretch its definition to meet his own squalor or to fit his own imbecility, until it be conjoined with music, or at least given rhythmic definition even though one do not arrive at defining its tonal articulation.

“Conjoined with music.” Meaning caught by the throat. Verbiage bit into rhythmic chunks, to sap the usual slurry mayhem, to make distinct a structure. (Pound, reviewing the pianist Arthur Rubinstein in 1920, notes approvingly: “a solidity of rhythm, the whole like a set of taut steel cables whirling, seizing and holding the auditor; a barbaric noise, splendidly structural . . .”) Or think of Pound’s line in “Music and Brains” (1936): “I have heard Yeats read poems that had no rhythm of their own, poems that had no more metric force and validity than you can find in a mashed potato, and by imposing a rhythm of his own on the formless verbiage, give it a transient and passing life.” Out of the 1917 note “Vers Libre and Arnold Dolmetsch”:

Poetry is a composition of words set to music. Most other definitions of it are indefensible, or metaphysical. The proportion or quality of the music may, and does, vary; but poetry withers and “dries out” when it leaves music, or at least an imagined music, too far behind it. . . .
Poets who are not interested in music are, or become, bad poets. I would almost say that poets should never be too long out of touch with musicians. Poets who will not study music are defective. I do not mean that they need become virtuosi, or that they need necessarily undergo the musical curriculum of their time. It is perhaps their value that they can be a little refractory and heretical, for all arts tend to decline into the stereotype; and at all times the mediocre tend or try, semi-consciously or unconsciously, to obscure the fact that the day's fashion is not the immutable.

Tonic against a gone sedulousness, a former (supposed) diligence of making (now) corrupted. (“A body may be fordoo and corrupted, for hit is i-made of contrarie þinges.”)
Posted by John Latta at 7:58 AM