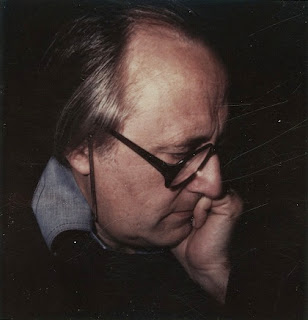 Reading Roy Fisher’s entirely captivating (and seemingly effortless) prose. Collected in the Peter Robinson-edited An Easily Bewildered Child: Occasional Prose 1963-2013 (Shearsman, 2014). Fisher’s wry and slightly diffident voice there in that terrific opening line (out of a 2012 piece called “Meanwhile”): “An easily bewildered child, I nevertheless had no problem in hanging on to the idea that sewn like a lining inside the customary world there was another with tones and imperatives of its own.” The piece includes a fine appreciation of Gael Turnbull, who included Fisher’s work in a British number of Cid Corman’s Origin (and whose Migrant Press published Fisher’s first pamphlet, the 1961 City):

He opened things up and licensed me to go on writing. Trying to characterize the unique nature of his presence in the poetry scene I’m reminded of the stratified social system of Imperial Japan, where the rigid levels of aristocracy and peasantry held sandwiched between them the Floating World of administrators, artists and the like who had fewer obligations and more freedom. Having virtually no contact with the poetry establishment (particularly in England, though America and eventually his native Scotland found him easier to value) and instinctively staying clear of the activities of self-congratulatory but incurious amateurism, he could roam free in the floating world of little magazines and quixotic publications. He had a nose for what he considered honest work and had no preconceptions about where to go looking for it. He distrusted anything smooth, slick or subsidised: his predilection for issuing tiny editions, mostly of his own work, in booklets hand-sewn with covers of wallpaper offcuts, the texts on the poorest quality paper and made with obsolete basic technology, was proverbial.

In the longer “Antebiography” Fisher details the consequences of being included in the British Origin number (“I was no Black Mountain poet; I was just another muffled English provincial eccentric. But I was certainly well outside the neat, socially orientated orthodox poetic, which had neither appeal nor meaning for me. I couldn’t even mimic it . . .”) and meeting Turnbull in 1956, who acquaints him with the work of the burgeoning New American Poetry:

I went home and tackled my writing from a new direction. I had already on occasion used chance operations to begin poems I didn’t think important; now I used such methods extensively—usually short phrases picked at random . . . The main effect of the method was to get me out of my own way. This was very necessary. I’d grown up with no trace of the compact self which most other people seemed to have; instead I had a diffused zone in which ad hoc selves would be generated for temporary purposes, and then dissolve again. Establishing a usable, consistent self was later to prove a lengthy business, like growing a windbreak. The self I’d tried in those days to fix as a writing persona was just a kind of self-important bruise, a posture. It got in the way, and didn’t ring true. Once rid of it, though, I could get at observations, memories, earlier selves, lost feelings, casual things—reality, in short—and my clotted language cleared like a cloudy liquid left to settle.

Brilliance in the offhand (and funny) metaphors: “like growing a windbreak.” The too-earnest (whatever’s too weighty, grave, or momentous) thus kept at bay, relegating the self and its endless tutorials to something akin to a home-improvement project. Pertinent, too, some lines out of Fisher’s “Poet on Writing” (originally written for the 1992 Denise Riley-edited Poets on Writing: Britain, 1970-1991):

I’m either writing—physically making a creature of blackish marks on whitish paper—or I’m not. At such times I’m willing to admit that I’m a poet, but at others the persona doesn’t exist. It’s almost unthinkable for me to experience the arrival of what I recognise as the movement or form of a poem simply as a mental or a vocal thing. I have first to be setting words down and shifting them about in my inhibited, brain-wrenching, left-handed script. It may well be that when I write I use, as a formal constraint, the residue of the early difficulty I had over learning to hold a pen and move it across the paper in an unnatural direction. I’m a glib and garrulous talker, given to branching sentences that forget their own beginnings; but in order to get me to write them down, word-patterns have to have at least a claim on permanency. And it’s in the time of their being turned into marks that they make themselves audible to me: then I hear the chime of a phrase back and forth along its length. The muttering voice—which isn’t quite mine—in my head speaks them, and sometimes I’ll sound them aloud, Always, before passing a version as final.

I don’t see a poem of mine as a setting for myself as a character, a composition which can in some sense contain me; instead it’s something found and formed within my boundaries and then, maybe, projected out into the language-exchange to try its luck. This view drastically affects the way I compose. For while my relations with other people are—or so they seem to me—extremely simple for the most part, and certainly not likely to generate much in the way of paperwork, my relations with my own inner life are complex, shifting, and bulky, and over several decades they've produced a great heap of notebooks and journals. Although this mass of observations, sensations and introspections is inchoate, and undeveloped except by movements of its own tides, I’ve come to think of it, rather than the poems, as my work, my central occupation. It’s supremely useless to anyone but me. It doesn’t progress towards becoming a system. It gives an air of fitful authority, as if somebody had dropped the contents of the I Ching and then stuffed them back together haphazardly. Indeed, I use it as a disorderly private oracle. I can move about in it, guided by its skeins of metaphors, elliptical jargon and obsessively-acquired images, and most of the recurrent tones and images of my finished poems have first identified themselves to me by the way they feature insistently in the notebooks.

Something entirely refreshing about Fisher’s casual unconcern with all the (rather meretricious, generally) trappings of the poet beyond that “making a creature of blackish marks on whitish paper.” Some plausibly rare integrity at work. An honorable focus, no allegiance beyond the word. Fisher’s means to compose: “I quieten language down to zero: a blank page and a silence in the head. Then when the words start to come I make the text with a very simple forward progression, aiming to bring each section to a finished state as I go. Not a lapidary technique, allowing for later substitutions; more like fresco painting, where images quickly become fixed and unalterable. As the work proceeds, every new line or patch has its nature guided by the whole of what’s gone before, and, preferably by no other factors.” Compare with these lines out of Fisher’s “Handsworth Liberties”—out of The Thing About Joe Sullivan (1978): “At the end of the familiar, / throwing away the end / of the first energy, regardless; / nothing for getting home with— // if there’s more / it rises from under the first / step into the strange / and under the next and goes on / lifting up all the way; // nothing has a history. The most / gnarled things are all new, // mercurial tongues / dart in at the mouth, / in at the ears . . .”
Posted by John Latta at 7:40 AM