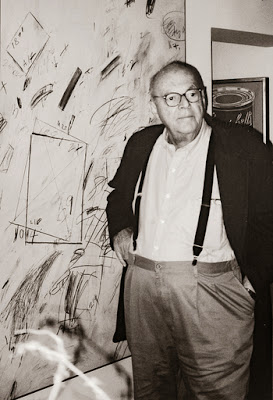 Cy Twombly, out of David Sylvester’s Interviews with American Artists (2001):

. . . It’s a sort of infantile thing, painting. Paint in a sense is a certain infantile thing. I mean in the handling. I start out using a brush but then I can’t take the time because the idea doesn’t correspond, it gets stuck when the brush goes out of paint in a certain length of time. So I have to go back and by then I might have lost the rest of it. So I take my hand and I do it. Or I have those wonderful things that came in later: paintsticks. Because the pencil also breaks if the canvas is too rough. So I had to find things that I could use, like my hands or the paintsticks. I can carry through the impetus till it stops. It’s continual. . . . I use earth things and certain human things as symbols for earth—like it might be excrement but it’s earth. And I did those charts, big palettes . . . two or three paintings with palettes and all of the colours—pink, flesh, brown, red for blood. And I think with most painters you can think and it can change very fast, the impetus of what something is. It’s instinctive in a certain kind of painting, not as if you were painting an object or special things, but it’s like coming through the nervous system. It’s like a nervous system. It’s not described, it’s happening. The feeling is going on with the task. The line is the feeling, from a soft thing, a dreamy thing, to something hard, something arid, something lonely, something ending, something beginning. It’s like I’m experiencing something frightening, I’m experiencing the thing and I have to be at that state because I’m also going.

To be ambuscaded by like seizures, to accede to the lingo’s grunt-intelligibility, jouissance, palaver and blab. To be led across the language-scape by the ineradicable rut of merely going. Writing unrestrained by anything beyond its own flaunted and peccable music. (O’Hara: “You just go on your nerve.”) Twombly: “I’m a painter and my whole balance is not having to think about things. So all I think about is painting. It’s the instinct for the placement where all that happens. I don’t have to think about it. . . . So I don’t think of composition . . .”

John Berger, out of “Post-Scriptum,” a note found in Audible Silence: Cy Twombly at Daros (2002):

It has been said that Cy Twombly’s paintings resemble writing, or are a kind of écriture. Certain critics have seen parallels between his canvases and wall graffiti. This makes sense. In my experience, however, his paintings refer to more than all the walls I pass in cities and gaze at, or the walls on which I too once scrawled names and drew diagrams; his paintings, as I see them, touch upon something fundamental to a writer’s relationship with her or his language.
A writer continually struggles for clarity against the language he’s using or, more accurately, against the common usage of that language. He doesn’t see language with the readability and clarity of something printed out. He sees it, rather, as a terrain full of illegibilities, hidden paths, impasses, surprises, and obscurities. Its map is not a dictionary but the whole of literature and perhaps everything ever said. Its obscurities, its lost senses, its self-effacements come about for many reasons—because of the way words modify each other, write themselves over each other, cancel one another out, because the unsaid always counts for as much, or more, than the said, and because language can never cover what it signifies. Language is always an abbreviation.
It was Proust who once remarked that all true poetry consists of words written in a foreign language. Every one of us is born with a mother tongue. Yet poetry is motherless.
I’ll try to make what I’m saying simpler. From time to time I exchange letters and drawings with a Spanish friend. I do not (unhappily) speak Spanish, I know a few words, and I can use a dictionary. Often in the letters I receive there are quotations in Spanish from poets—Borges, Juarroz, Neruda, Lorca. And I reply with other quotations of poems in Spanish, which I have sought out. The letters are hand-written and, as I carefully trace the letters of strange words in what is to me a foreign tongue, I have the sense, as at no other time, of walking in the furrows of a poem, across the terrain of poetry.
Cy Twombly’s paintings are for me landscapes of this foreign and yet familiar terrain. Some of them appear to be laid out under a blinding noon sun, others have been found by touch at night. In neither case can any dictionary of words be referred to, for the light does not allow it. . . .

What Proust said (out of “Notes on Literature and Criticism” found in Against Sainte-Beuve—being a gathering of “comments scattered through Proust’s notebooks”):

Pertinently, Proust notes too: “the great French writers do not know much French.” 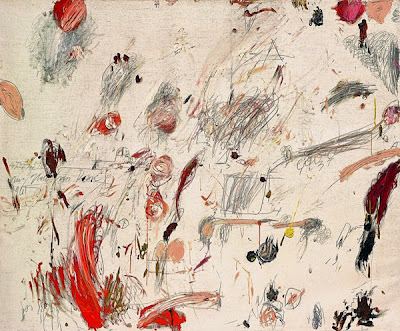 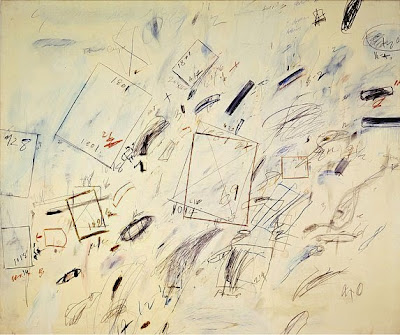 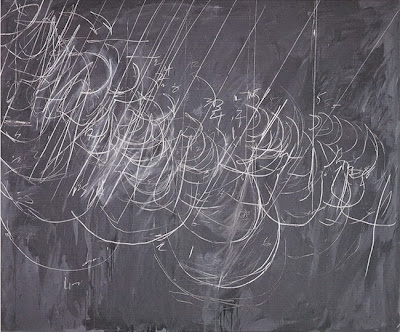 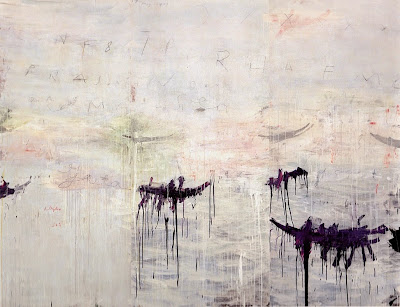 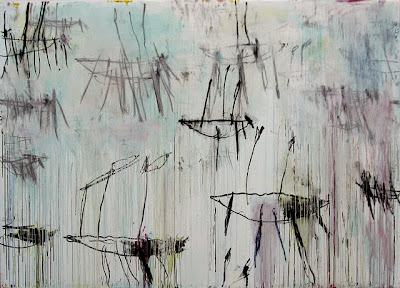