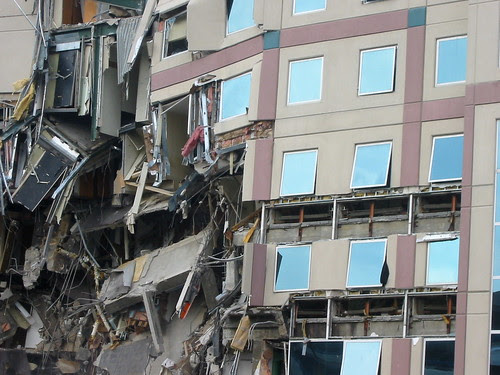 The Y in Ann Arbor (“Rathe to destroy”)

If I punch quick,
And short, and cadge
A big smoke off
What a man is
Reft of by insobriety,
Any discussing’ll be nil.
That wont to pump
Up one’s honor with
Stories of feral disobedience
In the big sticks
Bouncing off the bed
Of a truck, spread-
Eagled out against a
Green bruise of forty
Or so pot plants
Hanging out the tail-
Gate, just ripped out
Of a clearing dogged
By a full moon’s
Persistent industry poking out
Of insufficient cloud-cover,
Plant stems thick’s a
Skinny boy’s wrist. The
Mean one act’d like
A Romeo, the clownish
One the usual Boner
City goofiness, rather get
Fuck’d up than fuck’d,
Sweating out schnappes shooters
In the pizza joint,
Ending up plow’d in
The waterbed with two
Girls. Arranged for a
Confederate to pry out
A window and carry
Off a considerable collection
Of guns and ammo,
The insurance company paid
A couple of thousand,
Enough capital to run
A sizeable shipment up
Out of the city.

The title comes out of a Geoffrey Hill poem, “To the Lord Protector Cromwell,” in A Treatise of Civil Power. A skimpy thing I nosed into whilst my boy rummaged through the stock of a used-music emporium. Curious about a writer I am always curious about, always perturb’d by, laboring myself into disgruntlement. Here, baffled by Hill’s piece “After Reading Children of Albion (1969).” Sign of the difficulty of comprehending the “poetry wars” of another place. Children of Albion one of the anthologies (British version) arriving behind the locomotive of Allen’s New American Poetry, though Ginsberg’s 1965 Royal Albert Hall reading and world youth cacophony probably contributed just as much. Geoffrey Hill not included in its pages. And some of them that were: now forgot, grimping into the escaliers of the hardly noteworthy. Which makes the poem seem a little vicious:

1
Time-expired accusation, a tendresse
of news-hounds, a cave of judges, a judgment
confounded, a covenant of fuddled sleep.
Children of Albion now old men and women
compromised by the deeds they signed in Eden
forsaking dearth.

2
Kemp’s Jig was hard labour—London to Norwich.
I saw a man enact it for an hour
his stage about the space of a kitchenette.
Theatrical darkness, sound only, a hish,
a hisp, tissue of little bells. Then—bingo!—
lights! and a gold Albion uprearing
electric with a static declamation,
a stance-prancer to his motionless fingers’ ends.

A note alerts one that the italics point to a line by John James. Any reading I manage here is probably not help’d by the fact that I first read “a covenant of fuddled sheep”—and the sense of contempt for the “Children” (then and now) resulting. Or is the piece meant to represent the tough old turd affectionately cuffing the clumsiness of youth? “Compromised” by juvenilia? (A mighty sad measure of esteem, I’d say.) The “Kemp’s Jig” stanza: meant to recall the paucity of means and meretriciousness of ends (in those days)? (In 1580 Will Kemp danced the eighty or so miles from London to Norwich in nine days, winning a bet he’d do it in under ten.) Though: the current means (“Then—bingo!— / lights!”) seem incredibly amateurish, just as clumsy. (As does the overly theatrical “testing testing” segue in the final part.) “We decide we do not like Geoffrey Hill.”

Reading Jack Conroy’s The Disinherited, thinking of Jean Genet. The way improbably breath-upsucking images emerge out of a damnable quotidian rich with degradation and poverty. The Monkey Nest mine wherein Larry Donovan, fictional replica of Conroy himself, lost father and several brothers, is mined out and abandon’d:

Then the tipple fell in a whirlwind, and the stiff legs stuck ludicrously in the air like those of an overturned wooden horse. Time has had its way with the Monkey Nest. In its quiet grottos crumbling rails and phosphorescent ties are sinking in pallid slime, while flabby fungi cling to the rotting timbers. Bats scream and fight. A venturesome boy climbed down the shaft, but fled in terror when he was covered from head to foot with pulsing, furry bodies before he could travel twenty feet into the main entry. It was lucky for him at that, because the black damp knocks you out without warning. A lamp flame will not live in it.
To keep cows from falling in the open shaft, it was decided to fill it. The assorted urchins of a superannuated miner volunteered to perform this incredible feat, more stupendous than any storied Herculean labor. In casting about for a comparative peg on which to hang their undertaking, I must mention the persistent Mr. Beers of the poem, who, amidst this neighbor’s jeers, has been resolutely digging in his garden, with China as a goal, for forty-seven years. Think also of that prodigious rock in Svithjod land, a hundred miles high and a hundred miles wide. To it every thousand years comes a canary bird to whet its dainty beak. When that Gargantuan boulder shall have been worn to the level of the plain, preachers are fond of saying, it will be only breakfast time in Hell.

The boys manage the job with a “coaster wagon” wheel’d up and down full of “soapstone and slag”: “It took them a year to complete the job, but they were paid twenty-five dollars in cash, not in trade out of a company store.” That latter detail probably most astonishing of all. Where’d I read lately how Nadine Gordimer, confront’d with a trailer “park” whilst visiting these unequal States, ask’d who wrote the stories of its inhabitants. Maybe Russell Banks, married to an heiress. The way Conroy is able to plunge (zoom lens) in and out of focus—political against personal, huge economic forces against kids gleaning stray coal chunks—caught here in a lovely paragraph:

Such a transaction as buying a ton of coal would have seemed incredible to us. We bagged it in gunny sacks from the tipple, shifting the load continually in a endeavor to ease our smarting backs with a flat-surfaced chunk. We sank puffing to the sward half way home, and the surrounding terrain detached itself from the general landscape as though under a microscope. Maybe a busy tumble-bug patiently trundling his malodorous pellet, or a tribe of ants bearing a dead grasshopper. One had only to smash down with a stick or stone to feel like God loosing an earthquake or a tidal wave. We halted by a decayed log and placed our mouths against the ground, chanting: “Doodle, up! Doodle, up! Doodle, up!” If we waited long enough a small black bug would squirm energetically out of the loam, and we were always sure that the doodlebug came in obedience to our command, though tardy.

The doodlebug, found by disturbing the sand of the tiny crater it lies in wait at the bottom of, is the larva of the ant lion. Unsuspecting ants (or one’s breath) moves a few grains of sand and the doodlebug emerges to pull the ant under. (Apparently doodlebugs dig bigger craters when the moon is full.) Worthy of Pound’s Pisan jig “The ant’s a centaur in his dragon world. . . . Learn of the green world what can be thy place / In scaled invention or true artistry.” 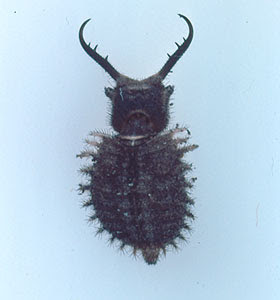 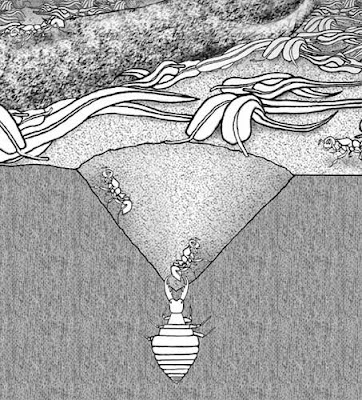