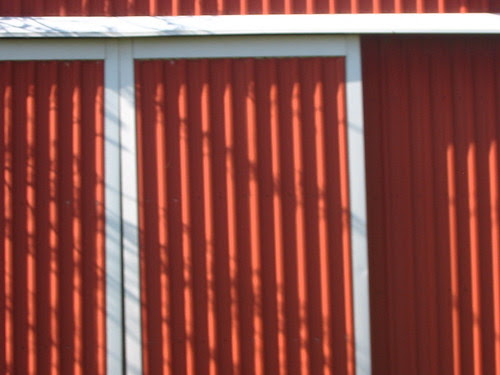 A Wall (Corrugate and Slash)

Aimlessness redux. Pinpointable. Off next week up north (Michigan lingo), and caught up in anticipatory restlessness. (Here I picture a tow-head’d kid screwing fists into squinty eyes, and dropping fists like plumb bobs, irritably readying himself.) The pawing through and weighing of the books one considers transporting oneself with: how I love that! “I have discovered that most of / the beauties of travel are due to / the strange books we acquire for going: / / Horkheimer sweating it out in Hollywood, / Henry Holmes Goodpasture cupped in the Bucksaw Mountains-trap’d sun.” Meaning, in explication de texte à la vitesse de la lumière: I am thinking of lugging along both Ehrhard Bahr’s Weimar on the Pacific: German Exile Culture in Los Angeles and the Crisis of Modernism and Oakley Hall’s Warlock. Why? The first in an attempt—latest in a series—to fumigate my Adorno phobia with a little contextual frippery. Adorno’s either—prior outings—unduly clot’d (Aesthetic Theory) or evanescent and negligible (Minima Moralia). The writing inert (hinting at my unwillingness to quarry anybody’s stolid forbidding prose for ideas, ideas toutes seules m’emmerdent.) A plus—just idling through the pages: tidbits of the uncompromising Bertolt Brecht:

With pleasure I read
How Horace traced the Saturnian art of verse
Back to the peasant burlesques
Which did not spare great families, till
The police forbade lampoons, compelling
Those with a grudge to develop
An art more noble and air it
In lines more subtle. At least that is how
I construe the passage.

Hiding the royal badmouthing behind the perennially cupped fist of verse! The more repressive the regime (there are all sorts of regimes, some academic, some the well-launder’d shirts of tired old movements poetiques), the fiercer the poetry. . .) The second book is a 1958 western Thomas Pynchon laud’d early. Why not? Oakley Hall, heading over-arm’d pedants off at the pass, prefaces the book:

Devotees of Western legend may . . . complain that I have used familiar elements to construct a fanciful design, and that I have rearranged or ignored the accepted facts. So I will reiterate that this work is a novel. The pursuit of truth, not of facts, in the business of fiction.

(Echo’d in the post-Against the Day letter of Pynchon’s defending the raiding of history?) It is a mystery how sudden readerly needs erupt. Truth is, one’ll return flummox’d by the oddity of one’s choices, three pages read in one, the other left prop’d up against a logjam somewhere in the Sturgeon whilst one dash’d off upriver after a blue-wing’d warbler or a runaway horse, “bared teeth and nozzle high in the air!”

Vladimir Mayakovsky (out of the 1926 How Are Verses Made?):

I walk along waving my arms and mumbling almost wordlessly, now shortening my steps so as not to interrupt my mumbling, not mumbling more rapidly in time with my steps.

So the rhythm is trimmed and takes shape—and rhythm is the basis for any poetic work, resounding through the whole thing. Gradually, individual words begin to ease themselves free of this dull roar.

Several words just jump away and never come back, others hold on, wriggle and squirm a dozen times over, until you can’t imagine how any word will ever stay in its place (this sensation, developing with experience, is called talent) . . .

Rhythm is the fundamental force, the fundamental energy of verse. You can’t explain it, you can only talk about it as you do about magnetism and electricity. The rhythm can be the same in a lot of poems, even in the whole oeuvre of the poet, and still not make the work monotonous, because a rhythm can be so complex, so intricately shaped, that even several long poems won’t exhaust its possibilities. . . .

In order to write about the tenderness of love, take Bus No. 7 from Lubyansky Square to Nogin Square. The appalling jolting will serve to throw into relief for you, better than anything else, the charm of a life transformed. A shake-up is essential, for the purposes of transformation.

Reminding me (I am routinely remind’d of it) of the Friedrich Nietzsche lines out of On the Genealogy of Morals (routinely, I am remind’d of it and cannot find it and seek it exorbitantly): “From what you would know and measure, you must take leave, at least for a time. Only after having left town, you see how high its towers rise above the houses.” I found it next to a Ted Berrigan line: “The true test of a man is a bunt.” Morning dog walk uncover’d a blue-gray gnatcatcher, tzeeing in air and pilfering a maple tree, a little acrobat in constant motion. Furry Lewis’s left hand, “a little acrobat in constant motion.” Ciao.