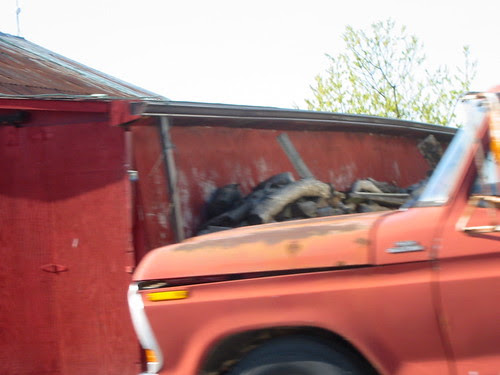 “With a Pickup Out Back”

Theo Scratcher writes: “I was on a train and sitting next to me—initially unbeknownst to me, so that the slow kindling of recognition burst abruptly into a conflagration (our clamor filled the corridor)—a French woman I’d known in college, gone missing for forty years. Had skedaddled pronto to the Bay Area, and stayed. We ended up talking about the Language poets. Very wonderful she said and very interesting but—and she looked at me earnestly with the undaunted bravado of a sportsman who’s lost a prime hunting dog to a stag—now you must admit that not one of them could feel with Alfred de Musset that le seul bien qui me rest au monde c’est d’avoir quelque fois pleuré. You must admit that.”

And, later, returning to the Language poets and the munificently grand ’seventies, all that “seriality” scrawl’d in notebooks, bang’d out by typewriters, new, naked, total: “The Language poets did not invent but made a great fuss about series production, series production really began in the nineteenth century, that is natural enough, machines are bound to make series production. The Language poets and they were nineteenth century had as their aspiration and their ideal one poem a day, really two poems a day, the morning bus poem and the afternoon bus poem actually it might have been the late morning and the early afternoon and the late afternoon, the evening bus poem. But after all there is a limit to the human hand scrawling and banging so actually even at their most excited moment they rarely did more than two more frequently one, and very often not one a day, most generally not one a day serial poem. They had the dream of a series production but as Darentiere said about printing after all they had not all the faults or the qualities of machines.” So Theo Scratcher.

I cannot seem to relinquish my investigatory savoring of Joan Retallack’s heteronyms. How S. M. Quant (in Manual for Desperate Times) writes: “In a culture of strategic simple-mindedness relishing complexity is a political act.” (And K. Callater, lightly chucking the chin of Carolyn Forché, saying, “It’s not the angel of history, it’s the angle of attention.”) Reading Retallack’s notes regarding Stein’s effort to “devise a new grammar” for the (American) twentieth century (“She was happy to concede nineteenth-century literary predominance to the British, with their method (cum virtue) of ‘muddling through,’ but for her, like Whitman, whose poetry she considered the first instance of twentieth-century writing taking on motion, the freshness, the whole-hog optimism of American culture was about that new sense of time driving language to catch up with what was now possible, what new sensations could now be enjoyed”), one thinks, “Uh oh, it’s the twenty-first century now, and that American hog’s laughter in the dark’s a bacon rind away of its slaughter in the sun” (with a nod to early internationalist Nabokov)—that is to say, what’s next? Is it time for time’s time out, space entering breathlessly through the wings? Twenty-first century writing exhibiting a world-space the size of the Pulaski Highway, the size of a corner grocery, the size of a monitor? Truth is, a writing-sized condensary of world-space means patois and overlay, all lingo contemporaneous (mad gallimaufry of “period” noises and vocabs in the quotidian soup), coterminous and conspiratorial (literally, “breathing together,” using the same air), a refusal of the narrow national, a refusal of originality and its abysmal revery of purity, writing haul’d in its circles by engines of pidgin speech, intractable scientific niggles and specifics, nonce words, alphabets for no tongue, ideograms, a worldly lingua franca, everything borrow’d and stir’d. Not “muddling through” (there’s nowhere to go), just “muddling” tout court together in the world-mire. Meaning, certes, the limit’d vocabulary register-roistering of Stein’ll come to look damnably primitive just terrible quick. So twentieth century, comme on dit. Retallack (in “The Scarlet Aitch: Twenty-Six Notes on the Experimental Feminine”):

. . . with all the noisy deconstruction going on, the ironic critiques, the chronic and tic-like irreverences, the continual exposures of presullied classical thought, history’s not ending, civilizations’s not ending, art’s not ending, nature’s not ending. Things are just becoming more complicated, less intelligible. (One can define any moment in history as the further complication of what preceded it.) This is exactly as it should be. In the sciences, intelligibility is a sign that the current paradigm is still functioning. . . . In the arts and humanities untroubled intelligibility is a sign of denial.

(That definition of history in there is a problem: how account for paradigm shifts—like Stein’s—along such a single-minded trajectory of “further complication”?)

So: shrinking world-space resulting in literatures of world-patois (“incomprehensible, vulgar gibberish”). Where it begins is likely not with a rue de Fleurus’s rentier expat out of the world’s richest state. Any big boy whipped-up “movement” of it—the new literary paradigm—’d look like a literature of imperialism (it is no longer the American hog’s moment—and Stein herself notes “Intention is not history”—nor is intention literature.). (Retallack, talking about speech noises in Melanctha: “. . . there will always be a problem with mimicking the language of any people whose lives are affected by a culturally inscribed power deficit.”) It’ll begin in high density heterogeneity, in the diverse populations that rush into (or out of) the vacuums made by conflagration, Bosnia, Lebanon, Vietnam. Retallack quoting Stein (out of “Portraits and Repetition”): “nothing changes from generation to generation except the composition in which we live and the composition in which we live makes the art which we see and hear.” The American hog’s role in the welter and wash of the proceedings? Unfailing attention and keeping out of the way. 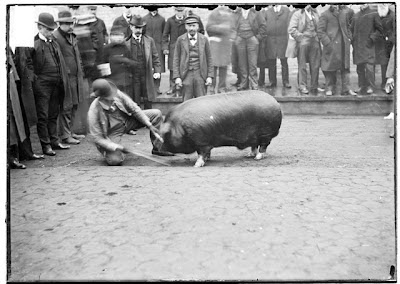