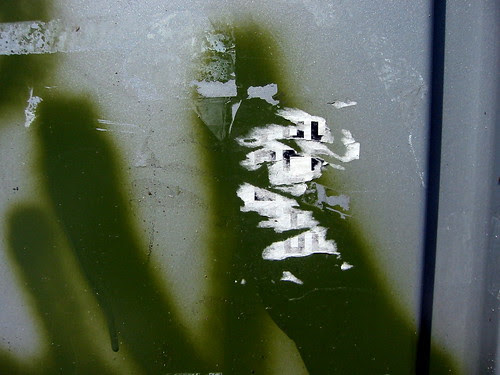 The Use of Green

I plait together an argument I cotton to by half and barely trust: that language toute seule—rev’d up and fired off into the distance—eventually’ll come back in a fever, lap itself and continue of its own accord. That is, pursuant to no rational codex. Which is a kind of mystificatory pap and smear, a pitiable lay religiosity run amok. For surely, even with brainbox sunder’d by inebriants (mine isn’t, though there were those years of addled experimentalism with the obligatory barrage of substances, all attempts to reach, as René Daumal put it, “the beyond,” that momentary placement in the big scheme of things wherefrom one’d be pure receiver only), one is sentinel to even the most asyntactical lingual romps. If language is “coming through” (Spicer), it is doing so under some auspice, though there it is: one’s up in the divine tree again, squawking like an auspex. Trouble is, it’s found in all the reports and you, even you, recall finding things seemingly writ by the boot-tracks of a posse of tiny godlets, a snowfield mark’d by a traveling army, an unidentifiably warm breath still raising the neck-hairs. (A moment of blessèd writerly automatism, so rare it becomes all one talks about.)

Funny to see—just days after reading in one of the obituaries a report how Jonathan Williams’d turn’d down Howl (the verdict being: all for the better, if Jargon’d done it, it might ’ve sold “300 copies”)—Robert Duncan’s counter-stylings of Williams’s response to Howl, how he’d “written disparagingly of it,” a sign of “just being petty.” Duncan: “I think it exceptionally petty of J. to say ‘. . . might titillate Poetry Lovers at an Intimate Reading’ . . . ‘fortissimo’ . . . etc. That little boy at heart likes a nice tidy little artwork I suspect and no loose ends. I’m going to tell him too.” Ah poetry and its interchangeable minions. Too, there’s Duncan’s “civic scorn” for the historically much-vaunt’d notion of poetic community. It outs in talk of the Poetry Center job—Assistant Director—and how it “gnaws away at my freshness.” Duncan proceeds to admit that “essentially the concept of a civic activity I cannot stand by. At very point I am liable to betray my contempt. . . . I am revolted by all this promotion of, cultivation of Poetry, until one craves a colossal scorn that would put it all down.” Is that all part of the hid obverse to the spendable coin of Duncan’s manic exhilaration? It is liable to go sourer—two months later he’s calling it a “nightmare . . . where I must see the fact of poetry exploited and promoted until I sicken on the vine”—and more pointedly (individually, malignly) aim’d. (In one single letter of 12 February 1958 Duncan says about the barrage of readings: “discrimination or discretion is a paramount emotional necessity. Tolerance is fatal—” and attacks Jack Spicer’s work with rather savage vehemence: “it is a poetry used for inflicting miseries that proliferate from masturbation fantasies (the more painful because he projects now a poetry of the wet-dream).” Ah poetry and its interchangeable &c. And Levertov, though mostly kinder (her frets and burdens and worries follow predictably more “gender’d” paths—meaning, lopsided division of labor, with concerns possibly incomprehensible to even the empathy-mind’d duo of the Duncan / Collins household), does, and swiftly, accurately, read her contemporaries. She writes about Allen Ginsberg’s “letter he wrote me from N. Y. describing his ‘planned rape of the city’ e.g. seeing Laughlin, Grove Press, ed. of Mlle., etc etc, but everybody—in a word, hustling like mad.” Plus ça change city: who be the Ginsbergs of the contemporary “set”?

Sense of attending to too many things better drop’d. Or of simple breathlessness after a couple of long draughts (of reading). If I paw out Edward Dahlberg’s book of incidental prose, Samuel Beckett’s Wake, and learn at a page-turn that Horace claim’d poets “belong to the most irascible tribe of men” or that Pound “had the scantiest regard for the caitiff illiterates of the arts, demanding that a poet be a vigorous reader,” is it enough to make me fling aside the quill and toss my rumpled self down for a stretch of perusal (or sleep) under the apple tree fat with buds? No. First I need to look for evidence of Duncan in Dahlberg’s book. (Duncan spends a large part of one year in the ’fifties trying to write a review of Dahlberg’s Sorrows of Priapus.) None. A piece about Majorca, a sentence or two about Raymond Duncan. “He wore a Greekish clout, and sandals, and was a poseur of Hellenic civilization which he affected in order to hide a Stygian parsimony.” Kay Boyle, “drudging as a saleslady” work’d in the shop he had in Paris. (More rummaging about. Brainbox recalls Raymond Duncan being brother of Isadora, recalls G. showing me the shop in Paris, c. 1973, rue de Seine or rue Bonaparte, one of the narrow streets running down off the boulevard St. Germain to the river. Recalls photographs of Duncan in the window, impossibly handsome, did Dahlberg say he look’d like Carl Sandburg? tunic’d, imperious. Or sewing equipage in the window, a treadle spinning wheel? Brainbox is shot, I cling to the raw undyed dangling strings of memory.) Caitiff illiterate I be, lacking vigor in my reading. Skimming the Kay Boyle / Robert McAlmon Being Geniuses Together for some kind of verification not forthcoming.

In the mailbag, John Shaw of Utopian Turtletop admits to posting “a poem, partly in response to your question regarding typing v. ‘word-processing’ v. longhand v. typesetting” and Brian Salchert notes that “the way I’ve been using the computer / erases the past, unless that past is also in longhand somewhere or in offline space or in a manila folder.” Elsewhere: Seismicity Vaudevillean Allyssa Wolf is writing here.

Just another amatory retard is
I (thank you, Art) running
Abaft the yipping dog pack
In a crouch of spleen
Protectives, prophylactic as a milk
Machine. I lob a brown
Canister of lachrymose distent into
A cricket match, into a
Briary thicket, into a hedge
Breach’d by no fundable gull.
I sing with my knees.
Which is enough canvas-sleeved
Mannerism for anybody to accrue
To, taxes being nearly “due.”