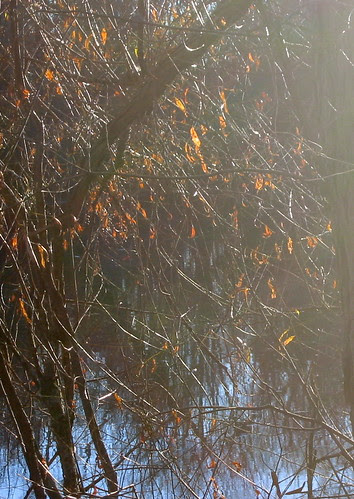 Robert Duncan: “I find I am willing to falsify. It is only when the voice in writing lifts into the language itself speaking that the truth of the made thing presides. The feeling of what is false for me is the evident use of language to persuade.” I read that and think it admits to something like a willingness to use rhetorical ploys (necessary primitive constructs) in order to get aloft the big pontoon’d seaplane of language up off the still mountain lake (in which is reflect’d itself and itself only) and into a flying state stratospheric wherein it is able (“made thing”) to look askance, anew. That is, all writing exists only to increase the odds of flight, of primal lyric necessity, language declaring itself unaid’d and bursting. (The misapprehension of the wilderness arrived at by such means is exactly what leads the present moment’s constructivists to wearifying denunciations of the plausibility of such outbursts. One is remind’d of someone who, having never “achieved” love’s orgasmic rout—the very fact of considering it an “achievement” is telling—decides the ischemic amassing of a fat portfolio’ll serve equally well. Constructivism, by definition, disallowing the uncanny spastic gait of language jerking out of its own accord, muscular, contract’d by no one but itself.) It is, I suspect, what Olson meant in calling a poem or two of Levertov’s “measured, ‘made’”—a disappointment that something be abandon’d prematurely, disallow’d its flight, pieced out of tenuous thread, or thicken’d with flour—to harry the metaphors into a little frenzy—to make the “sauce.” (The Basque ligado or pil pil wherein a slow cooking of salt cod, olive oil, and garlic, sliding the pan in ceaseless easy circles, arrives at “a creamy, opaque, ivory-colored sauce” out of some alchemy of the fats in the skin of the cod—that’s what one’s writing must be capable of, whatever the initial “ingredients.”)

I get away. Some tonsorial need to trim down the Duncan reading with a little of the Kurlansky book about the Basques “just before sleep” asserts itself. “It quarrels with the tune of things,” as Duncan’d say. Everywhere in the letters the sense of ridding oneself of, shrugging off, the “approach” with all its ratiocinatory binds and boundaries. Duncan, whilst “balking at the submissiveness of learning,” claiming it “necessary to yield so to the language—not to use but to be used.” Levertov, echoing, quotes something out of one of R. H. Blyth’s volumes of haiku, the rather koanic “the aim of the explanation . . . is to make itself unnecessary. . . . the indispensible must be got rid of in order that the truth must emerge.” Duncan pointing to a Ginsberg poem’s failure: “the earlier ‘Xbalba’ that appeard in Evergreen: with the proposition ‘No construction—let the mind fall down.’ My sense that there could be a poem is whetted. But then there is no dis-construction in it—only lazy lines, loose talk that get looser and soon he’s asking ‘what love in the cafes of God’ which is both exalted and gassy.” Or, talking about “two days struggling with ‘Sometimes I Am Permitted . . .’ [with all the irony of the reference in the poem to the grace of writing at all],” and admitting “I mistrust the rationalizing mind that comes to the fore, and must suffer thru . . . draft after draft to exhaust the likely and reach the tone in myself where intuition begins to move. It comes sure enuf then, the hand’s feel that ‘this’ is what must be done.”

There’s talk about Zukofsky (who’d come, summer of 1958, to do a poet-in-residence / workshop in San Francisco, apparently Ebbe Borregaard attend’d, whose imprecisions and expansions Zukofsky “attempted to curb”) Interesting how Duncan points to Zukofsky’s mistrust of Pound’s “only emotion endures,” mistrust of “mythos, aesthetic fervors rather than reason” and failure to comprehend what Duncan calls “the governance of desire.” Duncan: “It robs a long work like A-1-12 of emotional proportion and hence of epiphany.” In a lovely phrase, Duncan notes how he finds in Zukofsky’s work “an area of sympathetic contrary.” “He is always puzzled by my allowance for dramatic rhetoric . . . and the pursuit of the fantasmal . . .”

In the mailbag, part of a conversation with Bobby Baird, who quoted some of yesterday’s gabble back—

It’s stunning (to me) to conclude (suddenly, revelatory) how a whole monkey’s offspring of poets norteamericanos never had to retype a whole page in order to change a single word. That kind of busywork’ll cut into one’s certainty and spill in a hurry, make for a jive consider’d gel, and not no whippet-thin dribble. (A corollary: how, in the age of ransackable “fonts,” the experience of seeing one’s work suddenly dignify’d by variable spacing (in a magazine, or book) is no longer available. One sees final product thrown indefatigably up against the flat screen soon’s the get-go, no chewable moment of transformation (introspection and regret) allow’d. Duncan: “I do love the solid print. One sees again, meets the poem anew (as if the typescripts then are suddenly freshend too—a book springs to the imagination)—”)

—not a word of which had I to retype, and noted—

This is obviously right for a wide swath of said poetas norteamericanos, but I do think there’s a fair number of youngish poets who do recognize the virtues of the busywork you mention in yr first point. I couldn’t name them offhand, but I’ve heard of people who grew up on computers reverting to typewriters for just that purpose. When I write poetry I do it longhand, to preserve / create some semblance of viscosity in the writing process. Not true for my fiction, which I more often compose by the paragraph than by the word or sentence, though I do sometimes fear that I’m losing a valuable step. My justification for using the computer so freely is that it makes it so easy to save multiple hundreds of versions of the same document, draft after draft after draft. But perhaps that’s missing the point: maybe it’s better to put all the mental / creative effort into the gap between draft 1 and draft 2 than it is to dilute that effort over a dozen drafts. Dunno.

And on your corollary point: when I do write on the computer I do it all in Verdana or some other ugly font in order to achieve just the effect you mention. I’d guess I’m not alone in this, but I’d be curious to know if you get other responses along these lines.

To which I reply’d in part—

That’s interesting, the ugly font, the saving multiple drafts on the computer (something that never occur’d to me), the possibility of retrieving old typewriters for that purpose. I think what initially made me think about typing in the letters is the repeat’d “I’ll send you my new poems soon’s I get a chance to type copies for you” on the part of both Duncan and Levertov. Which led to thinking about friends of mine in the seventies, typing draft after draft of things. (I was never very persistent with revisions, I’d scribble a bit on a good copy, type it again and be satisfy’d.) But it’s also true that once I got a computer (mid-nineties, in order to “put together” my dissertation), I start’d composing in longhand, whereas before I’d mostly work’d straight into the typewriter. Now I do a little of both, though mostly straight out New Times Romaning everything so the flaws are unspottable!

And part of Baird’s reply—

The ugly font trick was something that Annie Dillard taught me, and I think it works well. After working to make something as good as you can get it, you get that little extra “bump” just from the letters all fitting together so nicely in print. She’s also convinced that the computer has ruined the contemporary novel . . . and so has tried to convince all of her former students (of which coterie I’m a sort of ersatz member) to get themselves legal pads and start there. Again, who knows . . .

. . . I would be curious to hear if what others say, if anything, on the matter. I count myself as one of those people who’s always checking out other writers’ material writing arrangements, the arranging of which obviously has so little to do directly with the putting of pen to paper or finger to key but which also provides a kind of psychological balm, the necessity of which is never to be underreckoned.

I used—in the days of hand-setting books for letterpress at Ithaca House, lifting each single letter of a piece into the job stick like some uncertain Isidore Isou—to argue that that speed of assembly drew attention to a poem’s faults better than any other I knew. That it ought to be required work for poets. I would get halfway through the setting and printing of a book and begin to suffer huge doubts about its worth. (I did the typesetting, if I recall rightly, for only a few of the poems in the Ithaca House print’d Rubbing Torsos—off in France for most of that—and I don’t recall any particular spot revisions in doing so, though I recall thinking about it. Probably my sense of its being already not mine (the way books become) ’d kick’d in.) Anecdotal way of saying I’d entertain public “thots” on such issues should you want to write.