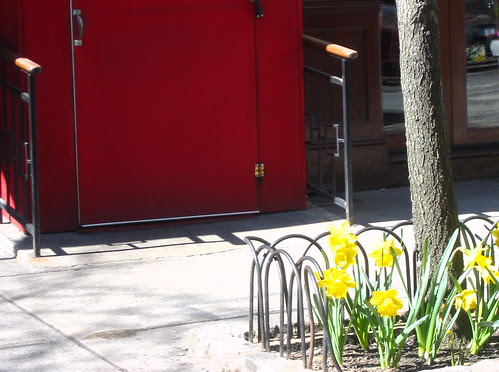 Another notch along the trail to summer’s here and here
I am still stuffing piles of leaves off the monstrous oak into tall bags to put
Out by the curb. Kerb is the British spelling, just as they talk of turf where we’d
Use lawn. Kerb recalls kern, a lovely word
Referring to any part of a letter that projects out beyond the block of type itself, the way
The tail of a capital Q does in some fonts, occasionally reaching out to fit
Under the u that generally accompanies it. Except in Qatar.
That’s a conversational duffer, who knows anything about Qatar? I recall
Out of my skinniest-ape days of middling philately—isn’t collecting tantamount to a failure
Of use?—that Qatar issued an inordinate number of stamps, triangular, emboss’d, shiny.
And some years back I inhabit’d a house with a number of other “young people,”
One of whom, a standoffish woman who seem’d to eat nothing except radishes, had a boyfriend
Working in Qatar. After she depart’d to join him, a Qatar blue aerogramme letter arrived address’d
To her. Out of malice no doubt for the way she’d refused to participate in the house’s
Recklessnesses, somebody steam’d it open: it contain’d a long testimony to the man in Qatar’s
Sexual insufficiency and made its readers bray (outwardly) whilst the needles of the individual
Conscience-galvanometers flick’d all the way into the red region
Mark’d shitty. Though nobody would’ve put it exactly so.
If morning comes around with its saucy airs a good thirty years later and one’s
Pickled by worries about car repair—isn’t that apt to derail whatever charge one seem’d
To be building? Out by the state college with its white trim and brick they’re tearing
Down the temporary grandstands, the boat-
Show of graduation day is done for another year, another bunch’s completed
Another of the tasks assign’d it, though who’s doing the assigning’s never said. I never
Want’d anything so stability-provoking as a career, and to the extent possible empty’d myself out
Of the ranks of those in pursuit of one, found my druthers in sideline mockery and catcalls,
Gadabout and gadfly to the earnest minions to the idea of success. Career out of
The French carrière meaning racecourse amongst other things, the way
Language chases its own tail, turning back to look itself up and see the thing that it is following
Is following it. That’d be one career, something publicly conspicuous, bouncing off the spry notion
Of advancement whilst remaining in a turning tangle of fur and fury, incisor and tail.
Everything comes to mean its opposite (careen, that species of dervish and instability,
Coming out of carena, an Italian word for keel, that evening
Stripe of a ship). The temple-sneerers enter the temple so long accustom’d
To sneering at the temple they continue to sneer within it, a mawkish sight (a mawk
Is a grub). Oh one goes along like a billowy white cloud, all puffery and adept, one little semi-
Circle of moisture-heavy air overlapping another the way the tumbler of bourbon used
To make intricate rings au zinc, the material the French used to surface bars with,
The “bastard” element according to Paracelsus, suspecting its impurity. I’d like
To find an etymological root merging purity and poverty, arguing for extraneity
And outness, or a bagged-up wealth of leaves and dirt.

Am I akimbo with that? I don’t know. I am in cahoots with the “idea” of it, though I suspect it must needs go along up a longer hill. Long enough to diminish the effect of its particulars and makes its ongoingness the thing. Obviously Schuylerist in tendency. Schuyler renews me every spring.

Errand-city weekend interrupt’d by smatters of Dos Passos. It’s entirely likely that I am over-enthused by such romantic revolutionist’s sentiments as character Richard Ellsworth Savage’s, here:

All the time he was packing his books and other junk in his dufflebag and carrying it on his back up the quais to the Gare d’Orleans, Swinburne’s Song in Time of Order kept going through his head:

While three men hold together
The kingdoms are less by three.

By gum, he must write some verse: hat people needed was stirring poems to nerve them for revolt against their cannibal governments. Sitting in the secondclass compartment he was so busy building a daydream of himself living in a sunscorched Spanish town, sending out flaming poems and manifestoes, calling young men to revolt against their butchers, poems that would be published by secret presses all over the world, that he hardly saw the suburbs of Paris or the bluegreen summer farmlands sliding by.

(The Gare d’Orleans becomes the Gare d’Austerlitz—state naming’s constant sop to imperialism—and Savage becomes one of the hangers-on around Woodrow Wilson at the 1919 Paris Peace Conference.) Is Thomas Pynchon one of the few inheritors of Dos Passos’s ambition? Character put second to historical scale, one’s ideological alliances up front.