To the North, & Back 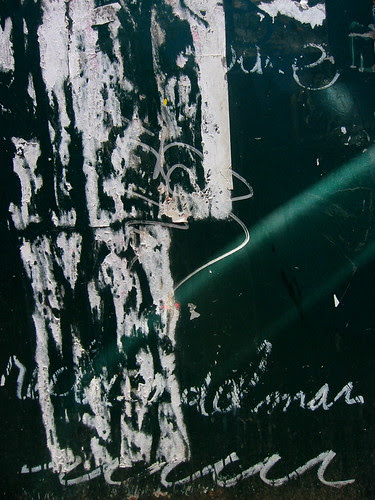 “What to do / when the day’s gaunt orbital codex / slices through night’s dauntless and Nembutal’d cortex / in a wake of an impertinence . . .” Sunday one launch’d oneself “to the north”—four hours driving to a drop-off, four hours back. A funny excursus. Looking for a stretch along U. S. 127 where the Maple River’s all floody along two sides of a low bridge: usually there’s a half-dozen or so egrets tilting out of it, all perfectly angled, leaning white spikes. “I count on it.” Popping Dylan into the box, thinking about how he, like Ashbery, pulls down the oddball American demotic off the airwaves: “If you don’t believe it you can follow your nose.” Or how he crams a line fat, too fat, excess vocables requiring a mean enunciatory vigor—“Romeo, he said to Juliet, you got a poor complexion that don’t give your appearance a very youthful touch. / Juliet said back to Romeo, Why don’t you just shove off, if it bothers you so much.” In the drifty back canyons of my brainbox—a scratch of thinking about long-lined-ness, spur’d partially by a look at Charles North’s “Schuyler’s Mighty Line” wherein he notes “the advent” of Schuyler’s “exceptionally long line” occurs with the appearance of “The Morning of the Poem” in 1980. I read that just after seeing Charles Wright talking in an interview about trying to stretch the line out longer and longer to see what weight it’d carry (and how it’d snap off, making drop’d down half-lines). (Elsewhere he talks about “applying” lines like paint, using color and form to delineate the shape of an area, after Cézanne: “What I was interested in doing was relaxing the line, using the line more as an overall unit in the poem rather than as a bridge from one part of the poem to the other—as one bridge to another bridge to another bridge. In other words, the lines in the stanza are applied, in a way, rather than narratively leading from one thing to the next.”) He pinpoint’d that experiment’s being 1977 (and continuing): on the heels of the severely cut back, stripped down (never so short’s Shuyler’s though) lines of China Trace. The nigh concurrence of dates: what—if anything—to make of it. Thinking, too, of C. K. Williams’s long lines (beginning with Tar (1983)—and of some of the San Francisco contingent of language writers pushing the line out and out (or into prose), même “era.” A. R. Ammons’s long-lined longer pieces predate some of that—Sphere: The Form of a Motion is 1974. So do, of course, Ginsberg’s “Howl” hanging catalogues—though there, something like “who chained themselves to subways for the endless ride from Battery to holy Bronx on benzedrine until the noise of wheels and children brought them down shuddering mouth-wracked and battered bleak of brain all drained of brilliance in the drear light of Zoo,” isn’t consider’d a line so much’s a breath, a “heave”—there’s no attending to its breakage or not. Similarly, Sphere’s basic unit of construction is the three-lined stanza:

mind, many-sided, globe-like,
rich with specification and contrariety, is secure from

slogans, fads, starved truths, and propaganda—defeats itself,
meanwhile shoring itself up with sight and insight: how to
devise a means that assimilates small inspiration into to

large space, network, reticulation complex (almost misleading)
but moved forward by a controlling motion, design, symmetry,
suasion, so that harmony can be recognized in the highest

What if one consider’d a series of imaginary allegiances and alliances “based” on the superficies of line-handling (sounds rather athletic, no?) Wouldn’t that make Schuyler and Wright coeval? So it goes, driving. The undamp’d patter of battery of ruminating—interrupt’d by impingements, sonic, visual. The great blue heron trailing its legs, the scatting meadowlark’s white coverts flashing as it erupts out of the median. Or Ray Charles saying to Marian McPartland that some other’s’d see the songs he loves as “antiquated” because the lyrics tell a story. And proceeding to growl out “The corn is as high as an elephant’s eye . . . All the cattle are standing like statues” out of Rodgers and Hammerstein’s “Oklahoma.” Back, the high shreddy clouds of the nadir blushing with peach highlights pick’d up off the west’s fiery underbelly. I would never write my sublime essay about line-lengths. I start’d a poem call’d “The Mandarins” beginning “Stealth, like a shit, stole through the streets,” and stop’d. 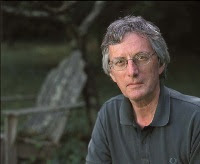