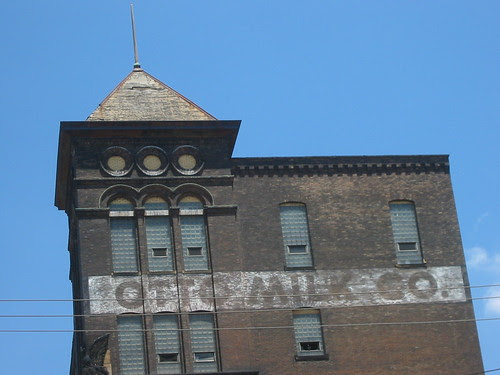 Yesterday, unalarm’d, though in a state of abeyance, though not exactly unpreparedness, tenterhook’d by a probability, pans hotting up in the fire, dawdling, I try’d to recall it, something that’d hammer’d at the temple of romantic love in my decimated youth, oh my golden youth! “When I begin to tell anybody but you it begins to be lost” is how I put it. I hate paraphrasing. Something out of an early O’Hara poem-letter to V. R. “Bunny” Lang. “Maybe it says something about an incinerator” is what I put down, uncertainty ruckling through my pores like linen bunch’d or distillery offal, sweet clarity. So I look’d it up. And typed it up, in an excess of forlorn piety for that youth of mine, misplaced somewhere out under the huge rough leaves of the burdocks:

A LETTER TO BUNNY

1
Once before I tried to tell you
about the incinerator. Last summer
while I was living in the hot
city. All day long at the theatre
would flash in my mind this thing
and that thing too, but usually
that heavy cave where there were
no flames bothered me And I
could not tell you, Bunny, then:
there was always my spiral
staircase and the diamond pattern
of the well, the eerie sound of
a quiet house, le Boeuf sur le Toit
and friends who would fight and
would not kill anyone silently.

2
Now, as if this had bothered me ever
since, I find the words are at the
front of my mind. The incinerator
is clearly horrible, soundless, cold.
I went there too often with those things
dear to us both: the tinsels and the
velvets of the stage, the broken sets
and used drapes and tattered scrims,
and they were not consigned to
any glorious or at least bright
immolation. Just a clean dump. Do
you wonder it’s bothered me? you
don’t, we troupers in private know
all about carnival gestures. Before,
I wrote, “it’s grey and monstrous” which
is false, and fumbled after “hints of
mysticism” or “death’s shrewdnesses,”
all notions, all collections of sentiment
that make a poem another burner full of
junk. You enable me, by your least
remark, to unclutter myself, and my
nerves thank you for not always laughing.

3
But I still fear to mention the blue
flowers. They scared me most and I
prolong other talk. There were fields of
them around the place, all blue, all
innocent. The artificial is always innocent.
They looked hand-made, fast-dyed, paper.
They nodded ominously in the sun, right
up to the edge of the concrete ramp, a
million killing abstractions, a romantic
absence of meaning, a distorted prettiness
so thorough that my own eyes rolled up
in fear for their identity and I involuntarily
cried at the thought of tiny mirrors where
the object is lost irretrievably in its own
repetition. Is this how beauty accompanies
fear so it can escape us? Do you think these
flowers could be auctioned tintypes or souls
outside hell? Is blue what they mean by
“shun posterity” and “the price of fame” and
“fear of death”? Have I learned it wrong?

4
When anyone reads this but you it begins
to be lost. My voice is sucked into a thousand
ears and I don’t know whether I’m weakened.
Bunny, when I ran to you in the summer
night and upset us both it was mostly this,
though you thought I was going away. See?
I’m away now, but I’m here. And even if the
rose has been ruined for all of us by religion
we don’t accept these blue flowers. The sun
and the rain glue things together that are not
at all similar, and we are not taken in
by the nearness, the losses, or the cold.
Be always my heroine and flower. Love, Frank.

Written, according to the notes, in Ann Arbor, in October, 1950. O’Hara twenty-four. Funny how what sidles into the greasy brainpan now is not what did a quarter of century back when one first encounter’d the thing. Now it’s: “all collections of sentiment / that make a poem another burner full of / junk.” Poem as incinerator of the sentimental (that’s why—one must recollect, and unstintingly—it throws off heat). I probably recall’d the poem largely because of David Shapiro’s reporting yesterday how Kenneth Koch suggest’d O’Hara’s “all heart.” Of course he isn’t. Though: he is wholly willing to dabble in puddles of sentiment, the private, the ruin’d, the personal—all that that opposes a larger “public” voice. (It is “Personism” handwrit early: “A Letter . . .” to a particular someone is the thing, doable. Beyond that: “it begins / to be lost,” the “voice . . . sucked into a thousand / ears.” Beyond the heart’s nervy and restrict’d stammering: “The artificial is always innocent.” Innocence is heartless, public, associated with “a / million killing abstractions, a romantic / absence of meaning, a distorted prettiness.” So that: the piece shrewdly musters all the arguments against its proceeding (“we don’t accept these blue flowers”) and proceeds anyway. Therein the tension, therein the “heart.” Is that—“heart,” the threat of sentiment’s pure erupting—something available in the writings of the current “era”? (I nearly put “administration,” so heartlessly the train’d dogs keep the product going out.) Product terminally mark’d irony, heart’s deflating stamp. Is there an echo of Williams’s Spring and All “By the road to the contagious hospital” sequence in that letter? Or am I confusing the blue of O’Hara with “the surge of the blue / mottled clouds”?

Silliman’s sullying (again) the barely noticeable rivulet (call it a “rill,” call it a “runnel”) of History Poetickal with ’s “What’s the next big thing? What’s the next big thing?” tremolo, a high-pitch’d irritant. It’s a tidy (too tidy) rhetorical ploy: assuming the position of doing the calling (to the young) allows one the pose of the déjà arrive, the—“Yoohoo”—already “call’d.” “I hit my fungos, you do some now.” So the militants of the disposable new cry in the streets, huddled together, massing up for mutual bleak concordancy. As if the world, or poetry, need’d—constantly—something “new.” Most “new” things belong to the category of the re-fashion’d (in two senses) old anyhow.

[Insert idly-construct’d paragraph detailing “(Pages of illustrations.)” Recall that the connoisseur of chaos himself clarify’d the way the dialectical spasm work’d: “A. A violent order is a disorder; and / B. A great disorder is an order. These / Two things are one.” Say “If Khlebnikov drops the verb out of the line, he draws on the practice of Fet. Fet!” Say “Cubist all-angle simultaneous looking draws on the Photomat “experience” or Kinema-werke sequentiae vivendi or the series of Medieval “stills” out of the lives of the saints, or the stations of the cross. Cross!” Say “Silliman’s own “new sentence” is just gussy-up’d Poundian juxtaposing out of imagism—“Old phenomena . . . preserved in Teutonic” says a minor avuncular god—Pound out of the Chinese Book of Songs paratactical (a military grouping, see “tactic,” of “alongsidedness”) oomphs of circa 600 B.C.” Say that.]

Says Roman Jakobson: “one does not choose artistic forms the same way that one chooses a pair of gloves in a fashionable store.”

People forget the fact that the life of art entails a change in the methods of formulation, that for every form there comes a moment when it “is transformed from a progressive form of productional forces into their chains” (Marx).

A new artistic form is a deformation of the old, a protest against it. A peacefull coexistence in time of two artistic forms is as inconceivable as the coexistence of two geometrical bodies in space. The old art, destroyed by the attack of the new, leaves behind various so-called “cultural survivals.”

In so far as the tasks of genuine revolutionary artistic propaganda are to revolutionize cultural, particularly aesthetic, habits, it should, with all the means at its disposal, destroy and nullify all these cultural survivals. In other words, the elimination of artistic statics, the battle with epigonism, in the task of artistic enlightenment. The apologia for eclecticism, for artistic compromise, signifies a revolutionary debility, a creative impotence. An epidemic so such compromise coincides with moments of social decadence.

Que je sois débile! How square Jakobson with Silliman’s oddly vacuous version of whence cometh change? For, after claiming that: “The history of poetry is the history of change in poetry, an account not of best works, but of shifts in direction, new devices, new forms, as Williams once put it, ‘as additions to nature’” and lauding “the first to do X” for “cruder writing & rougher edges,” he stumbles. Because of an unwillingness to admit (as even Jakobson does, see the “new” as “deformation of the old”) the usability of the old practices (the past, Silliman’s bugaboo, as it is for many caught up in the juggernaut of “advancement” (two senses)), he settles for the startlingly expressivist notion that “change can occur at a pace that has more to do with the inner needs of writers as they confront their lives. Change, when it occurs, is driven by this confrontation.” Change occurs through the inner needs of writers “confronting” (whatever that means) “their lives.” Unworkable, and nonsense. Isn’t History Poetickal a broken cenotaph (its lopped off column witness to its aspirings and limits), a dialectic, an alternating current? Its major vacillancy: speech and “I HATE SPEECH”? (In one version of things, one could neatly align language writing not with Silliman’s beloved (and ineffably speech-orient’d) “New Americans,” but with the manner’d ’fifties formalists of the Hall Pack Simpson anthology who, too, hated speech.) Says Benjamin (“Theses on the Philosophy of History”): “The historian’s task is to grasp the constellation which his own era has formed with a definite earlier one.” 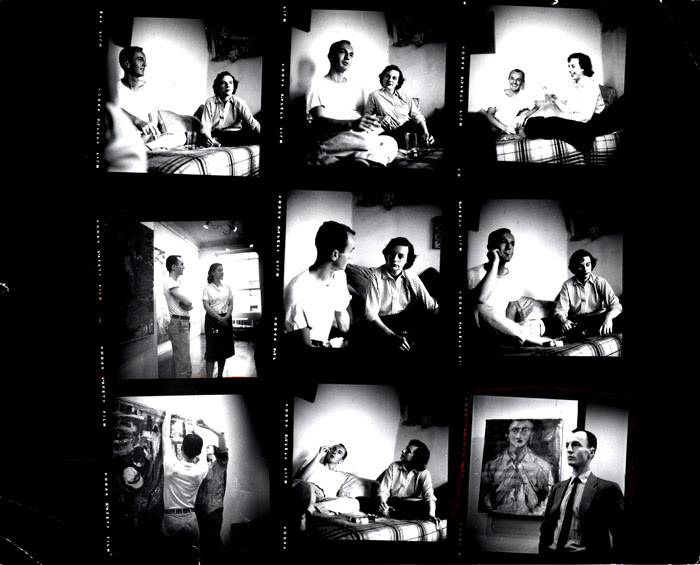