My Name Is Mattie Ross 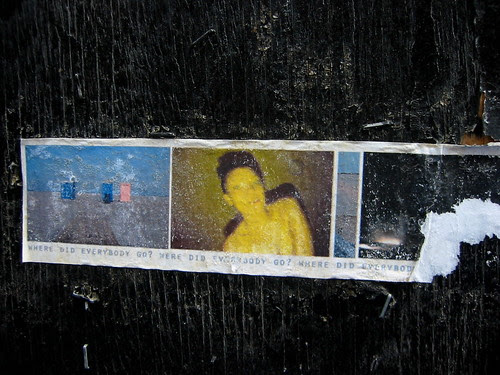 “Where Did Everybody Go?”

A clabbery of particulars, shingles stack’d against the shed’s one-hinge door. Of everything make an ars combinatoria, schooling dissimilars into tentative and irregular formations: getting in the swim of it. Manoeuvrable echelons, fleet eidolons: moving around the pawns of memory. Keep the boat keel low, the body’s snaky center of gravity in a bend, inconstant—refuse to castle, keep the king (whatever the king is) out of corners.

I am reading Charles Portis’s True Grit so that I might retrieve the sound of my own self at fourteen in the figure of Mattie Ross of Yell County, Arkansas. I think American poetry suffers a pulchritude of character, a dire need for talk that comes out of girl-fierce physiognomies with complaints rattling around the yard like pea-sized ticks being chased by a guinea hen, saucy as a tobacco-spitting Carolina grasshopper. I am ate up to here with philosophy and its gimcrack conventions, its diagnostic fervors. Shouldn’t the scream of the antithetical meet human flesh in an uppercut? Isn’t necessity a style more replete and “of the world” than any attenuated diminuendo of fatuous tics, ticks measuring one’s regalia against that world’s? (Roland Barthes says: “Style . . . introduces a rhythm into fatality.”)

I pick’d up Aaron Shurin’s King of Shadows (City Lights, 2008) and wow’d myself with comprehension, with my ability to hold two suasions pulsingly against one another, hump day breakdown, happiness holding tank here in the oscura selva, no irritable reaching need’d. Two saliences bumping one against the other, if you’d like—I’ll stick my “neck” out that far, no problem. Shurin says:

Poetry is that literary form in which both the depth function and the surfaces of language are activated, and, pleasures abounding, you are constantly threatened with being in one at the expense of the other. There is no rest. To be in a poem is to live in that constant peril by which meaning is transferred in and out of its form, language performing sensual, decorative, counter-semantic moves just as it absorbs them into structures of content. “Luscious woodbine,” and “sweet musk roses” would break away from the very bank in which they’re planted, as the reader, “lulled in these flowers,” loses his “odiferous” way. Narrative information gathering and dissemination pretends to architectural stability; the terrible pleasure of verse is to heighten the mutual tension, to dare to undo coherence by agitating sensory display. The whole unit is tougher and more durable for the stress. To ride this contradictory wave in balance is to read a poem in poetry’s mode. In and out of presence, appearing and disappearing: The vow of poets attends such elegant suspension as sport, where we are spirits of another sort.

I doubt one need say more about poetry, ever. I think that’s perfect. “There is no hoorawing in it,” as Mattie Ross’d say. It presents poetry’s pleasure and difficulty without consternation or exaggeration—and it makes no tinny faux claim of the art’s ongoing “advancement.” Ars combinatoria. T. E. Hulme’s image-rack, “which would hand over sensations bodily” cut against Bergson’s intuit’d romp stripped of the preconceived (though not of history, that crux the life-in-process militates within. (I like to make a friable fist-sized clot of words just to see if it’ll hold—thud it against a bull’s-eye daub’d on the barn.) There’s a redounding beauty in it, a word the “era” avoids.

In medical schools you have courses in the history of medicine, but I don’t think one has courses on the exact and practical use of the leech, or how to bleed patients in order to reduce fever. Other techniques have been substituted. In music, in 200 years, what we’re doing now will be considered just as primitive as leeches. But as far as I can tell, at the standard music schools they're still teaching the same literature that they've done since I escaped from Juilliard 40 years ago.

And, regarding the necessary approach to new texts by string players:

They need to fight with the text, and have the text fight back with them.After they have come to some conclusions and have made a determined effort to understand what’s going on, if they want to see what somebody else did, well and good. But to this day I don’t think I have ever played a piece based on hearing a recording of it. I cannot tell you how many times I’ve been seduced into wanting to do a piece because I’ve seen the music.

“I’s (pronounced eyes)” Or, mieux, “The tune’s image holding in the line.” The duel insistence of the avant-garde: difficulty (“fight with the text”) and progression (“primitive as leeches.”) What is lacking, the first thing to go: world-changing. Lost in the determined clamor. Leech use redeem’d in twenty-first century. Beginning of my trajectory of rejecting the vacuous new, ministry of mere technē.

Off I went to viddy Juno outdoors, squatting in the street, curb-perch’d. A fine piece of hyperstyling—it’s “instructive” that the opening credits roll by in desaturated cartoonery. The language suck’d up out of the corners of books, put into the mouths of kids. (Perfect: they’re busy trying things out.) Juno says something right off the bat—to a dog named “Bananas”—something like “Jeez, Bananas, shut yer friggin’ gob!” (The movie is set, however, not in gob-talky London, not even along one of the “dual carriageways” en route thereto—but, vaguely, in Elk River, Minnesota, a county seat speedbump caught between St. Cloud and Minneapolis.) That’s international breezeway language, what blows through the populous corridors of cyberspace: in the disjunct between speech and reality lies the excitement, what fun to negotiate a world not one’s own. Which is precisely what teenagers must do, particularly pregnant teenagers. Reminding me suddenly of Mattie Ross again, in True Grit, how she’s always trying on expressions for size, propping up the apparent uncertainty of they word-ness with “invert’d commas.” She says:

I have known some horses and a good many more pigs who I believe harbored evil in their hearts. I will go further and say all cats are evil, though often useful. Who has not seen Satan in their sly faces? Some preacher will say, well, that is superstitious “claptrap.”

It was good dark when we came to the “dugout.” . . . A “cockeyed” chimney of sticks and mud stuck up through the bank at the rear of the house.

(Juno’s version of it: “Your little girlfriend gave me the ‘stinkeye’ in art class.”) Against which put the exchange between two men of the grown-up world:

“You do not think much of me, do you, Cogburn?”
“I don’t think about you at all when your mouth is closed.”

How I feel about the rabidly “post-avant,” its writerly “wing.” Any style that relegates the sheer joy of speech “to the backseat” is “cockeyed”: “I’s (pronounced ‘stinkeye’).”