The other day I caught a YouTube’d Rahsaan Roland Kirk barking out a thing about making a sound, with, he says—the mischief of it palpably tongued—“climaxical (or maybe climaxiple) force.” Damn. Had to write that word out in its versions, and screw up my eyghen obtykes at that word. Had to work the very cud of that word like a ruminant undeterred by the bevy of green-bottled flies . . . and try it out every hwælch weg with my toongue. Ah, materiality, foist (meaning, d’abord), ought be that fun. Even though it border the fey. Or camps it up to the Nth. That’s the kind of thing I think looking at Julian T. Brolaski’s gowanus atropolis (Ugly Duckling, 2011). For there, forsooth, lines like “xe is my enemigma / & shall endure all my privlege // sconced hilt orr rod dilf / you may check me tomorrow” (out of “what ys my anatomie”) and “my present page             in l-l-livery // liminal             ack             posserity // divest by number” (out of “buried at sinrise”) and “todo el tiempo quelque new atrocity / met w/ flies” (“the pit of tutivillus”) and

polymorphously, it’s the juice
n I stand by my ambivalent sidekick

Beyond “materiality,” isn’t there, too, in Brolaski, an insistently inventing cusp of “homotextual” lingo? John Shoptaw’s slippery term, referring to texts liable to “‘behave’ differently, no matter what their subject.” Texts full of “distortions, evasions, omissions, obscurities, and discontinuities.” Shoptaw points to Ashbery’s “trademark ‘it’ . . . as a neuter-gendered homotextual signpost.” I use it here to point, too, to Brolaski’s relentless neologick’d teasing of supposed grammatical certainties, a kind of continual on the fly making of new temporary structures. Brolaski (“what ys my anatomie”):

Look how that “ynventing” is both something one “haf”—long s reading, has done—and is—phonetic reading—half-done, never wholly completed. And how such “ramshacklry” is both deceiving, an illusory surface—“trompe l’œil”—and, French in its versions throwing off sparks, result of “wronging” the law (French, loi), a tromp’d down law. The fury of signifiance here, exfoliant in a phrase, is a direct result of Brolaski’s pliable, malleable lingo.

I recall, reading gowanus atropolis, days back in the hetero-norm of my youth, wondering at something like O’Hara’s “cold in the dull heavens, / drowned in flesh, / it’s the night like I love it all cruisy and nelly / finger fan of boskage fronds the white smile of sleeps” (“Easter”) or “when the Vitalità nell’ arte catalog came in the mail I laughed / thinking it was Perspectives USA but it wasn’t it / was vitality nellie arty ho ho that’s a joke pop” (“Biotherm”)—thinking I’d likely missed something there (like the joke). Danger of cleaving to the lordliness of one’s own idiolect, or milieu. Though I think of Robert Motherwell’s adages in a letter to O’Hara (18 August 1965):

The problems of inventing a new language are staggering. But what else can one do if one needs to express one’s feeling precisely?

It is the effort to respect one’s feelings, one’s integrity that leads to radical notions. No revolutionary was ever one for the hell of it: it is too painful a condition. But the pain is eased by its inevitability, given a real problem.

I think of O’Hara, too, in the way Brolaski is capable of high-speed register shifts, the sudden thrilling amp up to the blunt:

if s/o is making a mockery
& yew liable to get thwarted
one needs a quiet room
who hands out thir fucking pronoun paradigm at parties??!!
(“if s/one is mocking let it be tender”)

(Who said of O’Hara that he’d’ve likely found gay liberation “silly . . . but he would have loved the dances”?) Brolaski’s “pronoun paradigm”: a wholly unstable “crew” of available pronouns beyond the “usual”—xe, hir, xem, em, thir, es (one piece accuses the mercenary force now known as Xe Services: “blackwater stole my pronoun”: “one can be in a abîme, complete ruin / as jwlhyfer observd / once you start fucking in the bed / the relationship’s over”). Here’s Brolaski’s taut “Poetics” statement (at Elective Affinities):

My recent work explores etymology as a potential path to knowledge, whereby (to paraphrase Marx) to be radical is to go to the root of the problem. It is also partly an argument for a malleable lexicon: alternative spellings, macaronics, and third gender / gender neutral pronouns: xe, sie, ze, zie, e, ey, they (etc.) in English, li in French, ey in Spanish, etc. This is not wholly neologistic work, at least for English, which has always utilized a great many pronouns, but a way of articulating the legibility of trans & gender variant persons who might fall through the cracks of the binary. I would also consider this a queer poetics that privileges wandering over telos. My studies in linguistics, medieval literature and Apache song tradition also infiltrate my lyric which may manifest (typographically) as prose or verse but is always wanting to be capable of being sung.

That lovely awkwardness of “always wanting to be capable of being sung” evident in something like the opening to “gotham in arrears”:

and vowed the banker’s misunderstood
what crowned the leafy bray of cottonwood
let all the trim gone daisies
be forgot. let bloodbaths
fill the dailies

Evidence both of Brolaski’s adhering to the contemporary (its works and days, its ways and disasters—one reads “tech support in tatters” and “awash in petrodollars” and “alphalegions to the max” and “you think it’s music but it’s like lilies when they fester / all ovular moonlight tusking the apparatus” and “the bees are up to their knees / in a noxious nectar” and, in a poem (“fin city”) “for Sludgie,” the minke whale calf that died in 2007, disoriented in Gowanus Bay, “these itinerant times / one’ yukked getting / toxicity”) and the casualness with which he’s capable of tossing down lyric swetes in unstudy’d English Lit. mimic mode (“last swan of avon”):

now soldiers’re the ones making offers
and fucking caravaggio posters . . .

trimmed by giuliani
not not getting some

the barber tells me
I dabble in opticianry

to the putch
hir shutterybuggery

millefeuille herm
& goat at the ends of mannahatta

who believes
in parallel lives

all spyes for the metropolis
its edge

Is it the hog-calling finale? Here it’s Guy Davenport I think of, the revved up vocab, the sex-hint indelibles. How one thinks he’d admire a solid Anglo-Saxon word like “putch”—no other (meaning, all other) meanings forthcoming. Putch (out of pitch), “to thrust a pointed instrument into or through (a solid body), to stab, run through, pierce.” Putch (out of pouch), “a small bag or sack used for carrying personal items, a (detachable) pocket worn outside a garment.” Putch (out of putsch), “an attempt to overthrow a government by violent means, an insurrection or coup d’état.” Climaxiple delights. 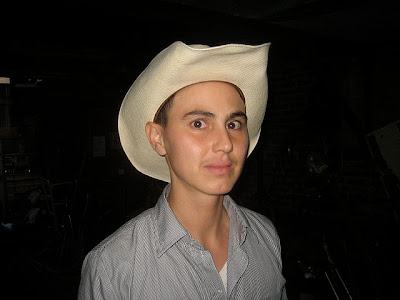