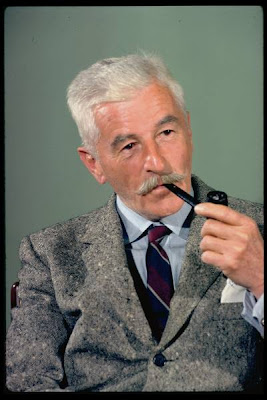 The tuneless reprimand of four a.m. Black maw of night, aimless and rhythmic saw of katydid, reverie’s tawdry presumptuousness. Its vain scribbled urgencies. William Faulkner, out of Intruder in the Dust (1948): “. . . he marveled again at the paucity, the really almost standardised meagreness not of individual vocabularies but of Vocabulary itself . . .” I love how Faulkner—eschewing all preliminaries—begins a speech accepting the 1954 National Book Award for Fiction (for A Fable):

By artist I mean of course everyone who has tried to create something which was not here before him, with no other tools and material than the uncommerciable ones of the human spirit; who has tried to carve, no matter how crudely, on the wall of that final oblivion beyond which he will have to pass, in the tongue of the human spirit ‘Kilroy was here.’
That is primarily, and I think in its essence, all that we ever really tried to do. And I believe we will all agree that we failed. That what we made never quite matched and never will match the shape, the dream of perfection which we inherited and which drove us and will continue to drive us, even after each failure, until anguish frees us and the hand falls still at last.
Maybe it’s just as well that we are doomed to fail, since, as long as we do fail and the hand continues to hold blood, we will try again; where, if we ever did attain the dream, match the shape, scale that ultimate peak of perfection, nothing would remain but to jump off the other side of it into suicide. Which would not only deprive us of our American right to existence, not only inalienable but harmless too, since by our standards, in our culture, the pursuit of art is a peaceful hobby like breeding Dalmations, it would leave refuse in the form of, at best indigence and at worst downright crime resulting from unexhausted energy, to be scavenged and removed and disposed of. While this way, constantly and steadily occupied by, obsessed with, immersed in trying to do the impossible, faced always with the failure which we decline to recognize and accept, we stay out of trouble, keep out of the way of the practical and busy people who carry the burden of America.
So all are happy—the giants of industry and commerce, and the manipulators for profit or power of the mass emotions called government, who carry the tremendous load of geopolitical solvency, the two of which conjoined are America; and the harmless breeders of the spotted dogs (unharmed too, protected, immune in the inalienable right to exhibit our dogs to one another for acclaim, and even to the public too; defended in our right to collect from them at the rate of five or ten dollars for the special signed editions, and even at the rate of thousands to special fanciers named Picasso or Matisse).

Slyly making of art a peccadillo, something of the “least and best of human vanities . . .” Continuing with the ambling reassurance that “even failure is worth while and admirable, provided only that the failure is splendid enough, the dream splendid enough, unattainable enough yet forever valuable enough, since it was of perfection,” and with the admonitory pinch that “one of the things wrong with our country is success. That there is too much success in it. Success is too easy. In our country a young man can gain it with no more than a little industry. He can gain it so quickly and easily that he has not had time to learn the humility to handle it with, or even to discover, realise, that he will need humility . . .” One thinks of the clipped magnificence of Samuel Beckett’s antic laboring (“From now say for be missaid”) in Worstward Ho (1983):

All of old. Nothing else ever. Ever tried. Ever failed. No matter. Try again. Fail again. Fail better.

Or of the lovely Beckettian strictures of what Faulkner might term “significantless speciosity”:

Beckett, too, coining anew against perceived vocabular austerity (“Not to know what they say. Not to know what it is the words it says say . . .”) and athwart the void, the “Unmoreable unlessable unworseable evermost almost void . . .”:

“Standardised meagerness.” Words as nigh vacancies, untenanted markers, voids tossed up against the void.
Posted by John Latta at 6:12 AM