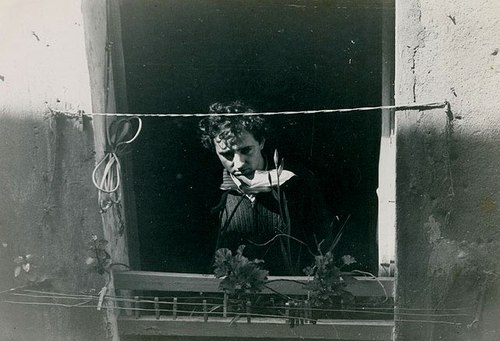 Enrique Vila-Matas, recalling first meeting Roberto Bolaño—“21 November 1996, in Blanes, at the Bar Novo, a Catalan-style tearoom, one of these cafés . . . notable for their immaculate milk-white decoration, places that are actually as horrible as they are supposedly hygienic.” Out of Vila-Matas’s “Blanes or the Writers of Yore” (Archivo Bolaño 1977-2003):

I don’t think I’m fooling myself if I say that, in the Bar Novo that day, it took me no time at all to see or recognise in Bolaño a lunatic hermit or, better said, “a writer of yore,” one of these characters I by then considered were unfindable because I believed that they belonged to a world I’d glimpsed in my youth but that was now forever lost; the kind of writer who never forgets that literature, more than anything else, is a dangerous calling; someone who is not only valiant and who refuses to concede one iota to the prevailing vulgarity but who also displays emphatic authenticity and who fuses life and literature with total naturalness; an incredible survivor of an endangered species; this surprising kind of writer who proudly belongs to a caste of loony, obsessive, manic people who are disturbed in the best sense of the word; obstinate individuals, very obstinate types who already know that everything is false and that, in addition, everything, absolutely everything is finished (and I think that when one is in this situation of fathoming the dimensions of what is false and of the end of everything, then and only then, can obstinacy help, for it can push one to keep pacing round and round the cell so as not to miss the only tiny instant—because this instant does exist—that can save one); individuals who are truly more desperate than the famous revolution, which somehow makes them indirect heirs of the world’s hopeless misanthropes of long ago.
These hopeless characters lived in times when writers were like gods, dwelling in the mountains as desperate hermits or loopy aristocrats. In those days they wrote with the sole purpose of communicating with the dead, had never heard of the market, were mysterious and solitary and breathed the air of the sacred realms of literature. The “writers of yore” are certainly heirs of the enigmatic, misanthropic, desperate hermits of long ago. They are like the shadiest tough guys in the most hazardous dead-end alley and, of course—I say this to add a touch of humour in keeping with the long laughter of all these years—they have nothing in common with the competent grey writers who in their day proliferated so abundantly in the so-called “new Spanish fiction.” The “writers of yore” are in quest of a very personal way of expressing themselves and are not unaware that in this way there might still be—after the end of the old, great prose and after the almost definitive demise of literature—a path, perhaps the last path to be taken.

Something of Vila-Matas’s barrage, its demand for a kind of defiant (and reckless) purity, recalling Ted Berrigan. (See Berrigan’s lines: “Purity means that you have something up / Your sleeve besides a right or a left arm. My / Arms are shot but my something is not.”) Out of Bolaño’s The Unknown University (2013), “Un Soneto,” translated by Laura Healy:

16 years ago Ted Berrigan published
his Sonnets. Mario passed the book around
the leprosaria of Paris. Now Mario
is in Mexico and The Sonnets on
a bookshelf I built with my own
hands. I think I found the wood
near Montealegre nursing home
and I built the shelf with Lola. In
the winter of ’78, in Barcelona, when
I still lived with Lola! And now it’s been 16 years
since Ted Berrigan published his book
and maybe 17 or 18 since he wrote it
and some mornings, some afternoons,
lost in a local theatre I try reading it,
when the film ends and they turn on the light.

And, pertinently, in “our” time of increasingly fatuous gabble:

Poets from Spain and Latin America, literature’s most
Infamous, surged like rats from the depths of my dream
And strung their squeaks together in a chorus of minim voices:
Don’t worry, Roberto, they said, we’ll make sure
You disappear, neither your immaculate bones
Nor your writings which we spit out and ably plagiarize
Will surface from the shipwreck. Neither your eyes, nor your balls,
Will be saved from this dress rehearsal of sinking. And I saw
Their satisfied little faces, solemn cultural attache’s and rosy
Editors-in-chief, manuscript readers and poor
Copy editors, poets of the Spanish language, who go by the name of
Horde, the best, the pestilent rats, well versed
In the cold art of surviving in exchange for excrement,
Of public terror maneuvers, mass market Neruda
And Octavio Paz, cold swine, an apse
Or scratch on the Great Building of Power.
Horde holding title to the adolescent’s dream and to writing.
My God! Under this fat greasy sun that kills
And belittles us.