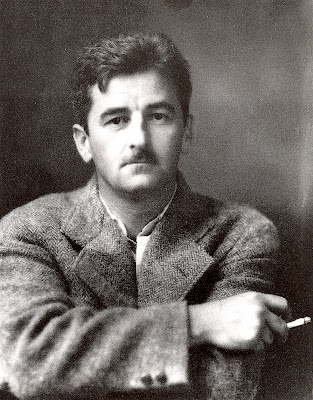 William Faulkner, out of an 18 February 1946 letter to Malcolm Cowley, parsing the writerly categorical difference between fact and truth:

I dont care much for facts, you cant stand a fact up, you've got to prop it up, and when you move to one side a little and look at it from that angle, it's not thick enough to cast a shadow in that direction. But in truth, though maybe what I mean by truth is humility and maybe what I think is humility is really immitigable pride. I would have preferred nothing at all prior to the instant I began to write, as though Faulkner and Typewriter were concomitant, coadjutant and without past on the moment they first faced each other at the suitable (nameless) table.

Monstrously shrewd capture of the way the daubs and fancies of the world itself must needs fall away under the all-eschewing onslaught of writing. (Recalling, too, Keats’s “being in uncertainties, Mysteries, doubts, without any irritable reaching after fact and reason . . .” and the chiding of Coleridge who “would let go by a fine isolated verisimilitude caught from the Penetralium of mystery, from being incapable of remaining content with half knowledge . . .”)

That careeringest onslaught, galloping nigh out of control, its wild verges and convergences, its dash improprieties. Here’s Faulkner, “immitigable,” talking about man’s “enslavement to the demonic progeny of his own mechanical curiosity,” out of A Fable (1954):

He has already begun to put wheels under his patio his terrace and his front veranda; even at my age I may see the day when what was once his house has become a storage-place for his bed and stove and razor and spare clothing; you with your youth could (remember that bird) see the day when he will have invented his own private climate and moved it stove bathroom bed clothing kitchen and all into his automobile and what he once called home will have vanished from human lexicon: so that he wont dismount from his automobile at all because he wont need to: the entire earth one unbroken machined de-mountained dis-rivered expanse of concrete paving protuberanceless by tree or bush or house or anything which might constitute a corner or a threat to visibility, and man in his terrapin myriads enclosed clothesless from birth in his individual wheeled and glovelike envelope, with pipes and hoses leading upward from underground reservoirs to charge him with one composite squirt which at one mutual instant will fuel his mobility, pander his lusts, sate his appetites and fire his dreams; peripatetic, unceasing and long since no longer countable, to die at last at the click of an automatic circuit-breaker on a speedometer dial, and, long since freed of bone and organ and gut, leaving nothing for communal scavenging but a rusting and odorless shell—the shell which he does not get out of because he does not need to but which presently for a time he will not emerge from because he does not dare because the shell will be his only protection from the hail-like iron refuse from his wars . . .

(Recalling Guy Davenport’s fierce contempt for the automobile, “the mechanical cockroach that has eaten our cities.” And: “the machine that stole the city’s rationale for being.” “A man in an automobile is as active as a sloth.”)

“The cold-blooded ruses of the yelping sophists fill the crowds with contempt.” Four newish pieces (out of the clumsily monickered manuscript, Arrangements and Tendencies) here, in Aidan Semmens’s recently resurrected Molly Bloom.
Posted by John Latta at 6:15 AM