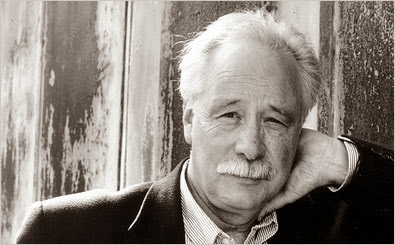 There seems to be no remedy to the vice of literature; those afflicted persist in the habit despite the fact that there is no longer any pleasure to be derived from it, even at that critical age when . . . one every day runs the risk of becoming simpleminded, and longs for nothing more than to put a halt to the wheels ceaselessly turning in one’s head . . .

Sebald’s root uneasiness with writing, its tendency towards an unthwartable graphomania. Recall the squib out of Sebald’s Unrecounted (2004): “This writing paper // smells / like wood shavings / inside the coffin.”

Everything is on the point of decline, and only the weeds flourish: bindweed strangles the shrubs, the yellow roots of nettles creep onward in the soil, burdock stands a whole head taller than oneself, brown rot and greenfly are everywhere, and even the sheets of paper on which one endeavours to put together a few words and a sentence seem covered in mildew. For days and weeks on end one racks one’s brains to no avail, and, if asked, one could not say whether one goes on writing purely out of habit, or a craving for admiration, or because one knows not how to do anything other, or out of sheer wonderment, despair or outrage, any more than one could say whether writing renders one more perceptive or more insane.

A line, found in a notebook, regarding a story of how wrestlers “must maintain vigilance against swollen cartilage in their bruised ears, and drain such with a needle unless they cauliflower.” Writing’s way of siphoning off the hurly-burly, the excess.

Of the unstoppable Jean-Jacques Rousseau, who, out walking, made notes on playing cards for the Rêveries d’un promeneur solitaire (1782), Sebald writes in the essay “J’aurais voulu que ce lac eût été l’Océan . . .: On the occasion of a visit to the Île Saint-Pierre”:

Although Rousseau was by no means idle as an author in the few weeks he spent on the Île Saint-Pierre, in retrospect he nonetheless came to see this time as an attempt to free himself from the exigencies of literary production. He talks of how he longs now for something other than literary renown, the scent of which, as he says, revolted him from the very moment he first got a whiff of it. The dégoût Rousseau now felt with regard to literature was not merely an intermittent emotional reaction but something that for him always went hand in hand with the act of writing. In accordance with his doctrine of the formerly unspoiled state of nature, he saw the man who reflects as a depraved animal perverted from its natural state, and reflection as a degraded form of mental energy.

A mordant phrase out of Sebald’s essay “Why I grieve I do not know: A memento of Mörike”: “a different kind of mountebank career from that of writing—that rather vicarious vice whose clutches those who have once embarked upon it rarely succeed in escaping.”

Seemingly fatal burgeonings partout. Out of Sebald’s “As Day and Night . . .: On the paintings of Jan Peter Tripp”:

The photographic image makes a tautology of reality. When Cartier-Bresson goes to China, writes Susan Sontag, he shows that there are people in China and that these people are Chinese. What may be true of photography, though, is not necessarily applicable to art. The latter depends on ambiguity, polyvalence, resonance, obfuscation and illumination, in short, the transcending of that which, according to an ineluctable law, has necessarily to be the case. Roland Barthes saw in the—now omnipresent—man with a camera an agent of death, and in photographs something like the relics of life continually giving way to death. Where art differs from such a morbid affair is in the fact that the proximity of life to death is its subject, not its obsession. Art deploys the deconstruction of outward appearances as a means of countering the obliteration, in endless series of reproductions, of the visible world.

To stop writing: “a means of countering the obliteration, in endless series of reproductions, of the visible world.” 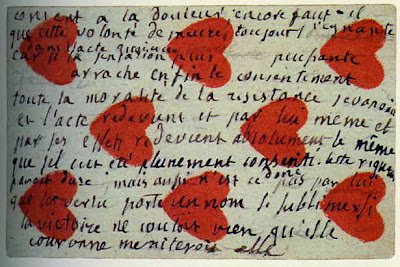 Eight of Hearts, with jottings by Jean-Jacques Rousseau.
(One of the twenty-seven playing cards found with the unfinished manuscript of Les Rêveries d’un promeneur solitaire at the death of Rousseau in 1778.)