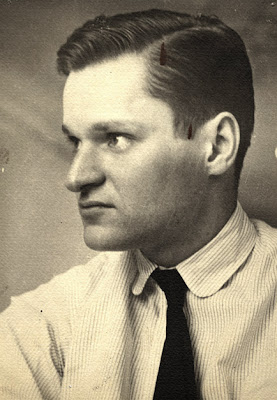 Out of an undated number (Vol. I, No. 3, circa 1953) of the John Bernard Myers-edited sheet Semi-Colon, an uncollected John Ashbery collage—a piece Ted Berrigan reprinted (lacking the sub-title) in C: A Journal of Poetry (Vol. I, No. 10, 1965) a decade or so later:

(A collage made from Roget’s Thesaurus)

Work or operate on or upon.
Stir, set astir, stir up, stir the blood.
Fillip, give a fillip.
Illumine.
Illuminate; fire, set on fire; inflame.
Apply the torch, fire, or warm the blood.
Fan, fan into a flame, fan the fire or flame.
Blow the coals, stir the embers, feed the fire, add fuel to the fire.

Voice of the charmer, flattering tongue, unctuousness, mealymouthedness, etc.,
Humor, soothe, pet, coquet, slaver, beslaver, beslubber, beplaster, pat on the back, puff.
Fool to the top of one’s bent.
Do one proud, pull one’s leg, sawder, soft-sawder, soft-
Soap, butter, honey, jolly, blarney, lay
It on, lay it on thick [all coll.]; lay it
On with a trowel, string, string along,
Honeyfogle [U.S.], oil, soap [all slang];
Make things pleasant, gild the pill.

What is the use of running when you are
On the wrong road—J. Ray. Mentis gratissimus error—A most pleasant
apprehension.—Horace.
One goes to the right, the other to the left; both err, but in different ways.—Horace.
Who errs and mends, to God him-
Self commends.—Cervantes. To err is human, to forgive
Divine.—Pope. Errors is worse than ignorance.—P. J. Bailey.

Off the track; on a false scent,
On the wrong scent or
Trail, up the wrong tree; at cross pur-
Poses.

Dull, dullsome, dull as dish water.
“The face
That launched a thousand ships.”
Wind-swept, bleak, raw, exposed,
The storm is up and all is on the hazard,
Rainy, showery, pluvious.

Avant-courier, avant-coureur or avant courrier,
Disentangle.
Vice-sultan, vice-caliph, vice-queen,
Bitter as gall.
Liqueur, cordial, sweet wine, punch,
Beanstalk.
“Leave not a rack behind.”
All moonshine, all stuff and nonsense, all tommyrot,
“Thick as autumnal leaves that strow the brooks in Vallambrosa.”
Bags, barrels, tons, flock,
In one’s stead.
Prolocutrice or prolocutrix,
Accept the stewardship of the Chiltern hundreds.
View with disfavor, view with dark or jaundiced eyes,
Loblolly pine.
Ineptitude, inaptitude,
“As like as eggs,”
Swim or go with the stream.
Myrtle, turtledove, Cupid’s bow,
Cupid’s dart; love token etc. 902-5,
Bewitch, enrapture, inflame with love, carry away, turn the head.
Once in a blue moon [coll.],
Once in a coon’s age [coll.],
Continually, incessantly, without ceasing, at all times, ever and anon;
Every day, every hour, every moment,
Daily, hourly, etc.
Daily and hourly, night and day, day and night, morning, noon and night,
Hour after hour, day after day, month after month, year after year,
Day in day out, month in month out, year in year out;
Perpetually, always etc. 112.5; invariably etc. 16.7.
Wander etc. from the truth,
Be in the wrong, be in the wrong box,
Bark up the wrong tree, back the wrong horse,
Aim at a pigeon and kill a crow,
Take or get the wrong sow by the ear,
The wrong pig by the tail, or the wrong bull by the horns,
Put the saddle on the wrong horse, count one’s chickens before they are hatched,
Reckon without one’s host, misbelieve, sin,
By special favor, yes, by all means.

I refuse! By no manner of means! I will not! Far be it from me!
Not if I can help it! I won’t! Like fun I will!
Count me out! You have another guess coming! Catch me!

Volunteer, come forward, be a candidate,
Barkis is willin’.

Don’t! Don’t do that! Enough!
No more of that! That will never do! Leave off! Hands off!
Keep off! Keep off the grass! Hold! Stop! etc.
Refusal, refusing, declining, etc.

Leave alone, leave it to me,
Leave the door open, open the door to.
Open the floodgates, give the reins to etc. (allow freedom).

Worth a king’s ransom,
Precious as the apple of the eye.

Good as gold,
Priceless, beyond price.

A wry assemblage—replete with notational Thesaurus-oid mannerisms (“Cupid’s dart; love token etc. 902-5”), rhythmically humorous swells (“First-rate. First-class. First-chop. / Top-hole. Bang-up. Tiptop. / Top-notch . . .”), bemusedly emphatic discernments (“The wrong pig by the tail, or the wrong bull by the horns”), the fussy demotic (“yes, by all means”) in cohort with the literary refractory (“Barkis is willin’”) and the chronic human will to connect, melancholic or giddy (“all stuff and nonsense, all tommyrot, / ‘Thick as autumnal leaves that strow the brooks in Vallambrosa’”)—of lingual detritus high and low.* I see in “Hoboken” a direct predecessor of some of the lists found in Ashbery’s book-length poem with Joe Brainard, The Vermont Notebook (1975). See something like:

Or the slightly recherché (possibly Thesaurus-generated?):

Something plausibly conceptualist avant la lettre in the way “Hoboken” flaunts the anti-expressionist marks of its making—Ashbery’s is a flaunt performed with a shrug (against the ostentatious squeals of self-import of “our” contemporary purveyors).

* Something in the grand range of lingual elements Ashbery’s selected recalls these lines out of “The Recital”—in Three Poems (1972):

The point was the synthesis of very simple elements in a new and strong, as opposed to old and weak, relation to one another. Why hadn’t this been possible in the earlier days of experimentation, of bleak, barren living that didn’t seem to be leading anywhere and it couldn’t have mattered less? Probably because not enough of what made it up had taken on that look of worn familiarity, like pebbles polished over and over again by the sea, that made it possible for the old to blend inconspicuously with the new in a union too subtle to cause any comment that would have shattered its purpose forever. But already it was hard to distinguish the new elements from the old, so calculated and easygoing was the fusion, the partnership that was the only element now, and which was even now fading rapidly from memory, so perfect was its assimilation by the bystanders and décor that in other times would have filled up the view, and that now were becoming as transparent as the substance that was giving them back to life.

Regarding that “assimilation by . . . bystanders and décor”: how quickly the piece’s—“Hoboken”’s—constructedness begins to seem “natural.” How the explicatory sub-title “(A collage made from Roget’s Thesaurus)” is already, circa 1965, scratched by Berrigan in the reprinting, presumably a sort of redundancy. The room subsumed by its viewing.