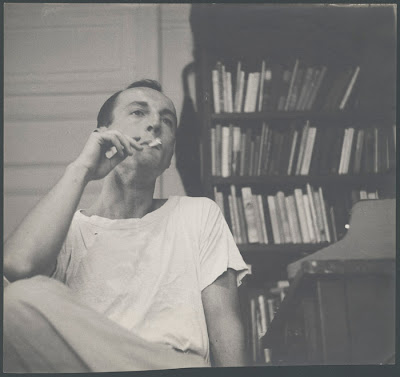 A piece by Frank O’Hara and Kenneth Koch out of the John Bernard Myers-edited Semi-Colon (Vol. II, No. 1), the rather ephemeral folded sheet (four pages) printed for the Tibor de Nagy Gallery, circa 1954:

They are debating over the daffodil seeds
in history. Quaff these jeweled belches
for isn’t there whichness in the thinking apparatus
that glides towards cruelty as commonly as a bench?
Yes I am inverting my bricks.
Santa Claus, please bring me a barefoot match
that never finds itself
like a needle in the nose. Bad and nasty
are the crisscrosses whose films naughty daisy unheeds
as if there were tulips singing “Rattan, grow down”
and the empire of phosporous cheesecake also.

Oh let me. Yet I think of myself as being impossibly happy
like a licensee who has been appointed to health-juices
it’s so moving to be moving, O Everest your nose grows down
the steep side of California-happy gypsy dominoes. Pets!
You do intend to love us like a helicopter landing
on the frozen faces of these hen-indented planets, O basement
always yiping until one feels like a nagged bore
whose films are growing like a daisy method in you, basement,
basement, always twitching like a Bostonian, get out,
like!
O marinated herring of these twelve blue eyes!

Are you gasping with astonishment at the hideboundness?
Aren’t there packs of your best Chinese star?
I’m not going to persuade you to cuckold the Ringling Brothers-Barnum
and Bailey world
of chin-faced sadness, O Labrador of teasing neck-sacks,
and all of it of such an ofness
beyond the caress of displaced piano
tra-la. Let’s tra-la it. Aren’t you William Tell?
Will you em tell? Oh it wool int. baby ex fair ill nnnn tell
and it is true or my name isn’t ick. Well, ick then. Ick.
Nice coolness oh erp, axe, fair, fare, pink, trees! pangs! oh its jamas

dun carp orange trees escaping the cylinder, isn’t
every car a field of ringing hash, O motors of velvet?
Carolina moon, keep it up as long as you can, and you can
be a bee, or if you like, a giant pea, a big kimono factory
shuffling its enormous hams up and down the street.
A boat must quietly sing, “My cheers of tall roses
which are as Russian as an English novel” in C,
and the baseball said, “My head was filled; the Redsox
are reading Hudibras on the tenement roof this July.”
And I looked—O poor crybaby, it is the Mediterranean—our hugs sent back!

(Resisting the urge to make “phosporous” “phosphorous” and “yiping” “yipping” or to reckon that emphatic and unindented singularity “like!” simply a carryover belonging the previous line.) All the dross and excess and forcedness (“the merely zany”) of the usual collaboratory stint, I suppose, along with the occasional marvels that redeem its longueurs, made, perhaps, possible by them. I particularly like the rather Steinian “isn’t there whichness in the thinking apparatus / that glides towards cruelty as commonly as a bench?” along with “and all of it of such an ofness”: who’s been reading “Stanzas in Meditation”? And, too, the palpably right nonsense of: “these hen-indented planets” and “a big kimono factory / shuffling its enormous hams up and down the street.” Is the title vaguely Duchampian? Somewhere in Tracking the Marvelous, John Bernard Myers’s 1983 memoir, he quotes René Magritte: “The titles of the pictures were chosen in such a way as to inspire a justifiable mistrust of any tendency the spectator might have to over-ready self-assurance.”* The sort of line one thinks of John Ashbery cottoning to, bemusedly unrued. O’Hara and Koch’s other piece in the issue:

A piece that’d seem to align somewhat with Joseph Ceravolo’s later lines (out of “Drunken Winter”): “Oak oak! like like / it then / cold some wild paddle / so sky then . . .” Roughly forty years later, Kenneth Koch, in “A Time Zone” (Apollinaire’s “Zone” provides the epigraph, and the clumsy itinerant rhyme-scheme: “On y loue des chambres en latine Cubicula locanda / Je m’en souviens j’y ai passé trois jours et autant à Gouda”—“There they let their rooms in Latin cubicula locanda / I remember I spent three days there and as many in Gouda” is how Beckett rendered it) writes:

. . .
I am pulled in one direction by Sweden in another by Spain
The idea of staying in Europe jolts me gives a convincing jerk
It’s New York though where most of my friends are and the “new work”
Today with Frank O’Hara a lunch connection
The Museum of Modern Art is showing its Arp collection
Frank comes out of the doorway in his necktie and his coat
It is a day on which it would be good to vote
Autumn a crisp Republicanism is in the air tie and coat
Soon to be trounced by the Democrats personified as a slung-over-the-shoulder coat
Fascism in the form of a bank
Gives way to a shining restaurant that opens its doors with a clank
However before being taken into this odoriferous coffer
A little hard-as-a-hat poem to the day we offer
“Sky / woof woof! / harp”
This is repeated ten times
Each word is one line so the whole poem is thirty lines
It’s a poem composed in a moment
On the sidewalk about fifteen blocks from the Alice in Wonderland Monument
Sky woof woof! harp is published in Semicolon
Later than this in this John Myers publication
O’Hara meanwhile is bending above his shirt
His mind being and putting mine on being on International Alert
There’s no self-praise in his gossip
Which in fact isn’t gossip but like an artistic air-trip
To all the greatest monuments of America and Europe
Relayed in a mild excited wide open-eyed smiling conversational style
. . .

Making “Sky / woof woof! / harp” a piece composed on the street, O’Hara-style. (Though one wonders how the onerous / humorous repeatedness of the three lines occurred, Koch’s wrongly recalled “ten”. . .) Included, too, in the issue of Semi-colon** is a sort of reduced-means virtuosic piece by Koch, a one-word sestina, defiantly bravura material, and seemingly uncollected:

In the Gas Station

Pretty Anne, the manageress of “The Mud Point,”
Ran out in her calico apron, inviting them to point
To the gas variety they wished, thereby making a point.
She smiled up at the balsam dog in point.
“I like things to come to a point,”
She reflected, dreamily. “There’s a certain point

After which, well gosh, gee, there’s just no point!”
Pa dashed from the car and began to point
To the Ethyl tank. Baby watched the point
Of the gas-meter—Oh how it quavered! “You point,”
Ma reproached Pa, “but it ain’t polite to point.”
Anne filled up their tank to the final point.

“That’s what I call coming to the point!”
Fairfield screeched, racing out of the “The Mud Point”
Gas station office. “Anne, you’ve proved your point!
It is easier to take care of customers when they point.”
Anne said, “Ma mie, the balsam dog’s in point.”
The family, Pa and so on, didn’t get the point.

Pa jested, “Well, let’s get to the unpleasant point!
How much is the gas?” Fairfield and Anne looked at the meter’s point.
Baby and Freddy together cried, “Oh look at it point!”
Anne handed Pa a bill, said, “You must pay up to this point.”
Pa said, “It’s not fun when you get to this point.”
Then he paid them. He said, “How far are we from the Point?”

Fairfield said, “Do you see up ahead there that point?
Well, that is what we generally know as the Point.”
Pa thanked him. He moved the car so it’d point
Straight for the place he had been instructed was the Point.
Ma said, “It will be good, after so long, to get to the Point!”
Baby sat on Fred’s lap, still staring fascinatedly at the point.

The car drove off to the Point. Fairfield said, “It’s a fine point,
Anne, I’ve learned from you, but it’s a point.” “No need to point,
Dear,” Anne said, “when there’s an obvious point.” In the wind waved the balsam
dog in point.

* The line is out of Magritte’s piece called “Lifeline,” printed in the 1946 “Surrealism in Belgium” number of the Parker Tyler and Charles Henri Ford-edited Surrealist magazine View.

** I am leaving out Koch’s “Collected Poems,” printed side by side with “Collected Proses,” O’Hara’s “answer.” If Koch, in the series of miniatures, is “interested in the relationship between poems and their titles” (see note in Koch’s 1994 On the Great Atlantic Rainway: Selected Poems 1950-1988), O’Hara insists on that relationship’s being one of unfettered wit and repartee. Koch:

SLEEP
The bantam hen frayed its passage through the soft clouds.

SLEEP
At present writing The Prodigal starring Lana Turner has run for 30 seconds.

A MINERAL WICK
He went to sleep quickly in the garage, puffing away on his exhaustion. 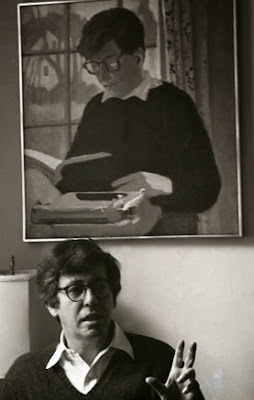