Swag on a Mirror CCXLVI
Upend the jaunty temporary, and descry the autochthonous terse
and succinct. [And so on interminably.]
Reveries of progress in the endless random bumpings of the Brownian
field. Doctor Williams deriding
The usual boner model of verse—“an assembly of ankylosed lines”
(something like a slab of ribs).
Laura Riding, “much preoccupied to make personally explicit the identity
of myself poet” (and, too, “myself” vehemently not),
Contract’d a basic form of artifice, made a few drawings, wrote something
accompanying in French d’abord
(The “poetic deshabille” intend’d to strip it all down to the “literal”—
whatever it is).
Then she lit a corn-colour’d Gitane, puff’d rapidly, board’d an ocean
liner for Wabasso, Florida, and a tellingly small bungalow.

The dog’s shuddery sleep of half-yelps, flank-seizures, pawings
at ancient wound-suture lines.
Splay of Pythagorean dog vocabulary in the pant and seriatum yip, up
and barking now. Several Saturdays
Of bones in the backyard, dog-indifferently abandon’d out in the weeds,
a dummy arrangement
Unperturb’d by any numb rectifying promissory utterance beyond
itself, bones
Unrecuperable, immagisterial, bode. Above—an adequate moon, mannish
and puling, whiteness of saw’d bone.
Nary a quiver at the monstrous sketchiness of things unnamed
and rampant.
In the primal verdure—dog-tangibles, dog-swag.

Ah. Combating “A Year” fatigue, the kind that usually demands a different-sized “tin” (for the pouring of my pork butt and shoulder scraps into), a different “gel.” And defiantly (stubbornly) convinced one must needs insist on continuing—runner waiting for the endorphins to kick in—what I’ve come to think of in terms of a hinged mirror, two seven-liners looking “at” one another. (A sense that likely resides precisely—only in my somewhat tarnish’d brain-pan.) Robert Morgan (back in the water’d-down deep image ’seventies) in a little ditty I always liked, that Borgesian trumping of one mirror with another, worm with walnut, gall with minaret: 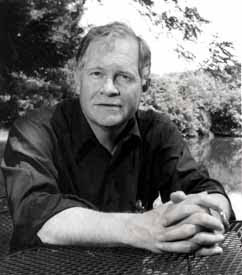 Out of Werner Herzog’s Conquest of the Useless (Ecco, 2009), the journals (translated by Krishna Winston) Herzog kept during the filming of Fitzcarraldo (1982) in Peru (“inner landscapes, born of the delirium of the jungle”):

A vision had seized hold of me, like the demented fury of a hound that has sunk its teeth into the leg of a deer carcass and is shaking and tugging at the downed game so frantically that the hunter gives up trying to calm him. It was the vision of a large steamship scaling a hill under its own steam, working its way up a steep slope in the jungle while above this natural landscape, which shatters the weak and the strong with equal ferocity, soars the voice of Caruso, silencing all the pain and all the voices of the primeval forest and drowning out all birdsong. To be more precise: bird cries, for in this setting left unfinished and abandoned by God in wrath, the birds do not sing; they shriek in pain, and confused trees tangle with one another like battling Titans, from horizon to horizon, in a steaming creation still being formed. Fog-panting and exhausted they stand in this unreal world, in unreal misery—and I, like a stanza in a poem written in an unknown foreign tongue, am shaken to the core.

Indelibly, out of Les Blank’s excellent Burden of Dreams (1982): Herzog being film’d in a green-soak’d tangle, soundtrack a ruckus of piercing calls unidentifiable, and Herzog in clipped German accent, with an noticeable excess of glee: “Even the birds shriek in agony.” (And Caruso: I succumb to Caruso in San Francisco during the earthquake of 1906. Pottering about bewilder’d in the aftermath, muttering at the rubble, dazedly noting the fires, imploring nobody in particular, nobody in particular about. Something the novelist Michael Parker dash’d into my brain-pan a number of years back.) Herzog, going up the Río Marañón (4 July 1979):

I doubt the boat will make it through the Pongo de Manseriche rapids. I bought a few grams of gold dust in a little medicine bottle with a cork stopper. In Saramiriza the entire riverbank had been washed away, and soon the village will be swept away, too. An attempt was made to reinforce the oil depot with iron braces, but now the supports are standing in water, with the shore completely gone.
A small green parrot with a yellow breast and black crest landed on my finger and preened. Its feet, gripping my finger, are very warm. A yellow-spotted kitten was lying outside in the dirt, dying . . . On the large, smooth leaves of a banana plant droplets form; they are the color of silver balls. Wood and gold are the kitchen words. A fragment of speech floated to me on a rain shower; the Italians had apparently found gold in the Pongo. Next to me a parrot screeched and giggled like a human being. It kept calling in Spanish, “Run, Aureliano,” and would not stop. It was like the soundtrack of a Woody Woodpecker film. “Birds are smart, but they cannot speak,” Fitzcarraldo would teach his parrot to say in the film. The dead drag the living down with them.
In the godforsaken garrison of Borja, below the rapids, an Indian soldier was reading Clausewitz in a Spanish translation. In the Pongo our engine died twice because the waves buffeted the boat so hard that the gas tank was tripped off . . .
In the Río Santiago the body of a soldier who had been shot came floating along, on his back, swollen, the legs bent at the knees and the arms bent likewise; he looked as if he were raising his hands. Birds had already hacked out his eyes and eaten away part of the face. The comandante here advised letting him float by—so as to avoid any trouble; they would have to deal with him farther downstream. He gave the swimmer a gentle nudge with his boot, and the corpse spun around once before the current took hold of him. . . .
For the first time I saw cacao, freshly harvested. I peeled the kernel, which looks like a large, misshapen bean, and was disappointed by the bitter taste, for what is inside looks like chocolate. Our canister with twenty-six kilos of pure curare, for poisoning arrow tips, made a great impression. For a spoonful of this black, sticky mass, you can get yourself a woman to marry, I was told in a respectful whisper by a boatman, as he cleaned his toes with a screwdriver. Here all the proportions are off; the fishhooks in the little general store are as big as my palm, and bigger. The Indians paint their faces black, which makes them invisible.

And Herzog’s books that he pages aimlessly through after learning of the accidental death (elsewhere) of one Larisa Shepitko (identify’d under “Persons and Places” by “Ukrainian director in the former USSR of films such as The Ascent and Wings. Gymnast and basketball player on the national team.” A cavalcade of oddities there: there is list’d, too, one Kitty Witwer: “Former Playboy Bunny, sheriff, warden of a San Francisco prison.”) The books Herzog carries: “Gregorovius’s History of Rome, Chatwin’s In Patagonia, the King James Bible, a Spanish grammar, Quirinius Kuhlmann’s Kühlpsalter, Joseph Roth’s Job, Livy’s Second Punic War. . .” He notes, paging in grief, “found no comfort.” And:

There is not a soul in the Saramiriza school, a rickety wooden structure. The hastily nailed-together wooden benches are deserted, and on the walls hang posters showing the nervous system, the useful and harmful animals, the muscles, the cow’s stomachs. A child’s pencil drawing shows a cow, and beneath it various products from the cow are nailed to a board: representing leather, a piece from a battered, decommissioned soccer ball, a section of a belt, a shoe brush, gummy with black polish, but no shoe, not even a small piece of one. Representing cheese, pieces of tins from New Zealand that once contained cheese spread; representing butter, three pieces of some kind of tin with an Australian label, in several sizes, probably taken from the lid and the body, each with a red ostrich feather; representing milk, tins from Nestlé and Ideal. A dog ran by on three legs. In the general store I took two warm Cokes from the refrigerator, which was not working and had become a breeding ground for cockroaches.

The general store (“a total of two shelves”) sells “T-shirts in cloudy plastic wrappers, the shirts wrinkled and discolored from exposure to the climate; also some rubber balls, padlocks, flashlight batteries.” “The entire upper shelf ifs filled with pictures of saints, the cheapest kind of print, the last gasp of the Nazarenes.” 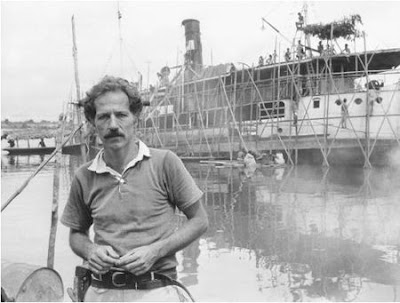